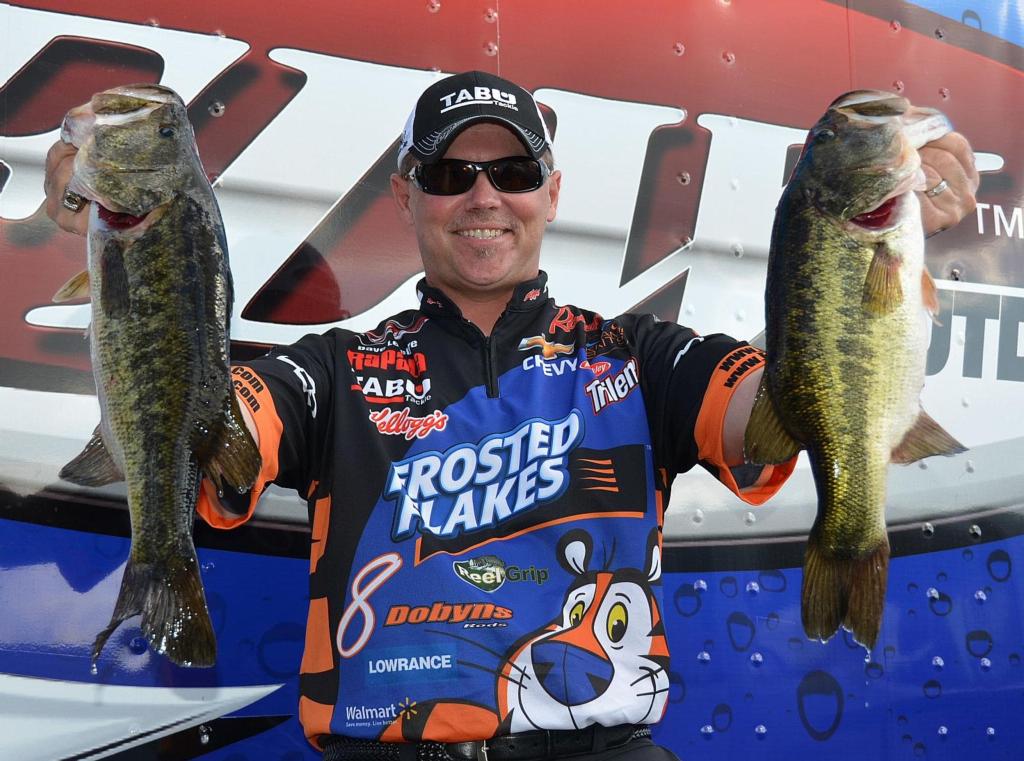 (Editor’s note: Veteran bass pro Dave Lefebre has agreed to take time to share his insights into each FLW Tour event of the 2011 season. After every event, Lefebre will give his thoughts on tournament strategy, winning techniques and other behind-the-scenes stories/information that is compelling to our readers. The following blog represents his 11th installment. Lefebre ultimately finished the FLW Tour Lake Champlain event in 32nd place with a two-day total of 26 pounds, 6 ounces. For his efforts, Lefebre walked away with over $10,000 in winnings.)

Can you say Alabama rig? We wrapped up the 2011 FLW Tour season this weekend on Lake Guntersville and a new, strange way of fishing showed up … big time. It’s actually called an umbrella rig, nothing new to striper and saltwater fishing, but until now, it was unheard of in tournament bass fishing. The rig has five thin wires, each with a snap swivel attached to them so that you can use whatever lure you wish on each wire. It has been named the Alabama rig and if you weren’t throwing it you weren’t winning; it’s as simple as that.

Paul Elias threw it every day of the tournament and won the event with 103 pounds. Very few others were throwing this rig on day one, but by day three practically everyone in the top 20 had the rig tied on. And on day four, eight of the top 10 were using it. I personally saw Jacob Powroznik and Anthony Gagliardi throwing the rig on day one as both came through the area I was fishing. Both went on to make the top 10. As far as I know, the others wisely jumped on the Alabama rig bandwagon as the event progressed.

I had an interesting practice to put it mildly. I blew my powerhead (motor) at 6 am on Sunday, the first morning of practice. Since it was Sunday, I couldn’t get a hold of anyone to get it fixed, so I basically lost that day. Art Ferguson was nice enough to take me out in his boat for a few hours so I could at least get a general look at the lake. We caught a few fish, but mostly just rode around.

On day two I decided to fish out of my boat with just the trolling motor. I planned on launching at several different boat ramps to just try to make the best of it. Well as soon as I got a mile away from the first ramp at 7 am, the dealership called and told me to get my boat there as soon as possible. So I got the boat on the trailer and drove two hours north to Chattanooga Fish n Fun.

I dropped my boat off there with Mr. Hass and the boys and headed back to Guntersville. A co-angler fishing in the tournament heard I needed a boat and offered me his rig, so Tom Rizzo (my practice partner), Dan Ferguson, and I went out in the afternoon for a couple hours. I checked a couple spots and had four bites but we caught nothing. Thankfully, Dan was nice enough to offer Tom and I his boat for the next and final day of practice. Finally I was able to spend a full day on the water, but after it was over I still didn’t feel confident that I could catch a limit anywhere.

I basically started the tournament as if it were another day of practice. I now had my own boat, which was good, except I had to break in my new motor. I could only go about 30 mph all day. It was painful, but around noon I managed to find a little area and catch a good limit of around 15 pounds. On day two, I went back to that area and caught 11 1/2 pounds to finish 32nd in the event, about 2 1/2 pounds out of the cut. I found that area by seeing the shad flickering on the surface from a couple hundred yards away. There were a few small white bass busting the shad, but when I slow-rolled a small swimbait under the bait I found out that there were bass there. It took a lot of switching weights, sizes, and colors of swimbaits, but once I got the right combination they ate it. It was awesome!

I had the best action on a 3 1/2-inch gizzard shad Berkley Hollow Belly with a 3/0 belly weighted hook. They ate it better when I used a smaller 3/16-ounce weight and a red hook too. I was casting it as far as I could in 6 to 8 feet of water, letting it sink all the way to the bottom, and then reeling it as slowly as could.

The fishing at Guntersville was bar far the toughest I’ve ever seen, but the grass was by far the best I’ve ever seen. The key for this event was fishing around the shad out off of the grass. There will always be some success flipping the mats and throwing surface frogs here. But this time the baitfish pattern, with shad-imitation baits, like swimbaits, crankbaits, spinnerbaits and spoons prevailed.

Overall, it was stressful week, but a rewarding end to the season. I didn’t win, but my goal was to make the top five in the FLW Tour Open Angler of the Year standings and qualify for the 2012 Forrest Wood Cup on Lake Lanier, Ga., next summer. I ultimately finished in second place, so I’ll be going to Lake Lanier and fishing the 2012 FLW Tour season with a little less pressure on my shoulders. In closing, I had a great time recapping this 2011 FLW Tour season and giving you an inside look into my year. I’m looking forward to starting fresh in 2012!