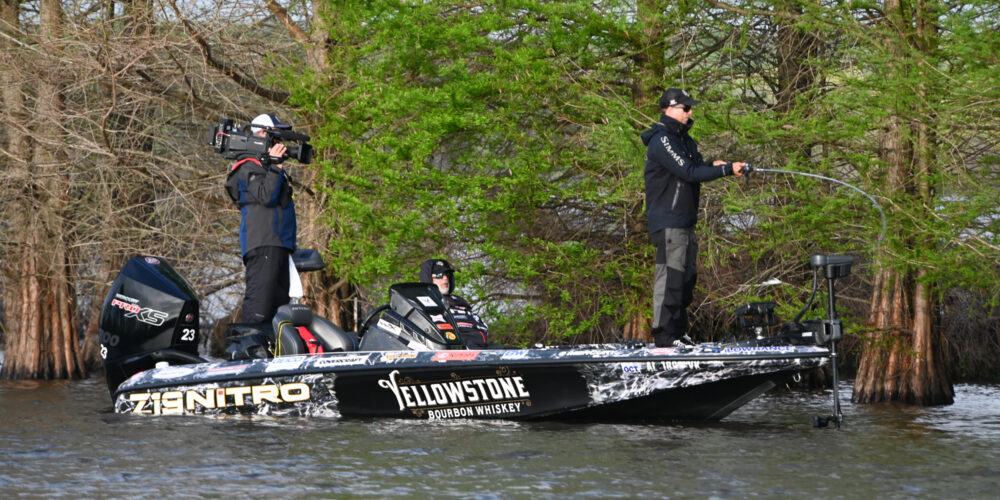 I just got to Lake of the Ozarks for Bass Pro Tour Stage Four, and looking back on my last event, I’m very thankful for the fish I caught at Heavy Hitters on Lake Palestine – especially for the big one I landed on the first day of competition. That bass earned me $25,000, made it a great trip to Texas and hopefully gave me some momentum heading into the second half of the season.

If you saw the video, you know it was an epic frog bite, and I’m still amazed I landed that 8-pound, 5-ounce bass.

Looking back at my career, it’s funny that I always seem to catch the big bass when it matters most, and I’ve been blessed with some great catches at the right time. During the old days of the Toyota Texas Bass Classic, they awarded a Tundra truck to the biggest fish of the event, and I was somehow able to win it twice. Then, I caught a 9-pounder in a Bassmaster Classic one year and also caught a $25,000 big bass in the first Heavy Hitters event on Lake Toho in 2020.

I can’t explain it because I rarely catch the biggest fish in a regular event. I’m not complaining, though – it feels great to be able to win these big bass prizes. But the big fish I caught at Heavy Hitters may top them all because of how it all went down and because I caught it on a frog.

A Tough Practice Led to a Big Bass

I struggled to get anything going during practice at Lake Palestine. When the event started, I only had one area that I felt comfortable with and that really was the only place I had. I started the first day there and lost two and caught one on a frog, but that gave me a clue to stick with it.

I started running new water. It was extremely windy, so I looked for anything that was calm and found a protected area with good water clarity and everything just looked right.

I was fishing the frog around shade and buckbrush when the big one hit. I had looked away right before the bite – I heard the explosion and looked back, and saw the fish sitting sideways right under the surface, all 8 pounds of her. I hesitated for just a second, squared up, and set the hook. I had this big fish on about 10 feet of line and somehow landed her.

Nine times out of 10, something goes wrong in that situation and you miss the hookset, or it gets away. I’m so thankful I landed that one and even more amazed after watching that video a few times.

The frog I was using is the original SPRO Bronzeye in the natural color, and I fished it on 50-pound Sunline Xplasma braided line spooled on a 7.3:1 Daiwa Tatula SV TWS reel. You can make those short skips with ease with that reel and also make a very long cast and reach anything you want. I like that reel speed because many of these shallow frog fish come streaking at you after you hook them and I feel that’s the right speed to catch up to them.

The rod I was using for the big one isn’t a rod made for fishing a frog, but it works very well in this situation. The Ish Monroe 7-4 heavy Tatula Elite Frog Rod is a beast of a rod for fishing open grass mats, and that’s what I use for those situations. In this scenario, I was skipping the frog around sparse cover and I like the 7-1 heavy Tatula Elite Skipping Rod designed for skipping jigs. I’m able to skip under brush and get way back in there better and because it has a soft tip, you can walk the frog really well, which was the key for me that week.

It was a memorable week at Heavy Hitters, and although I didn’t have the big-bass mojo quite like Alton Jones Jr. did that week, I’m very satisfied with catching an 8-5 and cashing a big check.

I’m in good shape to make it back to Heavy Hitters next year, and I’ll do everything I can through the final four events of the Bass Pro Tour regular season to fish this one-of-a-kind tournament again.