CODY MEYER: Why I Rely on a Topwater and Wacky Rig in Early Postspawn 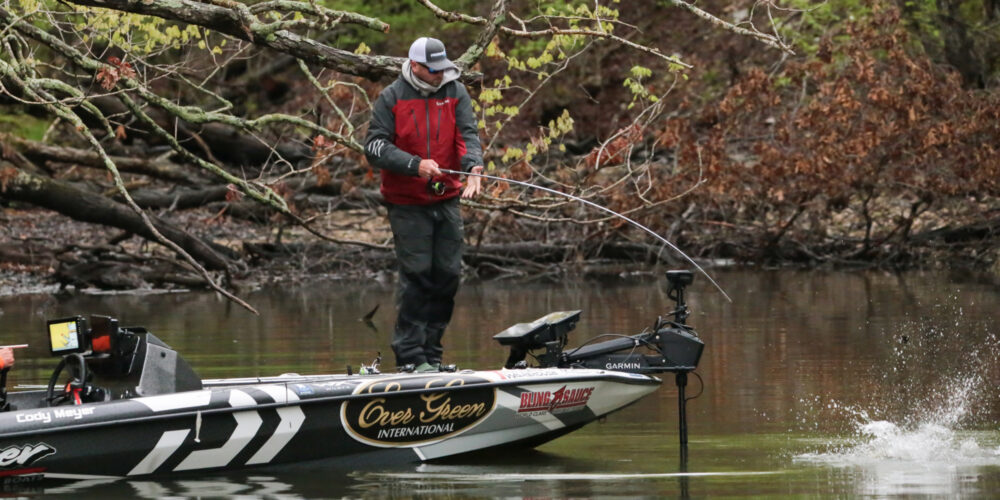 Cody Meyer will follow the same routes fish used in prespawn to stay with them as they move out in postspawn. Photo by Josh Gassmann. Angler: Cody Meyer.
June 2, 2022 • Cody Meyer • Angler Columns

The postspawn and early summer are some of my favorite times of year because the fish are hungry, and two of my favorite techniques come into play: a wacky rig and a topwater. Fish tend to be aggressive as they feed up after the spawn and you can catch them in a hurry with these two baits when you find them.

Anywhere you fish after the bass spawn, a topwater bait is a must. One of my favorites is a buzzbait because it’s fun to throw and because it’s a great bait for running down the bank and catching fry guarders that are still holding up shallow. Something about the noise and action gets those bass mad.

I also like to start looking for schools of fish, and one of the best ways to cover water quickly is with a walking topwater bait like the Evergreen Show Blows. It has a great walking action and commotion that calls fish from long distances. I use both the 105 and 125 sizes and stick with bone, chrome, and anything that looks like a shad.

For both the buzzbait and Shower Blows, I like Brent Ehrler’s 7-3 medium heavy “Multi-Purpose” Daiwa Tatula Elite rod with a 7.1:1 Daiwa Tatula SV 103 reel to get really long casts. I’m a fan of braided line for my topwater baits and like 50-pound Daiwa J-Braid Grand.

My most productive way to catch bass – and I use it just about everywhere in the country – is a wacky rig, and early summer is the best time to throw it. Whether it’s a Yamamoto Senko or the Daiwa Yamamoto Neko Fat Worm, when fish are up shallow, there’s nothing better at catching them than wacky-rigged plastics. I like to skip them under docks when the sun gets high (bass want that shade), but I also fish them around laydowns, rock, and anything that could hold a fish. The wacky rig really works everywhere.

I rig it on a No. 1 Owner Sniper Finesse Neko Hook and fish it on my 7-foot, 4-inch Daiwa Tatula Versatile spinning rod, a Daiwa Tatula LT spinning reel and use a combo of 10-pound Daiwa J-Braid Grand with a leader of 10-pound J-Fluoro Samurai.

After the bass finish spawning, I start to work backwards as I figure out where they’re headed next. I’ve found that bass can be pretty predictable this time of year – they’ll use many of the same areas they used in the prespawn, just following the same migration routes out to deeper water. They spawn close to the main channel or main lake, in pockets and coves. The first points outside of those areas are usually excellent places to start as the bass start to group up. That’s also where you find a lot of shad; bass know that and wait for their food to come by.

As much as we’ve heard about forward-facing sonar the past couple of years, it’s still a relatively new tool. I’ve had Garmin Panoptix LiveScope on my boat since it came out, but I’m figuring out more and more ways to use it every season.

The postspawn is a great time to get the most out of LiveScope, especially on lakes where bass get out in the trees and other cover after they spawn. A lot of times, you’ll catch one and the rest follow it away from the trees and it’s always been a guessing game to relocate them. But thanks to live sonar, it’s now much easier to find them again and keep catching them. That’s what I love most about this time of year – once you find the fish, you’ll be around a bunch of them.