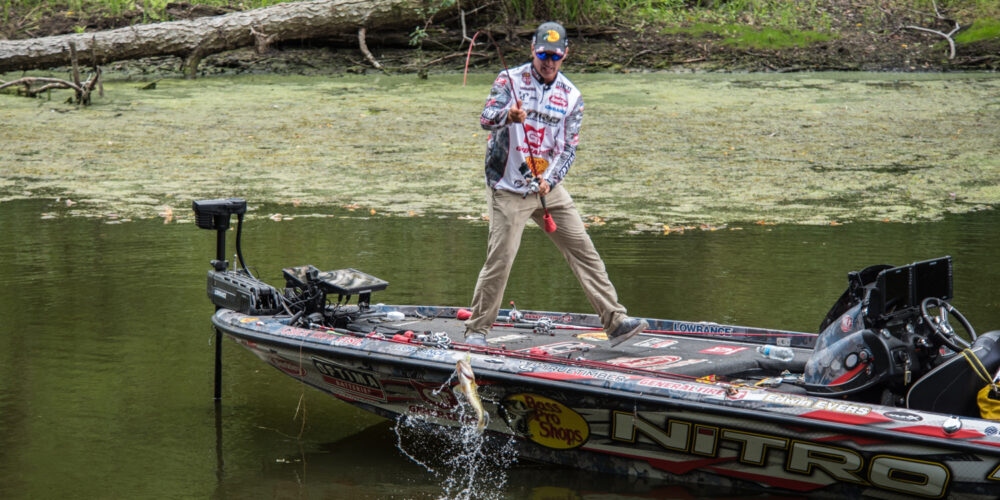 A big part of my job as a tournament bass angler is breaking down the options on a fishery and determining the best way to catch a lot of fish or the best way to catch several big fish. Because most of the national tournaments are on major reservoirs, that sort of fishing gets the most attention, but with the Mississippi River Super Tournament this week, this is a great time to talk about summertime river fishing.

One important thing I try to do before any tournament — really before any day of fishing — is to simplify my approach as much as possible. Rivers — and particularly big, shallow rivers like the Mississippi near LaCrosse, Wisconsin (host of the upcoming event), lend themselves to that.

I like to divide these rivers into three key area types: (1) the main river with its wing dams, inside and outside bends and sand bars; (2) the secondary tributaries off the main river, where you often find quite a bit of current and a hard substrate; and (3) the backwaters, where there’s really not any meaningful current, but there’s usually lots of cover.

In the heat of summer, all three of these areas are potentially in play, and I’ll definitely practice in all of them. In fact, it wouldn’t be unusual for me to spend at least a part of each competition day in all three area types. You can do that on a river because the main river is usually just a few minutes ride from the backwaters, and the secondary tributaries are in-between the other two.

But just because I might fish them all doesn’t mean they’re going to be equally productive. On any given day or at any tournament, you might find that the best numbers of fish are in areas (1) or (2), but that the biggest bass are in (3). In fact, that’s probably the most common scenario.

Let’s look at each area type a little closer.

(1) The main river channel usually has cover or structure in the form of rocks, wing dams, jetties, laydowns and sand bars. There are lots of baits that can produce here, but my go-to lure types are generally crankbaits, topwaters, Carolina rigs and football jigs.

(2) The secondary channels can have a lot of the same structure and cover, but they’ll also often have some vegetation. These areas are a little shallower than the main channel, and the presence of vegetation and shallow cover brings flipping and swim jigs into the mix.

(3) Backwaters are usually all about the shallow cover, and there are two approaches I like here: generating a reaction bite with square-billed crankbaits and hollow-bodied frogs or flipping the grass and wood.

The bass in the backwaters are typically the biggest available in the river system. They’re not out fighting current all day. They’re lazy, and because the backwaters don’t offer the same feeding triggers as main and secondary streams — things like current or barge traffic that stirs up the food chain — backwater fish can be tough to catch.

It’s why I’ll often rotate among the three area types. I might start in the backwaters in hopes of catching some quality fish, but I’ll also work the main river and secondary tributaries because they’ll generally produce numbers. Rotating through these areas also gives the fish a break from angling pressure and some spots may actually replenish through the day.

Two other tips have saved me more than once while fishing rivers.

First, if the wind starts to blow or some cloud cover develops, it’s time to abandon the main river and secondary tributaries in favor of the backwaters. Wind and cloud cover will often trigger a bite among those bigger, lethargic fish. Second, the heat of summer is the time of year I will actually try to “out-reel” a bass. Water temperatures and fish metabolisms are at their highest points of the year, and no matter how much you might try or the gear ratio of your reel, you cannot keep a bait away from a bass that wants it … but you just might trigger his predator instinct and get a strike that will make your day!