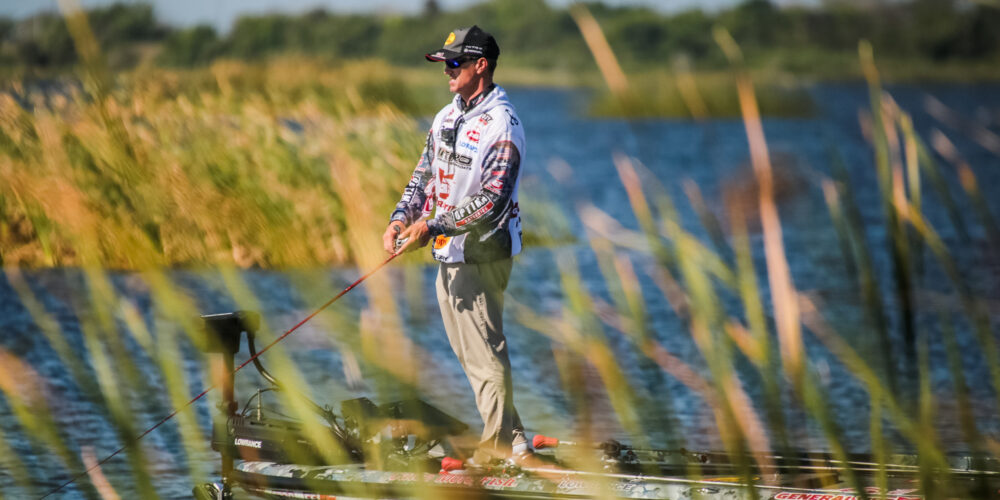 While Edwin Evers' winter offseason is usually jam-packed with traveling, this year is a bit different, involving the construction of a lake and an induction to the Missouri Hall of Fame. Photo by Phoenix Moore
January 27, 2021 • Edwin Evers • Angler Columns

I don’t have to tell you that the past 10 or 11 months have been strange. The world has been struck with a serious health pandemic, many have died, more have suffered physically and financially. In the scope of all that, my issues and comments are small, but I’ll share them here in hopes that they might offer a diversion from more serious things.

Like most of you, I’ve spent January at home. That’s unusual for me. January and February are when I’m ordinarily at my busiest — flying and driving around the country on behalf of my sponsors and getting to meet and talk with you.

I miss it, but it will wait, and we’ll have those times again soon, I hope. Meanwhile, being at home has had its advantages. I’ve been able to spend a lot of time with my family, and that’s been wonderful. I’ve also been able to tend to some things around the house and farm that would ordinarily have to wait for weeks or even months.

My family has been able to stay healthy — to weather whatever has come our way — and I’m extremely grateful for that. It’s something I don’t take for granted. Less than a year into the pandemic, I think almost all of us have felt loss. I pray it will come to an end soon.

On the bright side, I’ve found a project that’s been consuming me lately. Behind our home, on property that belonged to my wife’s grandparents, we’ve decided to build a lake. I hired an engineer to look it over and figure out just how large it could be. He determined that it could cover 31 acres with about three miles of shoreline. I couldn’t be more excited about it.

Of course, if left on my own, I would have mapped it out at over 100 acres, and there would be three feet of water in my living room, so it’s a good thing I hired a pro for that. The next step is getting all the permits from the county.

Once those are secured, I plan to sculpt the lake myself. I’m going to buy a bulldozer or excavator and a dump truck and do as much as possible on my own. I’ve always wanted to design my own fishery, and this might be the only chance I’ll ever have. With any luck, I hope to have it finished and starting to fill by summer.

We’re going to name the lake after my wife’s grandfather. His name was Walter Parker, but everyone called him “Chub” or “Chubby.”

And while it’s true that I plan to have a lot of fun fishing the lake, it’s also going to be important to my business and valuable to my sponsors. I want to be able to host meetings and media events there and to design and test tackle products. I might even make it available to research scientists studying bass and the other species that I’ll put in the lake.

I also want to involve you in this process somehow. As the project moves along, I plan to have contests to name various parts of the lake — points and coves and maybe even some offshore structure features. The winner could get some gear or maybe even a chance to fish the lake. I’ll figure all that out soon enough and keep you posted.

My Hall of Fame Invitation

Another thing I want to tell you about is that I’ll be inducted into the Missouri Sports Hall of Fame on January 31. It’s a tremendous honor for me … and quite a shock, too. When I started my career as a tournament bass angler, I never imagined that I’d be honored by a hall of fame of any kind, so this is really special to me.

If you’re wondering why an Oklahoma angler is being inducted into the Missouri Sports Hall of Fame, it’s a fair question. I was born in Missouri and lived there until I was about 12 years old. Since then, I’ve lived in Illinois, Texas and Oklahoma, but I’ve always had family in Missouri and felt a close connection to the state.

The athletes and sports figures who have been honored by the Missouri Sports Hall of Fame include Stan Musial, Satchel Paige and Bob Gibson (baseball), Len Dawson and Marcus Allen (football), and Bob Pettit (basketball).

And you won’t be surprised to learn that there are anglers in the hall, too, including Harold Ensley, Virgil Ward, Charlie Campbell, Stacey King, and, of course, Rick Clunn. I’ll be the eighth angler to be inducted … and quite possibly the proudest.