JOSH BERTRAND: My Step-By-Step Guide for Finding Smallmouth Up North 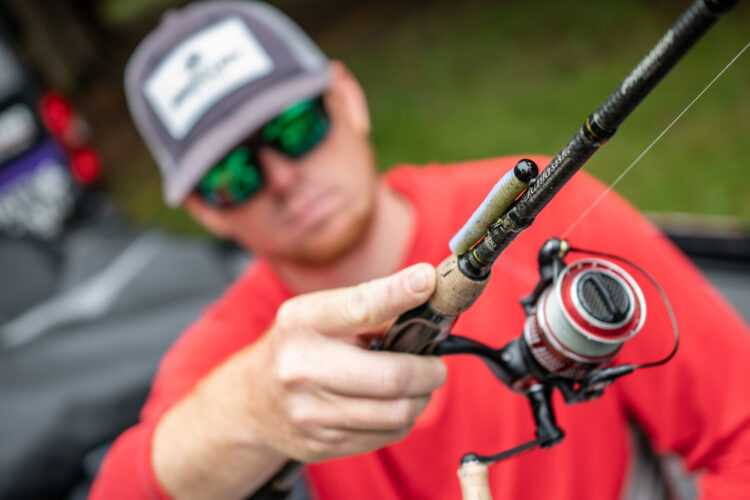 I love chasing smallmouth bass and especially love when we go on these northern swings during the tournament season to chase them. Just like largemouths, smallies are very seasonal fish and the seasonal pattern is what’s most important when trying to catch them. That’s why I go through a few steps when I get to a fishery during practice, to try and figure out how and where I’m going to find those bigger smallmouths.

I know, it seems really obvious, but it’s one of the most important steps. In the cooler months during prespawn and later in the postspawn, they’re going to be deeper, and in the warmer months, you can find them on protected flats spawning. This is obviously dependent on where you are in the country and the temperature around the body of water you’re fishing.

When it’s time for the spawn, those fish are going to be committed to those spawning flats. Once the spawn is over, those smallmouth are going to live where the bait is, and that’s out deeper.

Step 2: Figuring Out the Forage

Next, I try to find out what the smallmouth are feeding on most. For example, the fish that live near the Great Lakes and feed on goby are really going to be hanging out near the bottom of whatever body of water they live in, because that’s where the goby hang out.

If the fish feed more on perch or something like that, I expect those smallmouth to be more of a roaming fish, higher in the water column as opposed to on the bottom because their prey isn’t on the bottom. This is the case for a Lake Champlain, where we’re heading next.

To me, smallmouth fishing is great because there are fewer baits that you need compared to largemouth. The reason is that you don’t often have the vast changes in water clarity in fisheries that are dominated by smallmouth. You may fish for largemouth in 2 inches of visibility to 20 feet. That’s not the case for most smallmouth fisheries.

When I’m fishing a body of water that the main forage is gobies or crawfish, I like to go with a drop-shot or a Ned rig. I need something that’s going to be able to get my bait to the bottom of the lake where those smallmouth are feeding.

If I’m fishing for smallmouth that are higher in the water column chasing more mobile bait, I like to go with a swimbait (I prefer a Berkley Power Swimmer) or a jerkbait (my favorite is the Berkley Stunna).

Usually, searching for smallmouth is all about being able to work with the technology you have to locate them. Some people may be thinking, “There didn’t really seem to be a lot of technology used on the St. Lawrence River during Stage Five with all of those floggers.” That’s a correct statement, but that’s because we were on the St. Lawrence River the one time of year where you’re not going to need your sonars because of how shallow the fish are, and how clear the water is.

When the smallmouth get deeper than 10 feet, that’s when the technology really comes into play. Luckily, the fish are deeper than 10 feet for the large majority of the year, that’s why I think we’re going to see more guys scanning and using their electronics come Stage Six on Lake Champlain and Stage Seven on the Detroit River.

Step 5: Look Out for Rocks

Rocks are magnets to smallmouths. There’s no doubt about it. While scanning the bottom, I’m looking for any irregularities because those are the places that are going to hold fish. Especially when fishing on the Great Lakes, those rock reefs can hold so many fish. If I find a stretch of a reef with some big boulders on it and it’s a mile long, I might only be able to fish 100 yards worth of it because there are so many fish living there.

Not only do you have to be on the lookout for structure—like a hump, point, reef or flat—you need to find the cover within the structure like the bigger boulders and rocks. That’s how you find the fish and catch a bunch of them in a short amount of time.