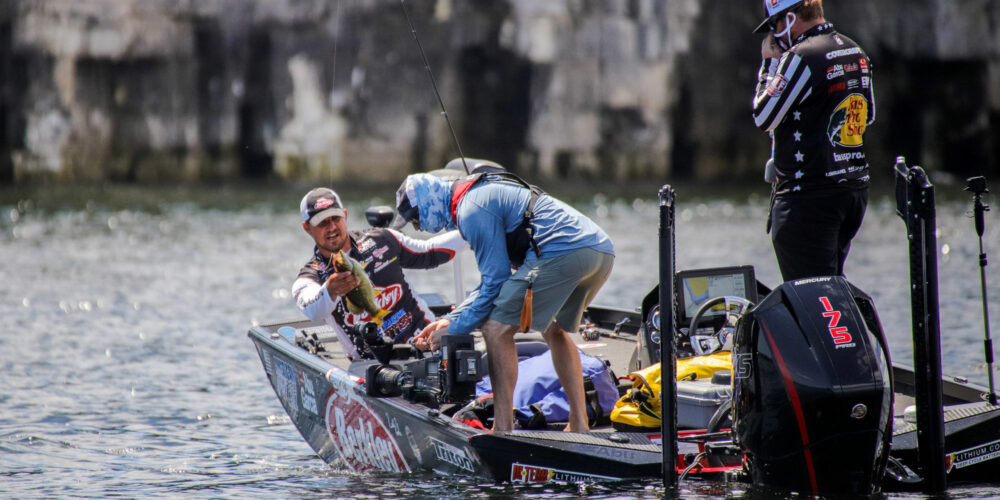 I’m no smallmouth bass fishing expert. My last two tournaments of the year, the MLF Bass Pro Tour and the FLW Super Tournament were smallmouth fisheries, and I did well. Heck, I’ve even won an MLF Select event on a smallmouth fishery, though I did win it fishing for largemouth. One thing I’ve learned over the years competing against the best bass anglers in the world, I’m not going to be on them every time.

But when I am, I sure will try to take advantage of them as much as possible. But even after two good finishes fishing smallmouth bass tournaments, and years of fishing for them, I’m still not comfortable. I don’t know that I’ll ever be comfortable fishing for smallies. Flipping and throwing a frog in the shallows for largemouth is my comfort zone.

Now, over the years I’ve learned a few techniques to allow me to be competitive. I’ve read about how to catch them, even watched YouTube videos. I’ve also learned that if you don’t see the smallies on your Livescope or other electronics, you’re likely not going to catch them.

Finding the Right Kind of Cover

I can’t say 100 percent where the smallies are going to be, but there are just some types of cover you have to fish, especially in the Great Lakes. I look for an area where I know I could potentially fish all four days of a tournament. One thing that helped me on Erie (also on Sturgeon) was making a good educated guess and using what I could to find an area I thought smallmouth would be. Then find those points, hard bottom, boulders, a sand edge, maybe some grass as well.

The area on Sturgeon Bay where I did my damage on Day 1, I didn’t start there. In practice, I’d only caught one or two scorables. When I got to that point, I had maybe one or two scored. When I shut down and put Livescope on, they were all there. It was amazing. I was leading my group going into the second day.

My second day on Sturgeon, the wind changed and they were absolutely gone. I was lost and done. My first day I weighed over 100 pounds, but that second day, I had to go to other stuff. I pulled up on a point with some grass on it. I’d seen this everywhere: chunk rock, sharp line to sand, then scattered grass.

The smallies work the sand edge. I really learned about that there. I really wanted the automatic qualifying to the Championship Round and it was close, but because they disappeared on me earlier, I thought I was done. Fortunately, I got back on them.

It got so intense, I got down to third place, I wanted to win the group so badly, but fish weren’t coming. I was just behind Cliff Pace. There was such a back and forth. I’ve never had so many highs and lows, I think I lost a few years of my life with that stress.

In Sandusky, I think I had the winning spot, but I ended up sharing it with other anglers. If only one of us had been on it, I believe that angler would’ve won.

I need to learn about being in control. I’ve always been a good athlete. I have the drive, but still need to be willing to make adjustments. It’s not always going to go my way. I’ve got to fish on the fly and keep an open mind. I need to realize I’m not in total control.

In tournaments, I’m dealing with a living animal that has its environment and instincts. Still, I tend to always doubt myself. It’s tough to get over that.

I’m not sure I’ll ever be comfortable fishing for smallies, especially on the Great Lakes, but one thing I do know for sure about them, and I don’t mean to sound like a commercial, but the Berkley Flat Worm with that MaxScent works. Seems like if you get it in front of them they’ll bite it.

I’ve got the baits and the right techniques. My challenge is finding them.