KELLY JORDON: Why I believe in the Power of the Big Squarebill 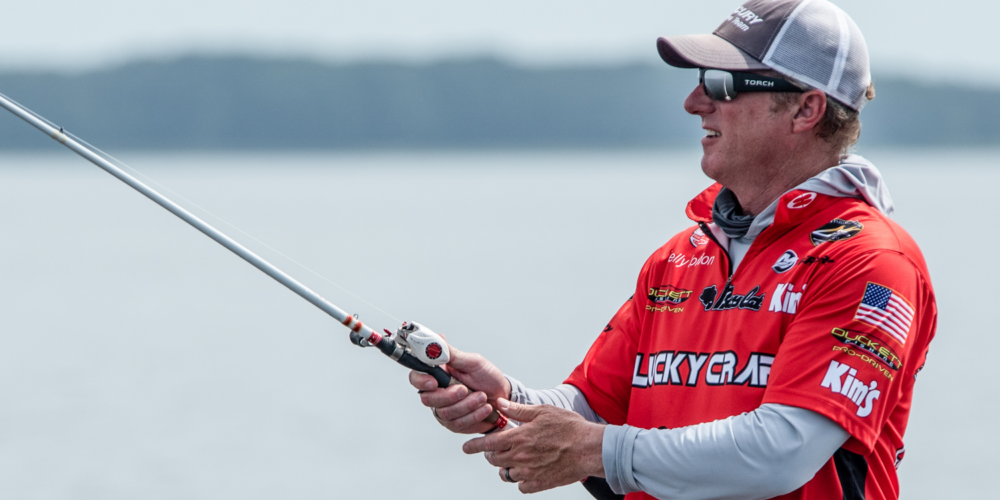 The squarebill crankbait is one of the most popular lures of all time, and all bass anglers know how well they catch fish in shallow water. They’re great for banging into cover like laydowns, rocks, and everything along the shoreline.

Every lure company makes a version of the 1.5 squarebill that was made famous by Lucky Craft years ago with the LC 1.5. Squarebills this size still catch fish, but bigger squarebills are something that many people overlook. I’m talking about the massive baits 3 inches and larger that weigh more than an ounce, like the LC 5.5.

There are times when a big bait like this can be the way to get the attention of the biggest bass in the lake. I’ve seen it happen many times and my revelation came during a Toyota Texas Bass Classic (TTBC) on Lake Fork several years ago.

Discovering the Power of the Big Squarebill

Back during the days of the TTBC, I was practicing and had a few good patterns figured out – a shad spawn deal and some flipping stuff. I had just gotten the new baits and since I already had a pretty solid game plan, I decided to fish the LC 5.5 and see what happened while also learning a new bait.

Lake Fork is a lake I know very well from my days guiding there, and I was in one of my favorite creeks and running a tree line in 7 or 8 feet of water when I hooked a 7-pounder on the 5.5. I’d never really caught anything there, so I made another cast to see if it was a fluke and caught one over 8 pounds. I put the bait down and started side imaging and found a shell bed right on the edge of the trees on the corner of a creek channel and it was stacked with bass. I said, “Oh, my gosh!” and left to save that area for the tournament.

The next day, I started there and there were a bunch of locals fishing around there. I milled around, waiting for them to leave and casually flipped some trees. I wasn’t in a hurry because the late bite is usually the best in deeper water on Fork, and I didn’t want to start slamming them and get attention from other anglers.

They finally left, and I had my chance. I looked around and knew it was safe, and I could start fishing. On my first five casts with the LC 5.5, I had 28 or 29 pounds and was happy with that for the first day, so I was done. That was a five-fish limit, and I still think about what I could have caught in the Major League Fishing format.

Unfortunately, the next day had major storms and it rained 5 inches overnight. They had to cancel the expo and concerts because everything flooded. My spot got blown out and turned into mud. However, that experience gave me sky-high confidence in fishing big squarebills, and I still use that bait today when the time is right.

Situations for the Big Bait

All of the bigger squarebills on the market – whether it’s a 3.5, 4.5, or 5.5 – are great to show the fish something different, but the 5.5 is my favorite. When fish are on that bite, it’s something else and so much fun.

Bass are used to seeing small baits, and big fish want something bigger to eat. The biggest bass are the ones that eat large bluegill, crappie, and gizzard shad and that’s why you see so many giants caught on big glide baits and swimbaits. Everyone says it, but big baits mean big fish; whether it’s postspawn, summer, or fall, baits like this will catch the biggest bass that lives there.

The other plus of a bait this big is that they dive much deeper and you can reach that 10-foot range on a long cast. That opens up much more of the lake than just the stuff you can see along the bank. You still get that great squarebill deflecting action that triggers strikes, just deeper. Rock piles, points, humps, outside grass lines, trees and brushpiles are prime places to use them. If you can tick the top of a brush pile and get that deflection, you’ll get some vicious strikes because they’ve never seen something like that.

Since these baits are so big and heavy, I fish them on a Duckett Rods flipping stick and the 7-foot, 6-inch medium-heavy is the smallest I’ll go. I choose a reel between 6.3:1 and 7.1:1 and typically use 20 or 25-pound fluorocarbon. Seventeen-pound is the lightest I’ll use (15-pound is just too light).

My experience is that you want to crank these big baits much faster than usual – you’ll catch fish best when you burn that sucker. When one wants it, they’ll smoke that thing. It’s such a fun bite, but it’s a way of fishing where the fish are either on it or not, and you’ll know when it’s on. Don’t be afraid of trying the big squarebill; you might catch the biggest bass of your life with one.