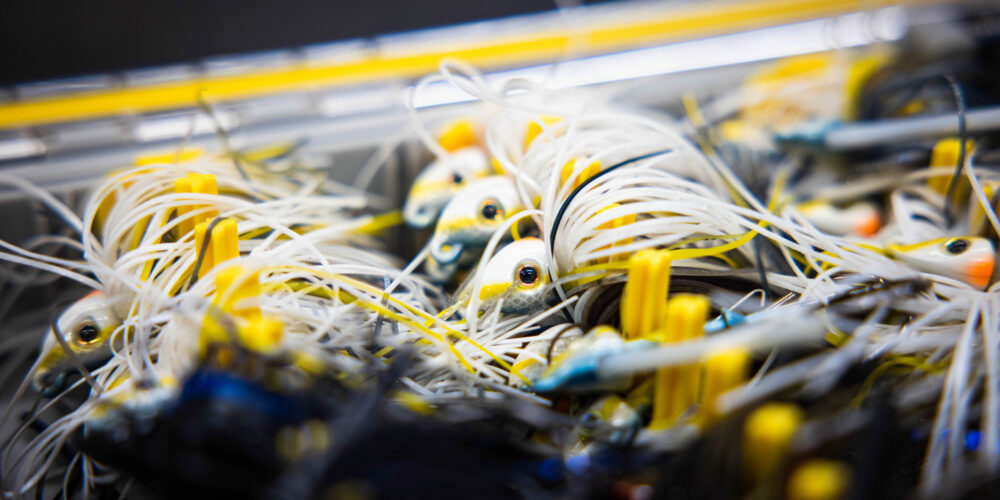 Here’s a crazy fact that might freak you out in terms of how far tournament bass fishing has come in 30 years: When I first started fishing professionally, I carried all of my terminal tackle – basically hooks and weights – in a single flat Plano 3700 box. In addition, I carried every jig I owned in another flat 3700 box.

That’s right, all my terminal tackle and all my jigs in just two flat boxes. Boy, those were simpler times!

Back then, all we had were lead bullet weights, worm hooks, extra treble hooks and maybe a few swivels and beads for Carolina rigs in the terminal box. The jig box was basically 3/8- and 1/2-ounce flipping jigs and casting jigs.

Now keep in mind, this was in the late 80s, before the influx of drop-shots, tungsten punching weights, wacky rigs, Neko rigs, Ned rigs, swimbaits, football jigs, swimjigs, vibrating jigs and yes, even before the rise of the shaky head! The cutting edge soft plastic back then was a Sluggo.

My how things have changed.

Terminal Tackle and Jigs Are My Nemesis

As all these techniques and lures poured into bass fishing, I kept trying to cram all these new additions into my same two boxes. Then it grew to three boxes and four boxes. I’d start each year with neat, organized boxes and by midseason, they looked like terminal tackle coleslaw. Weights mixed with worm hooks mixed with tube heads mixed with treble hooks.

My jig box would get in such disarray I couldn’t even find a standard ½-ounce black and blue flipping jig because they were buried in a sea of rubber skirts! I’m sure some of you can feel my pain.

Over the last 15 years, I’ve gotten most of my tackle management under control. However, organizational nirvana of my terminal tackle box and jig box has always eluded me.

Last winter, I finally sat down and dedicated myself to creating a better system for these two problem areas.

I used my new systems this past season and they worked well, but still needed some improvement. This winter, I sat down again and tweaked some things until I finally got them perfect. Now that all is finally right, I want to share it with anyone out there who struggles with keeping jigs and all those hundreds of pieces of terminal tackle organized.

The perfect organized system built for efficiency started with Plano EDGE boxes. With the EDGE Series, Plano set out to manufacture tackle-specific boxes for every kind of lure we use in fishing. Just like rod companies make rods designed for a specific technique, Plano has lure-specific boxes that have brought the chaos of lure organization under control.

I want to talk jigs first because jig order has made me crazy for years. I used to get so frustrated rummaging around through 50 jigs all hodge-podged together in one box to find the exact size and color I needed.

These days, I can literally point directly to any jig size and color before I even pull it out of the box thanks to Plano EDGE Jig boxes. These are 3700-size boxes that have custom-molded posts that form slots that lock the neck of a jig into place. This keeps the jigs tightly secured so you can see the head size and skirt color at all times. It also keeps the weed guard upright so it won’t get warped or mangled.

With the DuraView top, I can visually scan a whole jig selection and pick one out before I even open the box. The jig box will hold 70 jigs in a single layer. But the cool thing is you can stack two or three jigs into each slot. I have double and tripled the slots in my vibrating jig box to nearly 170 Thunder Crickets.

I now divide my jigs up into four categories and dedicate a whole EDGE Jig box to each category. The first two are pretty self-explanatory: vibrating jigs and swimjigs. They each have their own boxes. The way the EDGE Jig box holds vibrating jigs in place so you can easily see the head size, blade color and skirt color is super efficient.

After that, I have a third jig box that secures my casting jigs, football jigs and finesse ballhead jigs. Lastly, I have a fourth box for all pitching and flipping jigs, from the Hack Attack 1 1/4-ounce heavy cover jigs to Strike King’s 3/8-ounce finesse pitching jig.

Next is my terminal tackle organization, which has been the most tedious of this process. In order to keep the hundreds of different weights, hooks, heads, O-rings, swivels, beads, split rings and anything else smaller than a penny organized, I had to go to a total of five Plano EDGE Terminal tackle boxes.

The best thing about the Terminal boxes is that they come with smaller retainer boxes inside that hold hooks and weights so your weights aren’t bouncing around like wrecking balls in your box, beating everything to pieces. These smaller retainer boxes can also be purchased separately so you can buy as many of a certain size hook or weight retainer box as you want to customize your boxes.

Next up is a Terminal 3700 box that holds nothing but hooks, from offset hooks to wide gap hooks to straight shank hooks to replacement trebles. All hooks, except for any finesse/wacky hooks, which are in the finesse box.

Terminal box number three is a smaller 3600 size, which is for all my weights. Tungsten in sizes from 1 1/2-ounce punching weights to 1/16-ounce worm weights. I also have some lead weights, like clamp-on split shot, for very niche situations.

Terminal box number four is a 3500 size, which is nothing but Carolina rig weights, swivels and beads. I carry C-rig weights in a different box because combining tungsten punching weights and C-rig weights in one creates a box that is really too heavy to be portable. Plus, I just don’t use a Carolina rig that much so I wanted it to be a separate box.

My final Terminal box is just a catchall for a lot of different niche rigs that are a necessity to carry. Things like Mustad’s big 6/0 belly-weighted swimbait hooks in both the Power-Lock plus design and the Grip-Pin design for big 6- and 7-inch swimbaits. I also carry a variety of larger swimbait heads, including underspin-style heads. I don’t use this stuff very often, but they are must-haves on places like Guntersville, Fork and Toledo Bend.

If jigs and terminal tackle are still giving you organizational fits like they used to do me, Plano EDGE Series Jig and Terminal tackle boxes can cure what ails you!