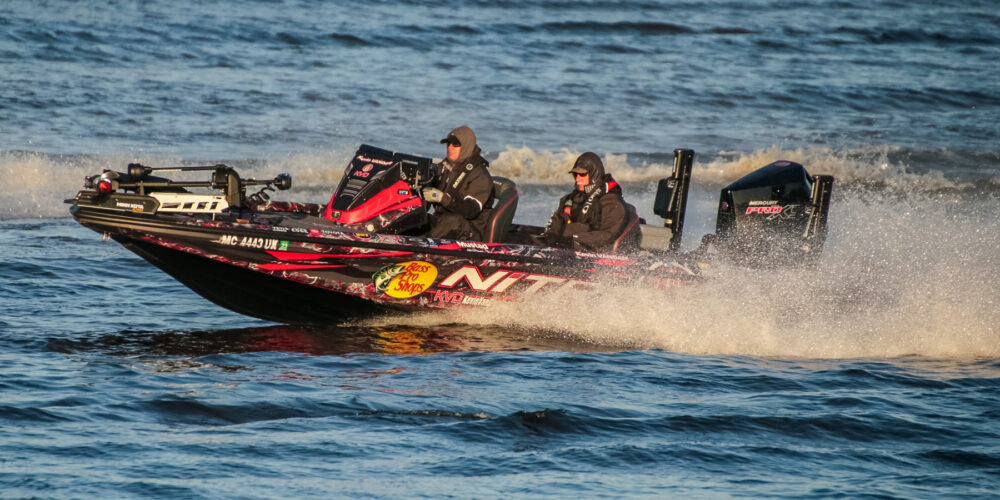 Ever-changing conditions on Okeechobee had me doing this a lot: Scrambling to figure out Plan B. Photo by Phoenix Moore
March 2, 2020 • Kevin VanDam • Angler Columns

At Eufaula, we encountered water levels that rose over 2 feet and then dropped 2 feet, all in a span of 30 hours. I experienced a similar phenomenon at Okeechobee last week, except this time the rise and fall in water was created by a huge wind tide.

My start at Okeechobee was reminiscent of my start at Eufaula: I zeroed in the first period and spent the rest of the event righting the ship in yoyoing water conditions.

South End of Okeechobee Was Plan A

The best part of my week at Stage Two was that I had an incredible practice on the south end of Okeechobee. The number of giant bass that slurped my swim jig off the surface like a topwater was mindboggling. I knew we had a big cold front coming, but according to the weather app I looked at, it said the north wind would not build until the afternoon of day one.

I was in Group A, so I would be fishing day one and day three. My basic strategy was to go south early on day one. After my practice, all I wanted was just one hour of swim jig magic down south to get my event off to a big start. Then I figured the winds would moderate on my off day and I could return to the south end of the lake on day three to wreck them again.

As usual, planning anything in such volatile conditions in the early spring is a waste.

Due to the predicted high winds in the afternoon, we were allowed to trailer our boats to wherever we wanted to put in on day one. I chose to trailer to the south end. I figured I would have a short run to my spot, hit the last of the pre-frontal window and crush them before the winds got up.

Well, I was just a couple of hours too late. Literally the minute we went lines in, we got hit with a 35 mph wall of north wind. What caught me off guard was how fast the water started rushing into my area. It pushed in there like a ripping tide. I watched in disbelief as cold, muddy, main-lake water took over the entire bay I was fishing in a matter of minutes.

Working Through Plan B

So much for Plan A! It was already out of play before my 10th cast.

I knew I had to bail on that program immediately, so I headed for the Rim Canal and ran towards Clewiston. I tried to run an old pig trail back out into the lake and basically buried my boat on the bottom.

Now I had gotten myself into a real jam: my primary area was ruined, I had no scorable bass, I was stuck in the mud and the clock was ticking. I had to use my outboard to grind my way out, goosing the throttle and only moving several feet at a time. This went on for 45 minutes. I was worried I was going to blow up my motor, but that Mercury Pro XS dug me out of the muck like a Ditch Witch.

By this point I had lost the entire first period to high winds and being stuck. Once I was free to run, I ducked into a small zone of clear water near Clewiston. The water was high there, too, but at least it was still clear. The area was trapped behind some thick hay fields, which helped protect it from muddy lake water. I had to make this area work because I had no other options.

I committed myself to this area for the next two periods. I knew if I didn’t hunker down, get my head right and focus on what’s in front of me for the next five hours, I could be facing a zero by day’s end. It was like a carbon copy of my first day at Eufaula!

Once I settled into the area, I began catching fish on 1/4- and 3/8-ounce Strike King Heavy Cover Swim Jigs matched with Strike King Rage Craws. My best colors were black and blue and Sexy Shad. Over the next five hours, I boated four fish for 12-2, which put me in 10th for the day.

I was pretty dang proud of that 10th place spot, too! Sometimes tournament fishing comes down to working yourself out of a bad jam. Given the way my day started, I was thrilled with a 10th place start to salvage the event.

More Adjustments on the Fly

On my second day of competition, the wind had shifted to the east. I wanted to head south again, but before I did, I thought it would be wise to spend the first period up north looking for some fishable water in case my place near Clewiston had been torched by the wind, too. While exploring water up north, I caught a 4-9 on a 4.75 Rage Swimmer rigged on a Mustad Belly-Weighted Hook.

After the first period ended, I headed back down to Clewiston. To my surprise, the water was still clear. My optimism rose again, hoping some new fish might have moved in with the high water. But after several hours, I caught just one more scorable bass. With just two scorable bass on the day, I fell to 18th but still made the Knockout Round.

The Knockout Round was four whole days after the cold front. Given that, I began to convince myself that four days was enough time for South Bay to moderate, clear up and come back into play. So when my boat number was called on Knockout Round morning, I pointed the nose of the Z21 south and made the big run again.

I made a quick stop at the hayfield in Clewiston to check the watercolor and I quickly caught a 4-pounder. Then, for some odd reason, I suddenly decided to go around to South Bay to check the watercolor there … and it was still trashed. More time wasted in the first period! When I returned to Clewiston, it continued to burn up my clock with no scorable bass.

Finally, with one period left in the week, I made the decision I should have made the very first day: I went to the north shore near Indian Prairie Canal settled down and just fished. In the last 2 hours, I went on a nice four-fish run for 12 pounds, which pushed me to 14th place for the week and ninth in the points – I’ll take it!

Similar to Eufaula, I got off to a bad start and spent the week fishing from behind just trying to catch up and stay in the cuts. The idea in this format is to get off to a good start, get a little breathing room and then practice to stay ahead of the conditions. But in order to do that, your first move has to be the right move.

So far that hasn’t happened to me this year, but I’m sure looking forward to when it does!