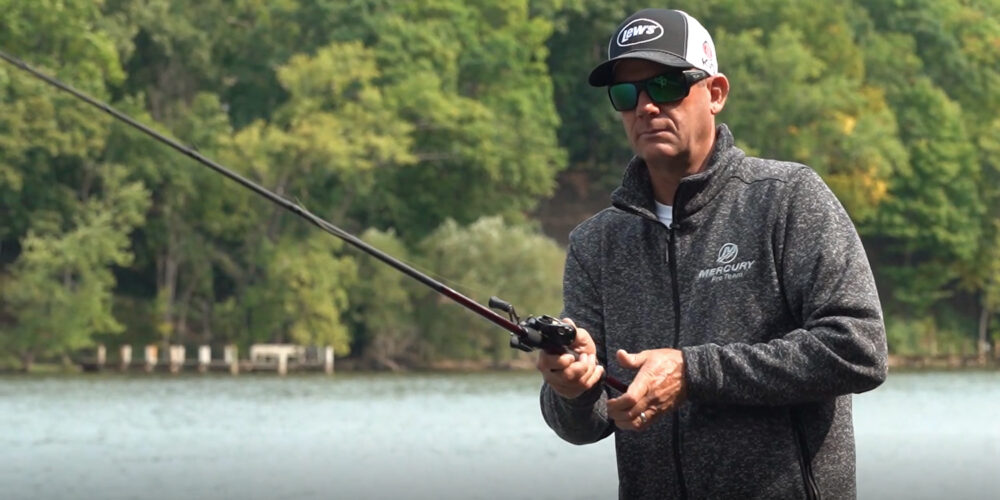 Learning to skip cast accurately is one skill that will benefit all anglers. Photo by Christopher Shangle.
September 8, 2021 • Kevin VanDam • Angler Columns

If you want to become a better tournament bass angler, one of the skills you must learn is the ability to skip lures on low-trajectory casts into very tight spaces while landing the bait softly and quietly.

With fishing pressure at an all-time high and more nooks and crannies being built on lakes by the day, getting lures into places that other recreational anglers can’t is a critical skill needed to gain an advantage.

Traditionally, spinning gear is the first choice when making skip casts with lighter lures, but the type of skip casting I’m talking about here is making low, stealthy shots with casting gear. Spinning gear skips great, but is limited on rod power and line strength. When you’re looking to fish bigger baits and quickly pull bass away from heavy cover like docks, catwalks, cables, bushes, overhanging trees and from under pontoons, it’s better to go with the heavier artillery of casting tackle.

Skip casting requires firing a lure low across the water’s surface; the basic mechanics are to start with a side arm cast low to the water that turns into a tight, quick roll cast. The roll builds momentum in the lure and imparts energy in the rod tip to sort of “spring load” the lure and release it parallel to the water.

When done correctly, the lure will travel 70 or 80 percent of the cast just above the water and optimally skip two or three times across the water before making a quiet, natural landing in the final target. Ideally, you want the distance of a regular cast so you can stay back off the cover, but the quiet, splashless landing of a pitch or flip.

When skipping back into tight places, the first cast is critical. Skip cast presentations are all about using stealth to provoke a reaction bite. The fish are set up in the shadows of tight cover and you want the lure to silently appear right in the strike zone causing that bass to react on it. If you goof up the cast and stuff the lure in the water or smack the cover with it, it spooks the fish and your one shot is over.

That’s the neat challenge of skip casting: it’s a deadly combination of stealth and accuracy. When you get it right – making the lure slide into the cover perfectly – you’re rewarded with a reaction bite that few others could produce.

Another key thing about skip casting is that most of the initial presentation is the presentation, meaning you make an entire cast just to work the first 1 to 5 feet of the cast in the cover. The other 80 percent of the cast is over dead water; so having a high-speed reel is must.

The Right Tools for Skip Casting

Backlashes are the bane of skip casting with baitcasters. If you’ve ever tried to skip with casting gear under docks, you know what I mean. Smack a lure into a piling, dock brace or stuff it in the water too hard and it blows up your reel into a snarly mess, leaving you to pick out coiled line while the clock is ticking. Doing this multiple times a day leads to building frustration and eventually a meltdown.

If this sounds familiar, I have some great news: Lew’s has just released the Pro SP, a reel specifically designed to greatly reduce backlashes, making skip casting far easier than it’s ever been before. The Pro SP was created with the help of Andy Montgomery, who’s considered one of the best skip casters in tournament bass fishing. Andy and I both work together on the Pro SP project to address causes of backlashes with Lew’s engineers and they went to work building in safeguards on the Pro SP reel to prevent those nasty overruns from occurring.

For starters, the Pro SP has a very shallow spool that only holds about 40 yards of 20-pound-test-diameter line. Such a limited amount of line helps reduce the occurrence of backlashes and greatly reduces the size of the backlash. Also, the engineers designed an ingenious braking system that slows the spool revolutions towards the end of the cast to reduce backlash and create the perfect tension on the line to help feather the lure across the water when it is needed most. With such little line, Lew’s also created a “Knot Slot” in the spool that hides the line-to-spool knot under the spool so it won’t create an uneven bump under the line for much smoother thumbing of the spool.

The Pro SP also features an 8.3:1 ratio reel, which helps get the lure through the long dead zones faster to make more of the right presentations in a day.

In addition, Andy also worked with Lew’s to design his own signature series rods for skip casting. These rods have the perfect tip actions for the right amount of  “coil” when loading the rod with a sidearm cast, as well as the right amount of backbone to pull big bass from the cover. Andy had his skipping rods built in two sizes to accommodate different anglers’ stature. The TLS-69H is 6-foot-9 in length and the TLS-71H is 7-foot-1.

I also worked with Lew’s in designing a couple of signature series rods that pair very well with the Pro SP reel for skipping and low trajectory target fishing. The KVD-GC-4 is a 7-foot, all-purpose reaction bite rod with a fast action made for zinging spinnerbaits and swim jigs in close quarters around tight cover like bushes, docks, clustered laydowns or thick standing timber. The other is the KVD-GC-5 which is 7-foot-2 and a little beefier for skipping frogs and bigger swim jigs into any kind of cover you want to put them. This rod has a little more power for better hook penetration on frogs and getting the fish out of cover quickly.

My jigs are all stored in Plano EDGE Jig/Bladed Jig Utility Boxes, which have solved the challenge of organizing and storing jigs.

Next time, we’ll talk line, lures and few tricks of the trade when it comes to skipping like a pro.