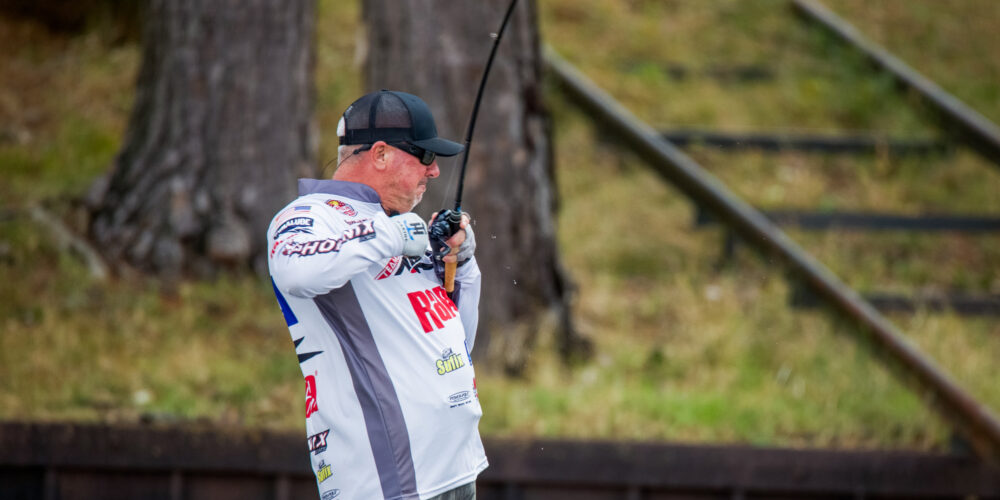 The "Honey Badger" is ready to reclaim the momentum he built during the first three Stages of the Bass Pro Tour. Photo by Jesse Schultz
May 23, 2020 • Randall Tharp • Angler Columns

Momentum is huge on the MLF Bass Pro Tour, just like any other professional sport. I had some really good momentum building through the first three Stages of the 2020 season, and so did the Bass Pro Tour as a whole: three big-fish destinations, with a lot of big bass being caught.

Then, it all stopped.

When we were fishing in Texas at Lake Fork – when all of the virus stuff was starting to go down – I didn’t know what was going on. I missed the cut at that event, and on my drive home to Florida, I heard that the country was shutting down. That was a shock.

When I’m fishing a tournament, I’m not watching the news. None of us fishing the tour really watch the news or talk much about anything other than fishing. It’s like we exist in a bubble.

Here we are a couple months later, and I’m still concerned about our fishing rights, professional tournaments, the leagues, all of us involved in the sport. I’m very fortunate that there aren’t any major issues with the virus close to where I live here in Florida, but everything just feels weird. I don’t know if we’ll ever get back to “normal.”

My Thoughts on Moving Forward

On the positive side, I’ve been fishing a good bit while we’ve waited out the virus. I’ve been fishing probably six to eight hours a day. I’m very fortunate to live right off the Gulf of Mexico, and frankly, there’s not enough time in my life to figure out everything that’s going on in the saltwater around here.

I really love living in this part of Florida. I’ve lived here for seven years, and I’ve never been home this much in April. I’m having a good time out here. Seeing the ocean come alive each day is sweet!

But as much as I love all the saltwater fishing, I really want to get back to fishing the Bass Pro Tour. When it’s possible to start competing again, I think people will really want to watch. The MLF NOW! shows were so good, and the excitement was building.

Like I said earlier, my momentum was there before we had to pause the season. I put myself in the position to win at Okeechobee and Eufaula. The only one I wasn’t in position for was Lake Fork, and I caught a 9-pound 15-ounce fish there! One more good one, and I would’ve made the cut.

Unlike many Americans, I haven’t missed a paycheck yet, and I’m very thankful. I can only imagine what others are going through in these tough times.

If things go according to plan, I may get to fish seven events by the end of the year. It’ll be the least I’ve ever fished in a tournament season, however, I’m so excited to be able to do these events. I’m ready for everything to get back up and running. I want to get out there and start fishing again, because I really miss the competition.

One thing I’m wondering about is the Heavy Hitters event. It won’t be how it was originally set up this year with 30 guys due to us having to move events around. But it’s still a big-money event, and I really like the concept and fishing for big fish.

Still, I’ll believe we are doing this again in 2020 when we finally tee up.