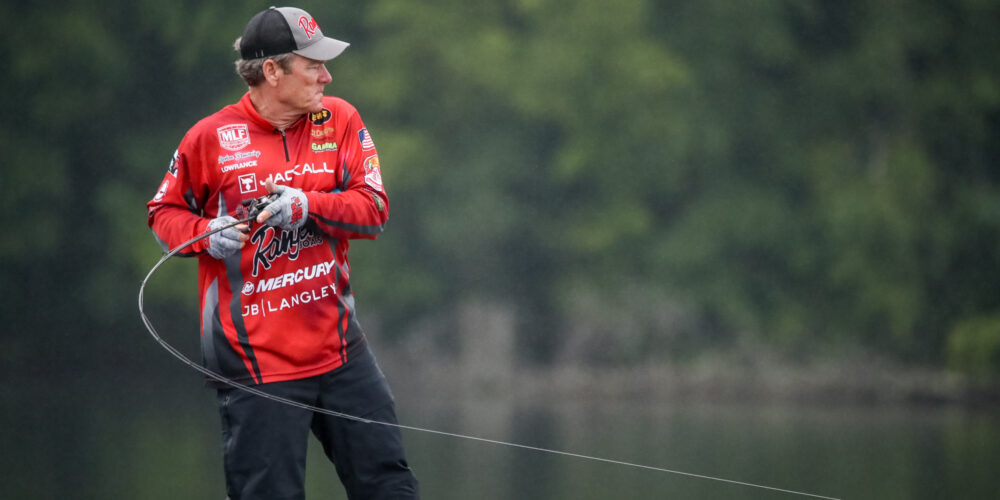 I’m taking a little time to relax until Stage Six on Lake Champlain. I live on Lake Hamilton in Arkansas and, well, I’ve become “one of those guys.” I own a jet ski and a wakeboard. Yes, that’s right, the most hated products to bass anglers.

Seriously though, it’s a lot of fun and it’s relaxing to spend time with my family on the lake. Even with the downtime from the Tour, I’m focusing on maintaining the currently productive season I’m having, and meeting my goal of making at least every Knockout Round this year.

So far, the year has been good, and making all the Knockout Rounds would be a darn good accomplishment – would put a nice feather in my cap. But having such a consistent and productive year didn’t come by accident.

How I Define Success

I think the biggest part of having success on the Bass Pro Tour was understanding and getting comfortable with the format. I’ve been able to gauge lakes pretty well. To keep numbers in mind, figuring out what weight it would take to do well, all that. I’ve been pretty good at analyzing what it would take for every event, and really adjusting and honing what I do.

For the event on the St Lawrence, I had 120 pounds in my mind to make the initial cut. My guess wasn’t due to great practice, it just comes from going to the venues enough to know the potential was there. Then I want to make sure I fish those venues to my fullest potential. That’s the only way I’m satisfied with a tournament outcome.

I don’t overanalyze stuff. I keep it extremely simple and keep it comfortable. I know how I like to fish and catch fish, so I go out and try to figure out a bite where I’m comfortable. Looking at my tournament history, I’ve been very consistent over the years, making lots of top 10s, 20s, and 50s with a win here and there, but I make dang sure people don’t forget who I am. I don’t want to be that guy that people remember as being “good years ago.”

Make the Most of Opportunities

I’ve been around long enough to know there are only a few tournaments per year that any angler has the opportunity to win – where the event is in his wheelhouse, so to speak. When they come around for me, I might gamble just a little more. But events I feel like I might not have a stellar outcome, I make darn sure I get into the Knockout Round.

I take baby steps and hopefully get in, and take it forward from there. I did that at Chickamauga – I learned just enough and then figured out something in the areas I fished.

Most of the good finishes over my career have been catching shallow largemouth. I always believe there are shallow fish year-round. If you can go in there and figure them out, you don’t have to share those fish when the rest of the field is looking for a deep bite. Searching for shallow fish often works to my advantage, as long as there are enough fish.

I’ve been fishing tournaments at some level for 40 years. For me, I’ve learned to just stay calm, stay confident, and fish how you’re comfortable fishing. You’ll have more success.