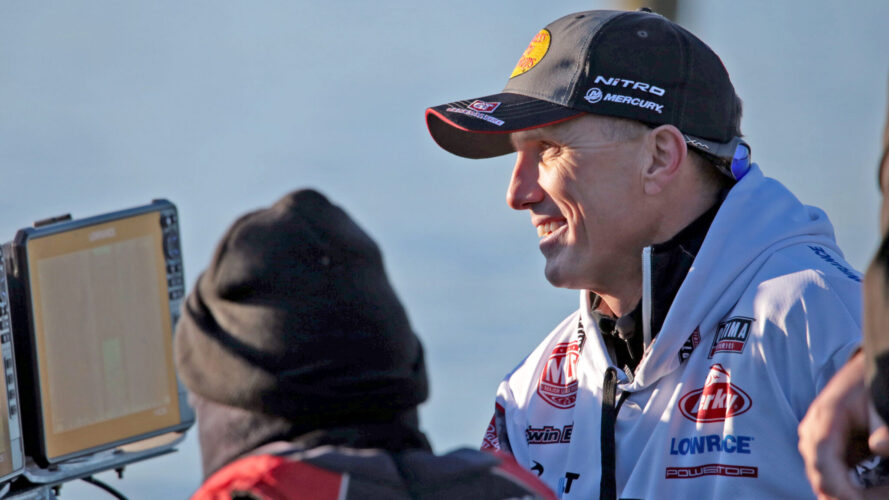 Ever since forward-facing sonar hit the bass world about four years ago, it’s been the topic of a lot of conversation and even a little controversy. Some people think it gives the angler too much of an advantage or that it’s fine for casual fishing, but should be prohibited in competition.

That kind of discussion seems to pop up whenever there’s a technological advancement or a hot new lure that the bass “simply can’t resist.” Truth is, there is no lure the bass can’t resist, and all the new technology products are simply tools. They help to get the job done, but they’re just part of the big picture.

Since I first got a look at Lowrance’s ActiveTarget system in 2020, I’ve been fascinated by forward-facing, live sonar, and I’ve spent a lot of time learning how to use it. I’m not going to tell you that I’ve mastered it yet, but I will say it’s teaching me a lot about bass behavior. It’s also shown me that we have a lot to learn and that forward-facing live sonar is going to help.

Now that I’ve spent more than a year with this technology on my boat, I can say that it’s a 12-month thing. It’s not just for one or two seasons, and it’s not just for shallow water or for fish that are chasing bait. Forward-facing sonar is here to stay, and it’s something that’s informing me every day I’m on the water.

I used to think bass were pretty lethargic in cold water — that they would mostly rest on or near the bottom or suspend over deep water and move very little … if at all. Turns out that’s not true.

Bass move a lot faster in winter than I thought they did. Yes, they often hold near the bottom or suspend and relate to schools of shad, but they’re more active than I imagined. Without getting in an insulated wet suit and diving down to take a look, I might never have learned that without ActiveTarget.

Forward-facing sonar has also taught me that I’ve probably spent too much time looking at the bottom of the lake … or the bank. As I’ve suspected (but never had the right tools to find out until now), there are a lot of suspended fish out there — fish in open water, fish that are behind us when we’re casting to shoreline cover.

Of course, we’ve always known they were there, but without the right tools to find them and show how they react to baitfish and lures, it was hard to locate them, to commit to them, or to understand what they were doing there and how they react to our efforts to catch them.

With ActiveTarget, I now have a tool for that, and I’m learning a lot … even on the days when I may not be catching a lot.

One of the coolest things about live, forward-facing sonar is that you can see how fish respond to lures in real time without actually sight fishing. Instead of looking into the water to see what the bass are doing and how they’re reacting to a bait, I can watch my Lowrance screen and see how a bass is acting as I pull a lure by.

When I’m looking for bass with my ActiveTarget sonar, there are a couple of baits that I tend to rely on. One is the Berkley Stunna jerkbait. It’s got a great action, and because it sinks very, very slowly when you pause it, I can stop it around cover or structures or even around a suspended fish and often get a strike.

Another lure I use a lot with forward-facing sonar is the Berkley PowerBait Power Swimmer. I like a size and color that matches the predominant baitfish in the area I’m fishing, and I fish it on a ball head jig. The swimbait is my choice when the fish are deeper than the jerkbait will run or when there’s a lot of cover and a single-hook lure comes through it better. Plus, I can count the swimbait down to the depth of the fish.

Once I’ve found some fish on my sonar and made a cast, I watch the screen to see how the bass react to the bait. If they attack it right away, I know they’re aggressive, and I have the right color and size. If they follow the lure, but won’t commit, I have some fine-tuning to do. Maybe I need to change my retrieve speed or cadence. Maybe I need to change lure color or size or type. Maybe my angle is wrong. I make the easiest changes first to see how the fish respond.

Eventually, I may find the perfect mix and start catching those fish, but sometimes repeated casts with the “wrong” retrieve or angle can shut them down. Then I’ll let them rest and come back later with a different plan.

This kind of approach doesn’t guarantee that I’ll catch fish, but it teaches me a lot, and I love that. Before forward-facing live sonar, we had to do a lot more guessing about how the fish were responding or why we weren’t getting bit. Now, there’s still plenty of guessing and plenty of trial and error, but each effort is a lesson rather than an exercise in frustration.

I hope we never figure out a fool-proof system that catches a bass every cast. It would take the challenge out of the sport, and that’s the part I love most.

Luckily, the bass are way too smart or way too wary for us to worry about that.