Scott Martin breaks through the shadow of his father 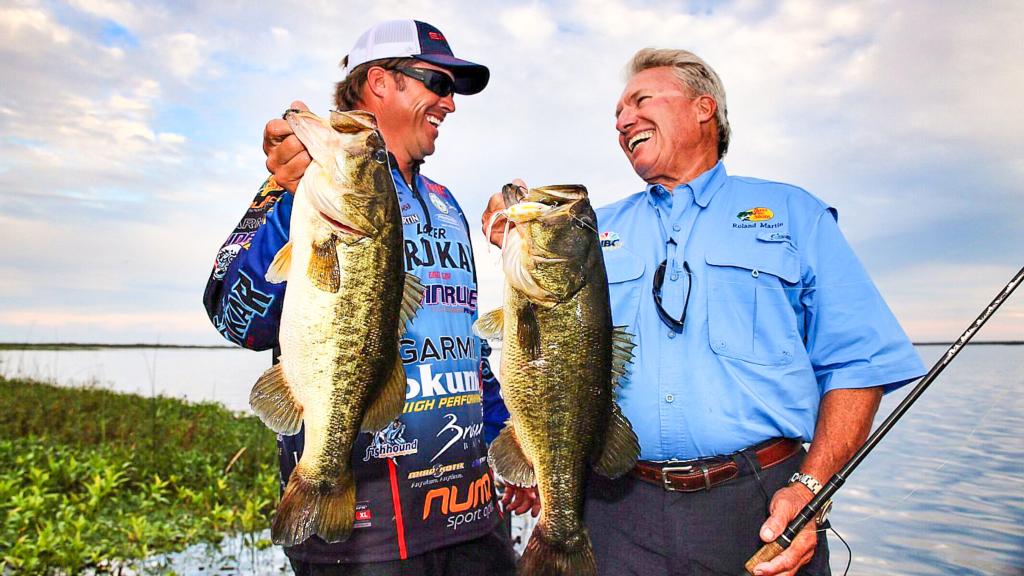 Frank Sinatra’s “My Way” might be too dramatic a description, but the message of a man’s commitment to individuality and doing things his way certainly fits Walmart FLW Tour pro Scott Martin.

As the son of angling great Roland Martin, Scott could have exploited his father’s stardom to take shortcuts on the pathway to fishing success. Instead, early on he decided that whatever accomplishments awaited him would be gained as a result of his own initiative and skill.

“People ask me all the time what it was like to grow up with a famous father in the sport of fishing,” Scott says. “I don’t know the difference because I grew up that way. He was already an established angler before I was born, so all through my childhood, he was Roland Martin."

“The thing I’m most proud of is that I really wanted to do it my own way,” continues Scott. “My dad took me fishing, of course, but a lot of people think, ‘Scott’s dad took him fishing 200 days a year and took him around and showed him all these great places and how to fish.’ But it really wasn’t that way. I fished with my dad only a handful of times a year growing up.”

Indeed, the elder Martin’s travel schedule kept him away from home a lot, so as a youngster Scott developed largely on his own many of the skills that would serve him later in life: hooking up and running a boat, learning a lake, and perfecting presentations. That, he says, made him a better fisherman than he might have otherwise become.

“I think people forget sometimes that fishing is an individual sport, and my success is based on the decisions I make on the water,” Scott observes. 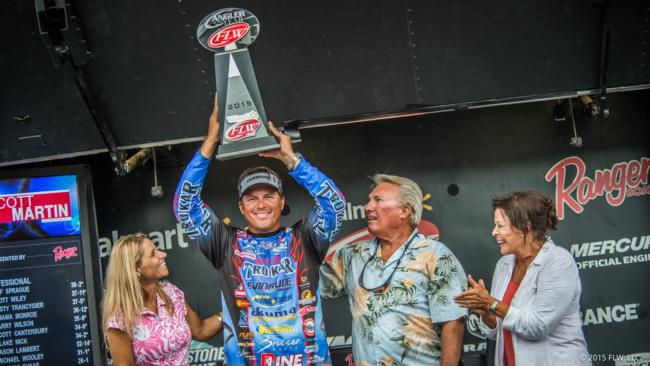 Those decisions finally culminated this season as Martin finally captured something that had eluded him for so long – the Angler of the Year title. It wasn't that Martin isn't the caliber of angler capable of winning the title that kept it out of reach throughout his career, instead, it was more of a mindset than anything. Winning and taking risks has always been the name of the game in tournaments for Martin, but this year he opted to play it more conservatively and try his hand at the AOY trophy. He went on to put together his best regular season to date, which included three top-20 finishes and two top 10s.

So now with five regular-season Tour-level wins, a Forrest Wood Cup title and an AOY trophy to his credit, there’s no denying Martin’s prowess for executing on the water. 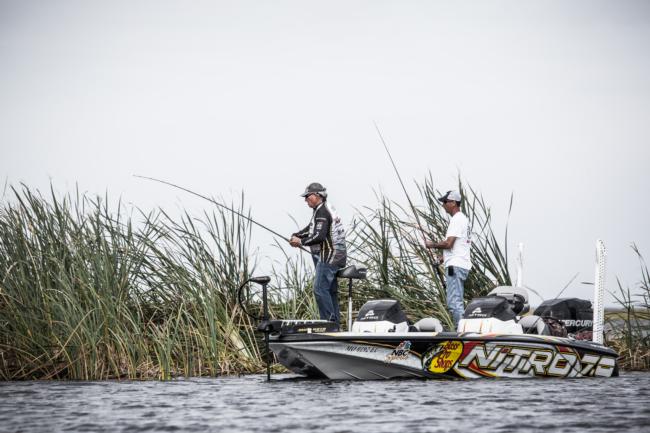 Growing up at his family’s marina – Roland Martin Marina and Resort – on Lake Okeechobee’s south end, Scott worked multiple jobs for his father and mother, Mary Ann, a well-accomplished angler and fishing-industry celebrity in her own right. His tasks ranged from marketing to waiting on tables. He also started guiding on the lake as a teenager and developed a business that he still runs between FLW seasons.

Following in his father’s tournament footsteps appealed to Scott early in his youth, but he was in no rush.

“It was always my intention. I always wanted to give it a shot, but I didn’t assume that I was going to be successful,” Scott notes. “I was actually very apprehensive. I had a lot of weight on my shoulders to prove myself – probably more than the average person. I wasn’t in a hurry. I wanted to get through school and carve out my path correctly.”

Scott recalls that a visit from FLW sparked the wildfire that flamed into his highly successful fishing career. When the Walmart FLW Tour came to Okeechobee in 1999, the tournament director at the time, Gale Stearns, offered Scott a co-angler spot as a courtesy for his family hosting the event. Scott accepted, placed second in his first FLW event and went on to qualify for the pro tour by winning Co-angler of the Year.

“At that moment, my career was launched,” Scott recounts.

In his first year on Tour, Scott won an event on the Pascagoula River in southern Mississippi. From there, he’d go on to tally 34 top-10 finishes from the front of the boat, including wins on Lake Champlain in 2004 and 2009, Okeechobee in 2010, the Forrest Wood Cup on Lake Ouachita in 2011, and the Potomac River in 2012. He’s had 15 Forrest Wood Cup appearances as a pro (and one as a co-angler) and amassed more than $2.3 million in tournament winnings.

“That wave got started, and there was never any turning back,” Scott says. “I didn’t intend to not return to school [at Santa Fe Community College in Gainesville], but that’s why I never did. There are moments of life when things happen, and I chose to go down that path. I made the right choice.” 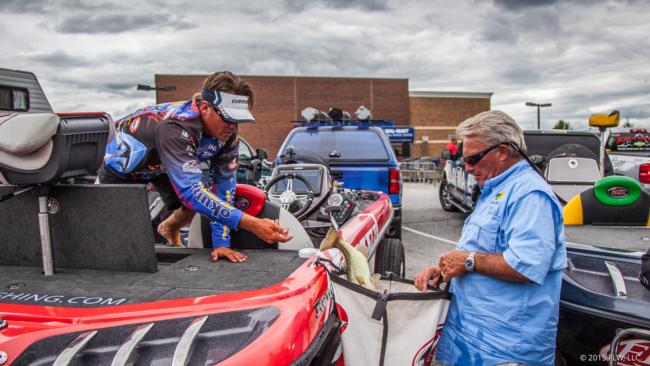 While Scott holds firmly to his commitment of individuality, he’s quick to credit his father’s impact on the foundational principles of his personal value system. A couple of key points:

Hard Work: “He’s out there daylight-to-dark every day, and he’s 75. I don’t know any angler who works harder than he has,” Scott says of his father.

On that note, he’s always appreciated the fact that name recognition means something in the fishing industry, but Scott says that doing the legwork himself was always the plan.

“If you look at my sponsors over the years, really, it’s almost the polar opposite of what my dad has,” Scott says. “When I started out, he was Triton, and I was Ranger; he was Mercury, and I was Evinrude; he was Lowrance, and I was Garmin.

“I never called my dad up and said, ‘Hey, can you call up a sponsor and see if they want to work with me,’” Scott adds. “I put together my own resume and made my own relationships. I never wanted to get anything that I didn’t feel like I deserved.”

TV Stardom: The same goes for TV. “Fishing with Roland Martin” has left an indelible mark on the industry – if for no other reason than the phrase “Oh, son!”

The younger Martin knew he wanted his own show. But again, he wanted to do it his way. For the past decade, “The Scott Martin Challenge” has delivered a unique blend of education and entertainment with its focus on competition-based programs. 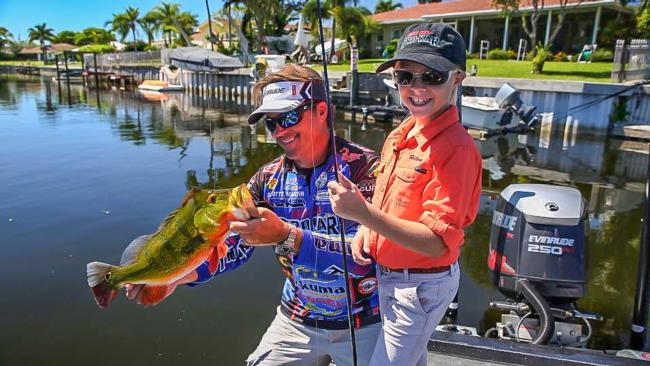 Today, Scott Martin continues the tradition of family fishing with his wife, Suzanne, and children Jacob (16), Reed (15), Hilary (10) and Amelia (8). Between the Big O and their vacation home in the Keys, the Martins do much of their bonding on or near the water.

“I’m blessed with a beautiful wife and four wonderful children, and the FLW schedule allows me to have plenty of time at home with them,” Scott says.

Any thoughts of the next generation of Martin pros?

“I don’t push it on them,” Scott says of his kids’ varying interest levels, “but I think there’s a good chance of it. I’m going to encourage them in whatever they want to do.”

Comments that suggest Scott couldn’t have done what he did in tournament fishing without staying in his father’s shadow are heard to this day, but that just goes with the territory. For Scott Martin, there’s no denying the positive influence of Roland; he’s just not banking on anything except his own fishing skill and work ethic. In that regard, Roland’s influence is more occasional shade rather than constant shadow.

Scott might never shake the moniker of “Roland Martin’s son,” but life has a funny way of coming full circle for those who travel along its frequently challenging course.

“Just a few years ago, a man walks up to my dad and me,” Scott recalls. “He looks at me, then he looks at my dad and says, ‘You’re Scott’s dad!’

“That’s when I knew I’d made it. I knew I finally broke through.”