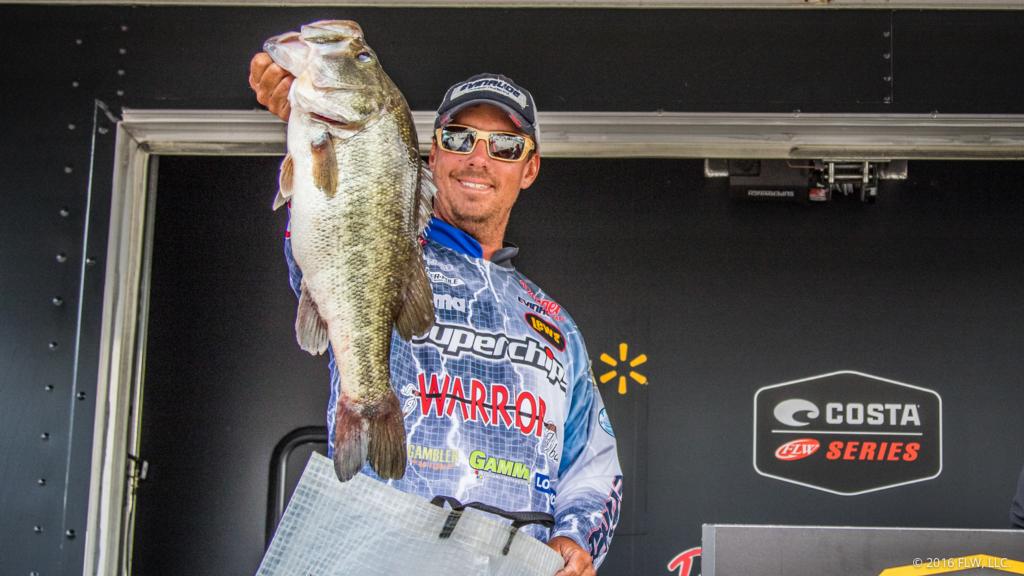 Glenn Browne is on a roll.

In 2015, the Ocala, Fla., pro won the Costa FLW Series Northern Division tournament on Lake Champlain en route to finishing third in the division’s Strike King Angler of the Year standings and qualifying for the Walmart FLW Tour.

This season, he followed up by winning his second Southeastern Division AOY title. The first came in 2008. And Browne currently sits in 17th place in the Walmart FLW Tour standings with two events remaining in the season.

What’s the catalyst for his recent success? It’s a mix of newfound confidence and shallow power-fishing skills. Browne shares an introspective look at his Costa FLW Series title run and the shallow-water system that he successfully employs nearly everywhere he goes. 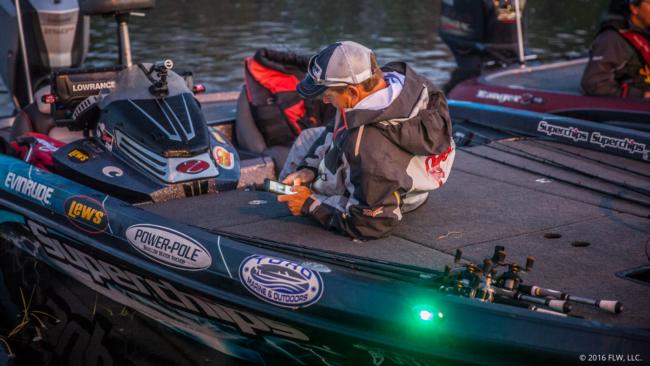 Sometimes, just having fun and feeling relaxed helps an angler to make the right decisions and find success on the water. It works for Browne.

“I really enjoy the Costa FLW Series because I don’t put as much pressure on myself,” says Browne. “I show up more relaxed because I’m familiar with the lakes, and we visit them at optimal times of the year. For example, we hit Okeechobee in January and Santee Cooper in the spring. I’ve been to many of the lakes, know what to look for and can find fish shallow, which suits my style.”

In addition to his familiarity and comfort with the venues, Browne appreciates the extended practice period that the FLW Series provides. There’s no off-limits period for FLW Series events, but Browne usually practices for four days, versus the maximum of three days allowed for FLW Tour events.

“That extra day really helps me to put patterns together and to look at spots a second time,” he says. “When practicing big bodies of water with limited time, you have to be very selective and focused on areas. With a fourth practice day, I can cover nearly all of the water I want to and dedicate my last day to expanding upon specific areas.”

Browne maintains a relaxed schedule while preparing for Series events as well. He doesn’t panic if he’s not the first one at the launch in the morning, nor if he pulls his boat out a couple of hours before dark. The extra rest helps him to maintain an open-mind and relaxed approach heading into tournament day. 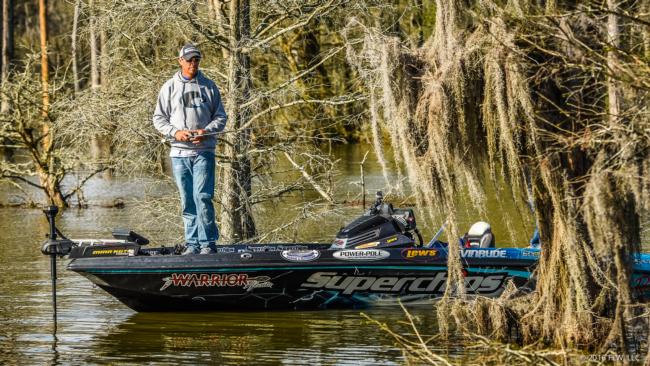 Over the last few years, Browne has firmly established himself among the shallow-fishing elite. North to south, east to west, it doesn’t seem to matter where he goes. He consistently assembles decent bags of quality fish that regularly place him in contention to win. When the Costa FLW Series visits famed shallow-fishing venues such as Wheeler, Santee Cooper, Okeechobee and Champlain, Browne immediately reaches for his flipping stick.

“There are three baits that seem to work no matter where I go: a Gambler Flipp’n Tube, a Warrior Baits Quiver Bug and a black-and-blue jig,” offers Browne. “The tube is my main bait, however, and has accounted for a large part of my success over the years. It fishes really fast. It’s not like a jig that has a tendency to hang a lot. It’s easy-in, easy-out of thick cover. You can slide it through bushes, skip it under docks and pitch it to bedding fish. Gambler’s tube is unique in its shape and cut. It falls different than any other tubes I’ve tried, and it generates more bites as a result.”

For situations requiring a dead-stick presentation or a bulkier creature profile, such as when bed-fishing, Browne opts for the Quiver Bug. A more traditional black-and-blue jig occupies the third and final spot in his flipping rotation. For all three presentations, Browne rigs his flipping baits on a 7 1/2-foot Lew’s flipping stick coupled with a Team Lew’s Pro Magnesium Speed Spool Series reel. He flips his favored trio on 20-pound-test fluorocarbon line and utilizes a somewhat light 5/16-ounce tungsten weight wherever possible.

“There are very few places where I cannot apply one of those presentations. Even if I am on Lake Lanier in 40 feet of water, chances are I have a flipping stick lying somewhere on the deck,” he says. “Sooner or later there might be a dock or a tree on shore or a spot upriver I will want to try. My flipping stick doesn’t ever leave the boat.” 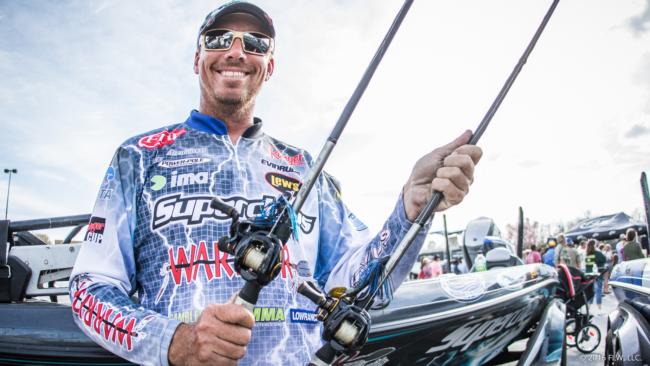 Browne’s confidence in his shallow-water flipping system in the Costa FLW Series has, in turn, lifted his confidence on the Walmart FLW Tour. In the ultra-competitive setting of the FLW Tour, Browne believes that self-confidence plays a huge role in success.

“I do better on the lakes that fish good, but aren’t necessarily whack-fests,” he says. “Confidence is key when you are trying to grind out five quality bites over the course of a tournament day. Those quality bites are often the difference between cashing a check and contending to win. At lakes like Guntersville, where everyone seems to catch them, I don’t necessarily do as well.”

Success breeds success, according to Browne.

“When things are going your way, you’re cashing checks and are more relaxed on the water. Things come naturally,” he adds. “That’s something I’ve really tried to work on this year. I believe if you keep yourself focused, keep emotions in check, you fish that much better. When you are tense or lose your temper, things are bound to happen, and you’ll lose some fish as a result.”

Browne notes that he doesn’t feel as much pressure as he once did as a newcomer to the FLW Tour a few years ago. The rise in his self-confidence has resulted in a proportional increase in his Tour standings. 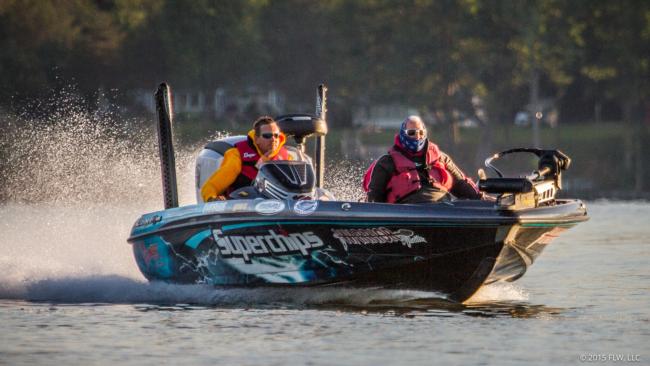 Looking ahead to the Costa FLW Series Championship

Browne eagerly awaits the culmination of his 2016 season at the Costa FLW Series Championship, which is scheduled for Table Rock Lake in early November. Much to the chagrin of his fellow competitors, he expects shallow-water fish to be in play come fall on the popular Missouri impoundment.

“If you look back to the 2008 Championship, many of the guys that did really well caught them shallow. They caught them cranking a square-bill or Wiggle Wart,” says Browne. “Last year, during the Bassmaster Central Open in October, topwater was a factor. James Watson won on a Whopper Plopper, and Rick Clunn did well fishing a Zara Spook. There are going to be fish both on the bank and out deep, so you can fish to your strengths. I would expect that weights will be decent, perhaps 15 or 16 pounds a day average to win.”

With his recent success, growing confidence and fish found shallow, Glenn Browne cannot be counted out as a legitimate contender for the Costa FLW Series Championship come November.

Lake Okeechobee, Jan. 14-16: Browne flipped thick mats in the Cochrans Pass area with a Warrior Baits Quiver Bug coupled with a 2-ounce Reins tungsten weight. On day two, he caught his final weight early, prior to a severe storm that hit the lake and subsequently shut fishing down for most competitors. Browne finished in second place.

Santee Cooper, March 10-12: Pitching a big, homemade 1-ounce black-and-blue jig to cypress trees accounted for most of Browne’s tournament haul. With five minutes remaining prior to check-in on the final day, he caught a 5-pound-plus kicker near the launch that boosted his weight by 2 pounds and elevated him to third place.

Wheeler Lake, May 12-14: Browne fished a SPRO Bronzeye Frog early in the morning, targeting shad spawn fish, then flipped a Gambler Flipp’n Tube the remainder of day. His 7-pound, 2-ounce kicker on day two launched him into the final day of competition. He finished fifth.

For winning the 2016 Costa FLW Series Southeastern Division Strike King Angler of the Year award, Glenn Browne earned a $2,000 prize package that includes paid deposits for the 2017 season. The top 40 pros and 40 co-anglers in the standings qualified for the Costa FLW Series Championship.