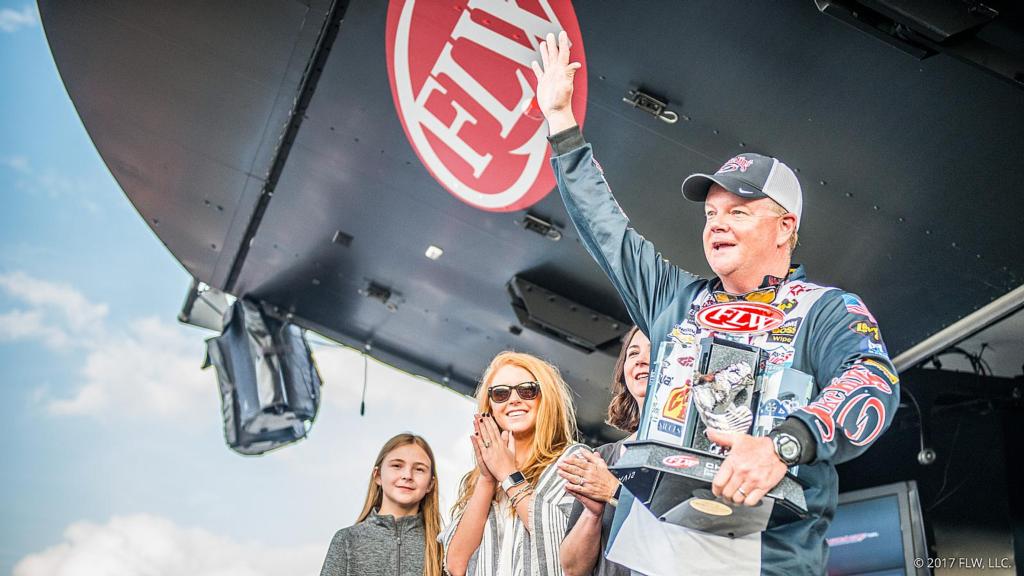 FLW is looking forward to getting back on the water once it’s safe to come together and fish tournaments again. In the meantime, we’ll be offering a little retrospective on some of the all-time greats who’ve fished with FLW through the years.

This time around we’re shining the spotlight on Mark Rose. From his Angler of the Year title to winning multiple FLW Tour events and even joining the bass-fishing millionaire club, it’s easy to see why the Arkansas pro is one of the best to have ever fished with FLW.

Here’s a look at 10 highlights from Rose’s career from over the years: 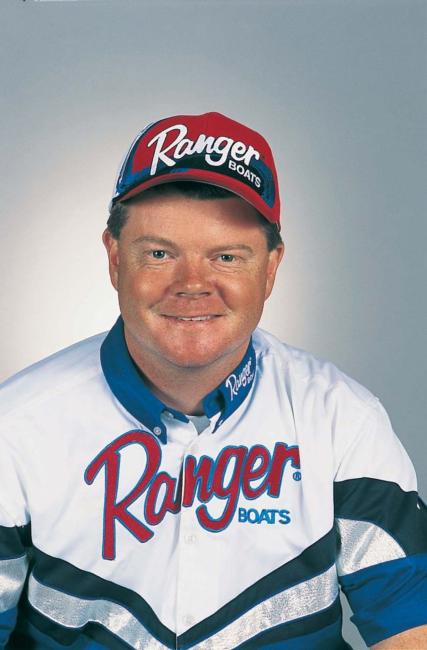 Like most pros, Mark Rose started out as a working man with a fishing passion. He started fishing local tournaments and dabbling in some BFL’s and FLW Series events, but it wasn’t until 1999 that Rose would step his game up.

His first FLW Tour event as a pro was in April of 1999 on Beaver Lake, and it didn’t go well, as Rose finished 136th. With a Tour event scheduled for May on the Mississippi River out of Memphis, Tenn., which was basically his home water, Rose signed up. He’d rebound and finish the event in third, banking $24,500 for his effort. While the third and final event he fished that season on Lake St. Clair also hit him with a triple-digit finish (though he’d get redemption at St. Clair down the road), his top-five finish on the Mississippi was more than enough to give him the confidence to quit his job with the Boy Scouts of America and take a run at fishing full-time. 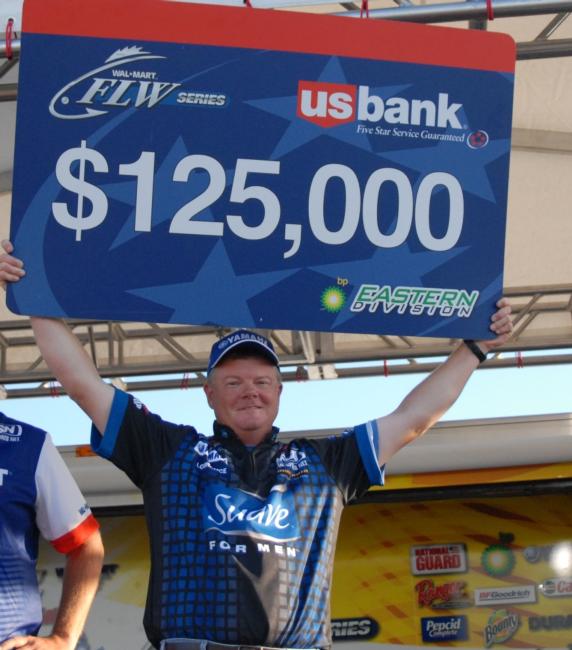 After several years of cashing a few checks and making top 10s, Rose finally got to put his hands on a Tour trophy, along with the $125,000 payday in October of 2007.

The win came in wire-to-wire fashion on Pickwick Lake and would be the first time Rose would dominate in a major event on the Tennessee River, but certainly not the last.

In preparation for the event, Rose put in his time pre-practicing on Pickwick, which he normally wouldn’t do. It paid off as Rose located a few offshore schools on mussel beds in 14 to 16 feet of water and thanks to warmer weather they stayed put for the event. He more or less relied entirely on a ¾-ounce Strike King football jig with a Rage Craw trailer to catch 60 pounds, 10 ounces over four days.

“I hardly ever do that,” Rose said of his pre-tournament practice. “But I needed to make up some ground in the points to qualify for the FLW Series East/West shootout and I wanted to do everything I could to make that happen.

“This win is something special for my family and my sponsors, that’s who this is for, not me,” he said. “I don’t have to win tournaments to be content. I give God all the glory for allowing me to make a living fishing.” 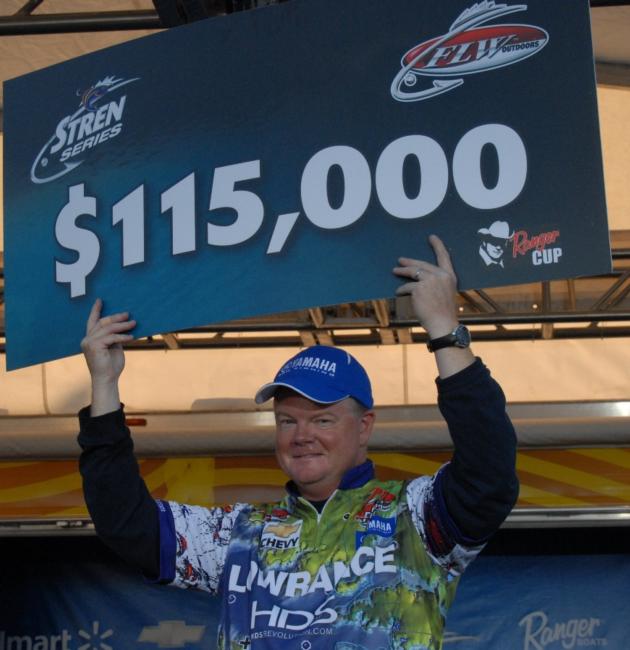 For the second time in three years, Rose won yet another title on Pickwick, only this time it was the FLW Series Championship. It didn’t come as any surprise that he again led wire-to wire.

Making an 80-mile run from takeoff, Rose actually exploited the spotted bass in Bay Springs Lake, which connects to Pickwick via the Tombigbee Waterway. And while he caught some schoolers on Pickwick, the majority of his catch came from Bay Springs thanks to a jerkbait.

Here’s what Rose had to say about his second win on Pickwick:

“I’ve got a special place in my heart for this lake,” Rose said after his win today. “I just love it here. I’ve got a lot of great friends up here, and the lake just fits everything about the way I like to fish. Whenever my boat hits this lake, I automatically feel right at home. I live in Arkansas, but Pickwick is two and a half hours from my driveway, and I’ve fished it a lot over the years.” 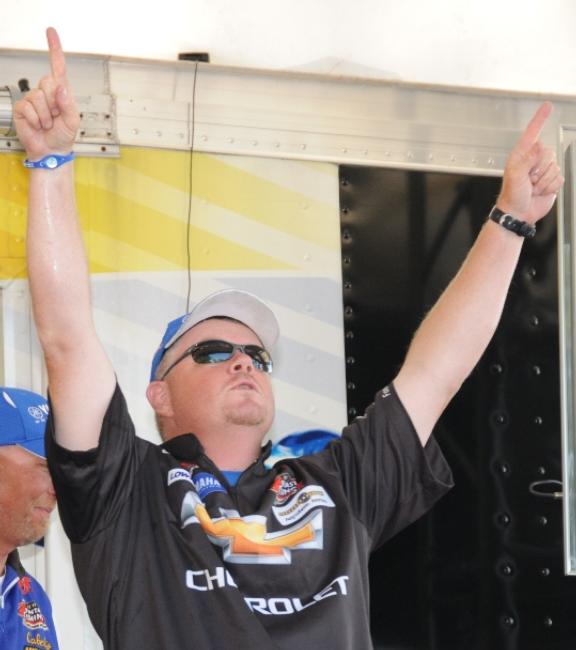 In June of 2010, Rose finished runner-up in the Tour event on Lake Guntersville. That September he’d get redemption on the Tennessee River and rack up his second Tour win, this time on Lake Chickamauga.

His hard work and dedication to learning how to find and catch offshore bass along the Tennessee River was displayed in full force. With his third win on the fishery, he cemented himself as one of the premier offshore anglers in the game. Armed with five Lowrance graphs on his boat, Rose targeted ledges anywhere from 15- to 30-feet deep with a ¾-ounce Strike King football jig or Strike King Sexy Spoon.

“I love it,” said Rose of catching bass on offshore structure. “It’s a culmination of understanding so many subtle things: bottom composition, structure, current, fish position, bait, reading electronics, proper lure presentation. It’s like a giant combination lock – once you get the right combination dialed in, there’s no faster way to catch quality bass.

“As much as I’ve studied TVA impoundments, the one thing that always eludes me is the weekends, which is when most major tournaments end,” Rose revealed. “They just don’t run much current on the weekends, and it really makes things much tougher than during the week when they’re pumping water. If I could ever figure out how to catch them on Saturdays and Sundays on TVA lakes, then I might be a little closer to putting this whole ledge-fishing puzzle together.” 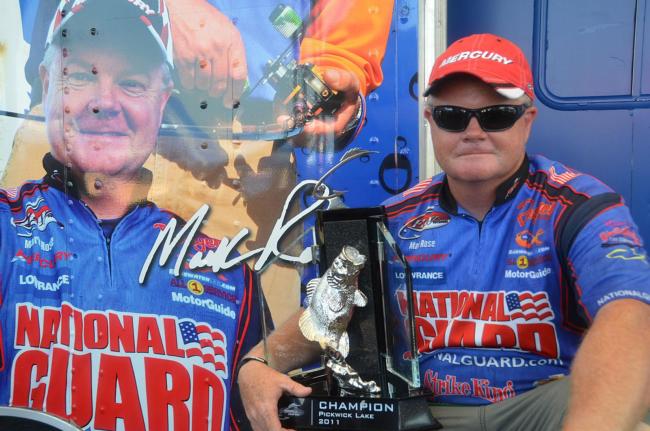 You know Rose was licking his chops to get back out on Pickwick in 2011 for the FLW Tour stop there in July and he did what he does best – crush fish offshore. Though, it wouldn’t be his easiest win on the Tennessee River. On the final day with only around 9 pounds in the box at noon Rose was running out of time and options. He opted to leave his primary spot and as he was running down the lake he noticed current pushing against a few channel markers, so he made the call to run to a 25-foot hole where he had caught the majority of his big fish during the week. The last-minute decision paid off. He quickly landed a 5-pounder and two 3-pounders and it was enough to help him lock up the win with over 77 pounds in four days – winning by over 5 pounds.

This event really drove home the point that he was the “ledgemaster” and it was hard to deny it. 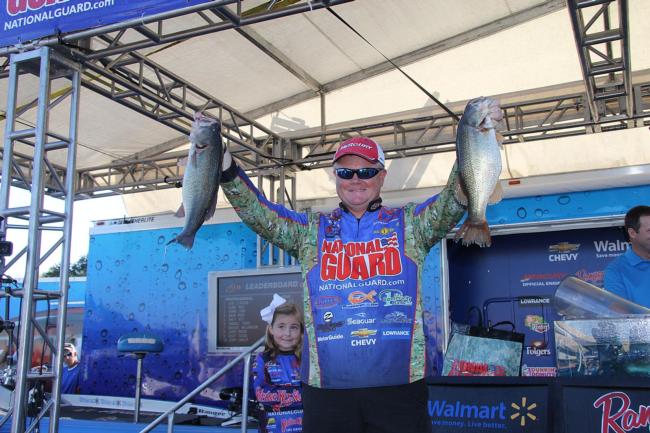 If you thought Rose would let off the gas, well, you’d be wrong. In 2012, the Arkansas pro laid claim to his fourth Tour title on the Tennessee River, this time on Wheeler Lake. Oh, and he also won it wire-to-wire.

Thanks to his electronics and a slew of offshore baits, Rose would dominate the event, winning by nearly 13 pounds and adding another $125,000 to his bank account.

“I just felt comfortable out there – I just get in tune with it,” he said. “It’s a passion I have. I really like it. I like it when I’m not catching anything because I’m trying to figure them out.

“I made a conscious effort about four of five years ago to get offshore. There’s one of the best ledge fishermen in the country in the audience here – Randy Haynes (FLW competitor from Counce, Tenn.) – and I owe him a lot. He taught me a lot and spent a lot of time with me when I first started getting out, so I just have to thank him.” 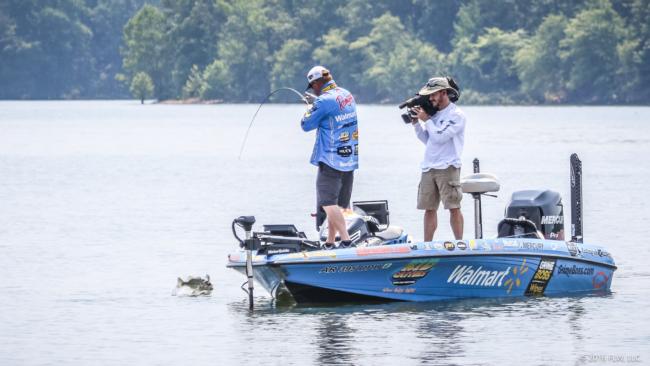 Though Rose surpassed $1 million in career earnings with his 2009 FLW Series Championship win, he took it to the next level when he broke the $2 million mark in 2016 with his third-place Tour finish on Kentucky Lake. His last win on Wheeler in 2012 put him over $1.6 million and with 10 top 10s and several other top 50 finishes from then until 2016, it seemed fitting that the Tennessee River would be the place to push him into the history books.

Currently, he sits fourth in the all-time money winners list and is one of only nine pros to surpass the $2 million mark in FLW winnings. 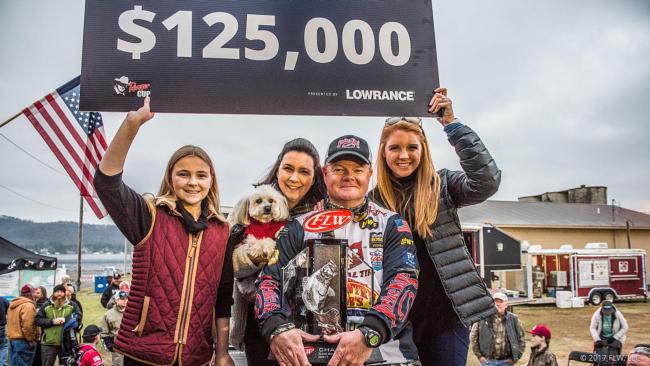 In 2017 with the Tour season starting on famed Lake Guntersville there were several anglers in the field to watch from a local standpoint. Being held in early February put a different twist on the Tennessee River as well, considering the Tour usually ventured to those waters in the summer and early fall when the fish could be found on the ledges. But that’s when Rose broke out of his “ledgemaster” mold and proved that he could win on the Tennessee River in the winter, too. Primarily cranking in Browns Creek, Rose managed to edge out Bryan Thrift for the fifth Tour title of his career.

Just two weeks later on the second stop of the season he’d win on Lake Travis, making him the first ever back-to-back Tour winner in FLW history. Oddly enough, this tournament came down to another Thrift-Rose shootout on the final day, with Rose pulling it off thanks to some deep, flat points on the lower end of the lake.

“I’m blown away right now,” Rose said after accepting the trophy. “I’m speechless. I consider Bryan to be the best angler on the planet. He is what pushes me every day to be a better angler. This kind of competition at the top of the game is what this sport is all about. I don’t even know what to say right now except that God is good.”

With his back-to-back wins, Rose has also broken his reputation of being a Tennessee Valley-only winner. All of his previous Tour wins have been along the Tennessee River. This one, however, marks his first win away from his favorite river basin, proving he is a far more diverse angler than just being a summertime “ledgemaster.”

“All I’ve ever wanted to do is fish for a living,” Rose says. “So it’s a huge honor to be the first pro in FLW Tour history to win back-to-back. The Guntersville and Travis trophies will always be side-by-side at home for that special reason.” 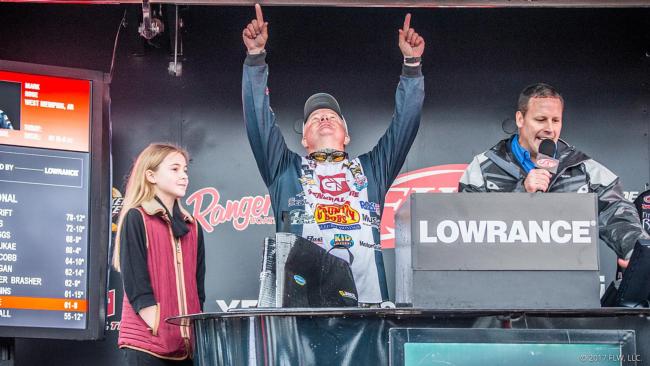 Obviously winning back-to-back Tour events in a single season is quite the accomplishment, and not only did Rose make it in the history books for that, but those two wins also pushed him into a tie for the fourth most FLW Tour wins. Rose is tied with David Fritts with six total Tour wins and only Thrift (7 wins), Brent Ehrler (7) and Scott Martin (8) have more. Not a bad mix of company to be a part of. 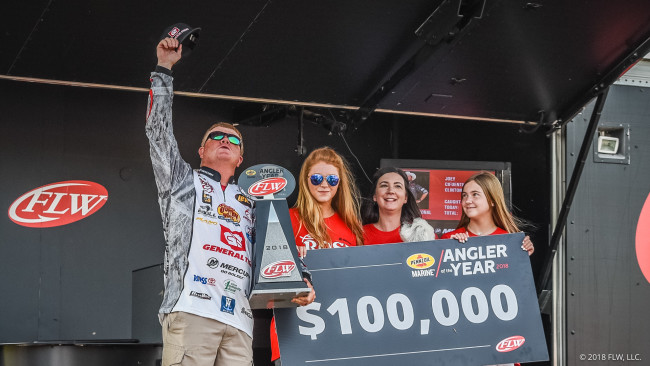 You’d think winning multiple Tour events in 2017 would be the year Rose would finally get his hands on an Angler of the Year trophy. Instead, Rose got it done the next year, and it came down to the final event on Lake St. Clair – which is where he suffered a triple-digit finish in his first year fishing on Tour. Rose didn’t have the best event at St. Clair, but his 64-point lead coming into the event was enough of a cushion to fend off Scott Martin. When the day-three weigh-in was over, Rose was crowned Angler of the Year. With only two top 10s that year, Rose cashed checks in six of seven Tour events, proving that consistency across the country is the ticket for AOY.

“I know I might’ve gotten more points than anybody else and won the money, but Bryan Thrift and Scott Martin are anglers of the year, and they’re there every year,” says Rose. “I don’t know that AOY is the best angler every year. I like to think it is this time. But there are people in this sport that day in and day out are really great, so it’s hard for me to say I’m the best.”

It was a fitting end to his FLW career, as he’d join the MLF Bass Pro Tour in 2019, where he still competes and is 23rd in the points this season. With as much as he’s accomplished throughout his career, you can bet he’s not done making history anytime soon.