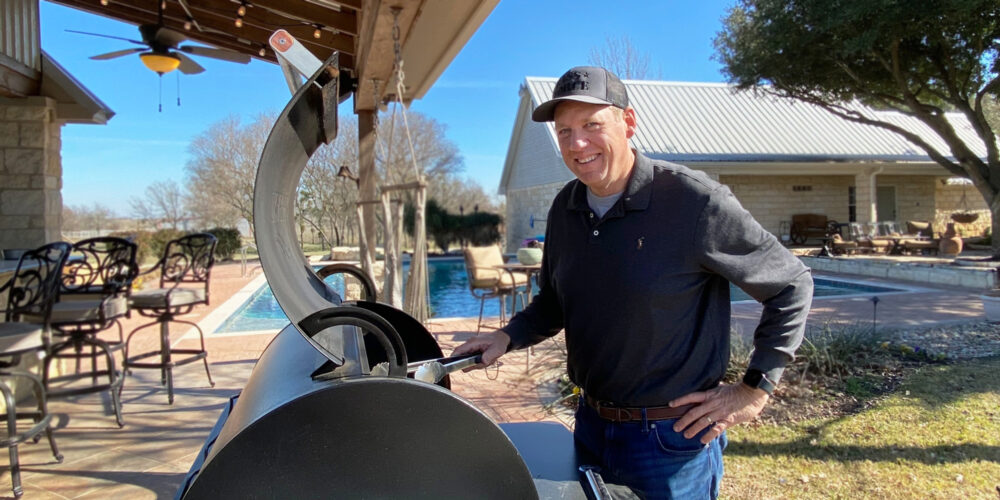 Alton Jones certainly knows how to light up the SCORETRACKER®, but when he’s not on the water, the Texas pro is busy lighting up his backyard grills.

For someone who loves to grill as much as Jones, you’d be surprised to know that he didn’t grow up cooking.

“No, I grew up eating,” Jones jokes. “My mom is a fantastic cook, so I always liked food.”

Jones started learning to cook after he and his wife, Jimmye Sue, got married. The couple became good friends with grill-master Robert Mills, whom Jones met in Sunday School in 1986.

“Robert is the best griller I’ve ever known,” Jones says. “We got to where Jimmye Sue and I were hanging out with Robert and his family and he was grilling, and I’d go out and grill with him. It was really my first experience with it. I never knew I loved it so much.”

Back in 2011, Jones and Mills were invited to participate in the H-E-B Celebrity Cook-Off in Waco, Texas, a contest that raises money for the Waco Independent School District Foundation. This cook-off typically has 300 entries; most are local restaurants, with a few celebrity invites extended to central-Texas personalities like Jones.

Jones and Mills may not have had the cooking credentials of the other teams, but they ended up winning the entrée competition.

In total, they’ve won this cook-off three different times: 2011, 2012, and 2013. One year, the duo won with their “White Wings,” a chicken wing recipe that Jones says is so good that it caught the attention of the owner of a popular restaurant at Baylor University.

“He was at the booth right next to ours and we ended up winning with a dish that he cooks at his restaurant,” Jones said. “But frankly, the dish that he cooks isn’t nearly, nearly as good as ours, and the whole evening he tried to get our recipe from us. We just wouldn’t give it to him. It was all in fun, but it was neat seeing him want our recipe for grilling chicken wings.”

The grilling duo also won awards for their pork tenderloin and Jones’ version of Bananas Foster.

Learning Through Trial and Error

Even though Jones is admittedly handy on the grill, the skills didn’t come naturally. He admits that he’s done plenty of research by watching videos on YouTube, and he’s experienced some failures.

The most memorable mishap? Brisket.

“The first brisket I ever made was absolutely inedible,” Jones jokes. “Brisket is hard to learn with, and it’s such an expensive cut of meat. It’s hard when that turns out to be a bad first run.”

But that didn’t discourage him.

“Two or three briskets later, they were pretty darn good and now my briskets, in my opinion, I’ll put them up against anybody’s,” Jones says.

Jones has plenty of tips for grilling the perfect steak, but one of his most important tips is to start out with a good cut of meat.

“I have people a come up to me and say ‘I bought my son a reel for Christmas and he can’t cast this baitcaster.’ I can’t even cast it either because it’s a $20 reel! If you’re going to teach your kids to fish you need to buy them good stuff. If you want to learn how to cook good steaks, start with good steaks.”

Another grilling key is to learn how to monitor the internal temperature.

“If you watch what internal temperature you’re targeting, you can cook a great piece of meat every single time,” Jones says.

If you want to grill the perfect steak, Jones recommends using the “reverse searing” method. Instead of searing your steak first, you bring it to temperature slowly on the grill and sear it at the end.

“I put it on the Traeger at a low temperature, like 225 degrees, and put a probe in the middle, and you cook it until your internal temperature of that meat is absolutely perfect,” he says.

With the probe, he’s able to watch the internal temperature of the steak through WiFi on his cell phone. Once it reaches his desired temperature, he transfers it to another grill that’s already heated up to 600 degrees.

“I have my Big Green Egg sitting right next to the Traeger, so I can flash-sear that steak real quick for 20 to 30 seconds on each side at 600 degrees,” Jones says.

What He Enjoys Most About Grilling

One of the first things that guests to Jones’ home in Waco see when they enter the back yard is an outdoor kitchen with three grills, a spacious granite countertop bar, and two large-screen TVs.

That kitchen is Jones’ favorite place in his home, a place where he can cook and entertain friends (something he truly enjoys doing).

“The best times I have cooking is when we’re entertaining groups of friends at the house,” Jones admits. “It’s just really fun to make your grilling and cooking a social activity.”

“I do a reverse sear of about a 2- to 3-inch-thick filet mignon, bacon-wrapped. That’s my favorite thing to grill. It’s easy, quick and it’s absolutely delicious when you learn how to do it. It’s something we probably have every other week at my house.”

What’s your family’s favorite dish that you make?

“The one they request the most is the White Wings. It takes a lot of time to make when you make them the right way, so you basically have to set aside a whole day. And that’s why the ones you get at restaurants aren’t as good because they aren’t as labor-intensive as how we prepare ours.”

With all of your traveling, do you have a favorite restaurant that you always have to go to when in that area?

“Since we travel and eat out so much, we have favorite restaurants in almost every region of the country. But if I just had to pick one it would be Captain Billy’s Crab House on the Potomac River. I would be 500 pounds if I lived anywhere near that place.”

It’s noticeable that you’ve lost a lot of weight. How did your cooking change?

“My smoking on the Traeger really helped me lose the weight. Smoking takes a little bit more time to cook everything rather than flashing it on a hot grill and it helped me eat less just being around the smell of cooking the food.”

While traveling, is it hard to eat at a restaurant and have them cook the steak for you?

“I’ll tell you what, once you become good on a grill, no steak at any restaurant will ever measure up to the one you make yourself.”

What’s the most difficult meat that you’ve ever cooked?

“Brisket. It’s so different than any other piece of meat you cook. You could put two 18-pound briskets on the grill at the same time and they will both cook differently. It’s challenging.”