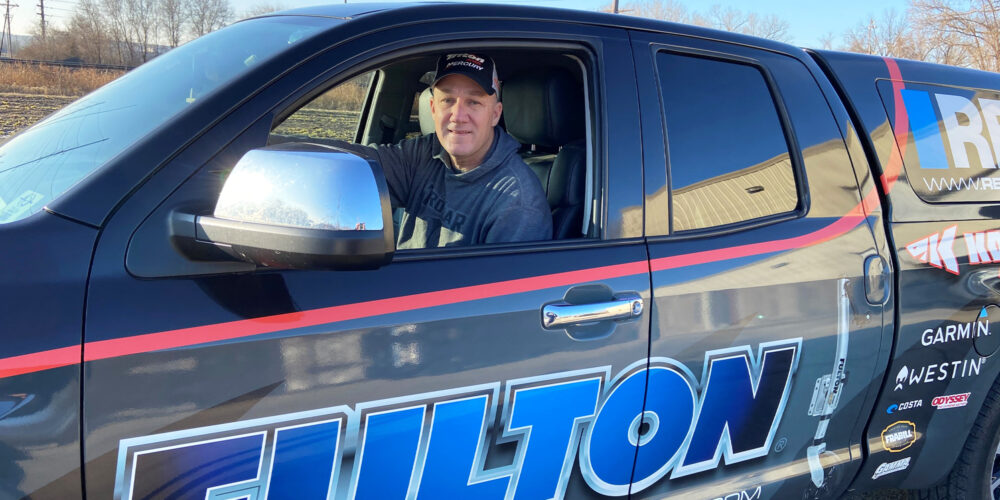 As he left his home in Lake Quivira, Kansas to begin the 15- to 16-hour drive to Eufaula, Alabama – site of the first stop on the 2020 MLF Bass Pro Tour regular-season schedule – Fulton pro Brent Chapman began the first leg of a season-long journey that will take him to Alabama, Florida, Texas, North Carolina, Oklahoma, Wisconsin, New York and Vermont.

If he fishes well – and Chapman fully expects to – there’s also a likelihood that he’ll compete at the MLF Heavy Hitters event (another trip to Florida), and some MLF Cup events (destinations unknown).

Chapman suspects that his 2020 season will encompass about 30,000 road miles and many hours of sitting with his hands on a steering wheel.

“One of the worst parts of our job as professional anglers is driving,” Chapman admits. “It gets worse every year as I’ve gotten older. I’ve learned the hard way that driving long distances is one of the worst things you can do for your body: All we’re ever focused on is getting to next event or getting home, and most of us don’t do any of the things that we should be doing to keep our bodies healthy while we’re driving.”

As told in a previous feature detailing Chapman’s rehab of a nagging shoulder injury, Chapman works closely with Travis Perret, the proprietor of Exercise Therapy of Kansas City. Perret specializes in eliminating chronic pain by focusing on postural alignment and muscle balance, and the multitude of hours and miles that Chapman spends behind the wheel are part of the overall body-maintenance routine that Perret has developed for the Kansas pro.

“Most anglers don’t think of their endeavors as athletic in nature, and that’s one reason why so many of them are walloped with chronic pain, such as knee pain, hip pain, elbow pain and back pain,” Perret says.

Perret notes that the many hours and miles that anglers spend driving to and from fisheries provoke the most dramatic of posture woes, which can create a variety of pains. He says that there’s a mistaken notion in the angling world that lumbar supports and state-of-the-art seats in modern-day two vehicles will keep their body flexible and in alignment.

But Perret asserts that those amenities do not keep an angler’s posture woes at bay.

“Anglers who drive three or more hours before they start to fish need to establish a ‘posture bridge’ from the long drive before hopping into their boat and spending the day wielding untold numbers of casts,” Perret says. “Not to create that posture bridge is a step to dysfunction, which leads to chronic pain. And when anglers are in pain, they can’t fish contently and efficiently.

Perret points out that most anglers sit incorrectly while they’re driving.

Some drivers can improve their posture by simply placing a 6-inch-wide foam pillow between their knees.

Anglers need to treat themselves as athletes. Thus, they need to take care of their bodies by establishing a maintenance routine. For example, when they are getting gasoline or stopping to eat, they need to do a couple of the following types of stretches: arm circles, counter stretches, elbow curls, standing overhead stretches, and quad stretches.

After the long drive has come to an end, Perret recommends that an angler should rest and sleep. Then in the morning before the angler is afloat, he should do a series of maintenance exercises, such as arm circles, elbow curls, foot circles and flexes, sitting floor twists, cats and dogs, kneeling groin stretch, downward dog, and air bench.

“Fishermen need to understand that movement is the key. Muscles move bones, and if the muscles don’t move properly, anglers need to address that first. They also need to understand that correct movement doesn’t just happen during exercises. Some exercises can actually create bigger imbalances and bigger problems. It has to be the correct movement for their specific imbalances. I get clients who think that because they work out they can address any movement problems. That is incorrect! Muscular imbalance and posture misalignment have to be specifically addressed with therapy-type movements.”

Chapman hopes that he can remain pain-free throughout the 2020 Bass Pro Tour by following Perret’s driving prescriptions and exercise routines. He also thinks other anglers should follow suit, and if they are plagued by pain-ridden feet, knees, hips, backs, shoulders, elbows, wrists, hands, and necks, they should contact Perret.