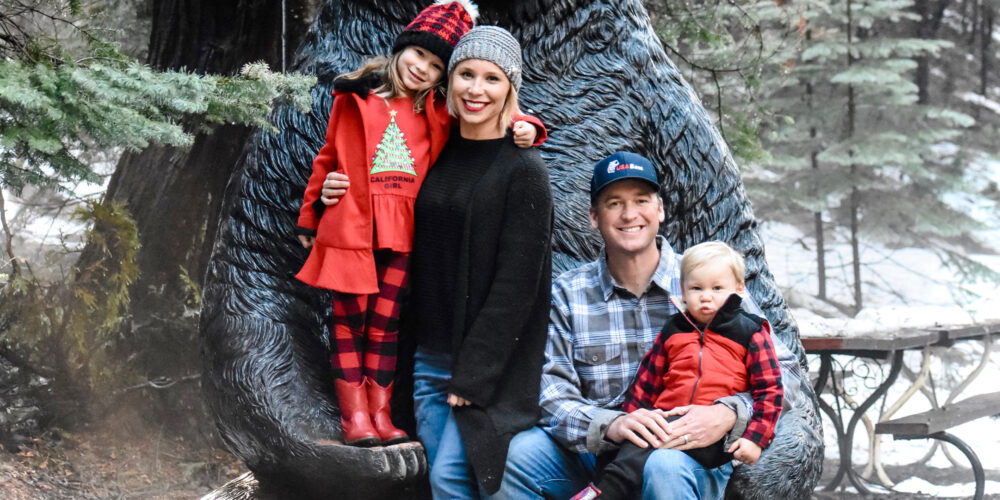 It’s that time of year again where families gather to continue holiday traditions and make new memories. From cookie decorating to watching loved ones unwrap presents, to spending the day fishing or preparing traditional Christmas lobster dinners, several MLF anglers let us in on what Christmastime is like in their households.

Because he travels so much during the seven-month competition season, Walker looks forward to Christmas and New Year’s because he gets to stay at home and spend time with his family, continuing holiday traditions.

“Our Christmas traditions include lots of baking!.” Walker says. “The girls bake cookies and spend hours decorating them all. I, of course, am the official taste tester. The hardest part is picking out which ones to leave for Santa! Another tradition has been since the girls were babies: We always finish off Christmas Eve night with reading ‘The Night Before Christmas.’”

This Christmas, Alton Jones, Jr. is looking forward to getting back to some family traditions by hitting the slopes in Colorado.

“This Christmas my wife and I are splitting time between her family in Woodbury, MN and then meeting up with my family in Colorado,” Jones says. “Growing up, my family and I spent every Christmas and New Year at our place in Buena Vista, CO. Unfortunately, we haven’t been able to do this for the past few years, but this year my wife and I will be able to join my family up there, and we’re very excited to do that.”

Jones says that snow skiing with his dad is one of my favorite Christmas memories.

“It’s something that we both love to do,” he admits. “Our main goal will be not breaking a leg before the 2020 Bass Pro Tour season!”

Mike Iaconelli says his favorite thing about Christmas will always be waking up on Christmas morning with all of his children at home. As his kids get older, this memory/tradition gets better and better.

“We have several Christmas traditions and Christmas Eve dinner is one of them,” Iaconelli says. “Every year on Christmas Eve, we do a big dinner at the house with lots of family attending. We get dressed up, play Christmas music and eat a fabulous dinner with the same menu every year: lobster and lamb!

“Our second Christmas Day tradition is fishing. For the last 10 years, we go out fishing for a few hours on our home lake after all of the presents are opened. The weather can be super cold or mild, and the fishing is usually pretty good!”

Mark Davis and his family spend the biggest part of Christmas at their leased ranch in Texas.

“We get a house-sitter for the few weeks, load up the presents and head south,” Davis says. “I have hunted and fished there with all three of our boys. We have made many great outdoor memories there.”

Each year, Bradley Roy looks forward to this time of year to go fishing with his dad. It brings back many memories of when he was a child.

“My favorite Christmas memories are going fishing with my dad before Christmas dinners and all during the Christmas school break,” Roy says. “I still look forward to this time of year to do the same fishing with him. This year, my plan for Christmas and New Year is to spend time with my family and get as much fishing in as I can.”

Cliff Crochet explained that his favorite memories as a child were seeing Santa’s boot prints in the ashes in the fireplace, and trying to catch Santa every year. Now that he has kids of his own, it’s all about making the holidays memorable for his sons.

“We have a few Christmas traditions that include baking and decorating sugar cookies, eating gumbo on Christmas Eve, and watching ‘A Christmas Story’ ALL day,” Crochet says.

“We have a great time and make many memories at duck camp,” Morgan says. “We hunt in the mornings and have breakfast in the blind. Then, we hang out during the day with fun activities and usually gather to cook meals every evening. We have traveled to duck camp during the holidays for the past 20 years and have many memories of Keylee at camp as a baby up to now as a 17-year-old.”

After their daughter, Emma, was born, the Birge family started to create new traditions as a young family: taking Emma to see the Chickasha Festival of Lights in Oklahoma and going to dinner afterwards.

“Our plans for Christmas include waking up early Christmas morning and letting Emma unwrap her presents,” Birge says. “Then, we spend the day with family and have lots of great food.”

The Lintners are excited to spend time with their kids during Christmas and, of course, cook on the Traeger grill.

“All of our kids have about three weeks off from school and (oldest son) JC will be home from college,” Lintner says. “We always make it a point to visit the Christmas tree farm, and there’s been talk of fishing, hunting and just hanging around the house together.

“We also have a 23-pound bone-in ribeye to be smoked for Christmas dinner on the Traeger. It’s been aging for almost five weeks, so that should be pretty amazing! We’ll be posting all about it when the day comes around.”

Lintner says that one of his favorite Christmas memories is the huge family Christmas Eve party held at his grandma’s house.

“My mom is one of 12 kids and I’m the oldest of 13 grandkids,” he says. “It was huge. One year at grandma’s house, I got what I had always wanted: a Daiwa Denny Brauer Signature Flippin’ Stick.”

Justin and his wife, Tessa, will be celebrating their last Christmas as a family of two. Their plans involve moving his parents from Mississippi to Florence and getting their house prepared for the addition to the Atkins family: a baby boy. With all of this, they’re still making time for Justin’s favorite Christmas traditions.

Andy Montgomery likes to brag about his close connection to Santa Claus. Montgomery insists that Santa is actually his personal friend that makes a visit to the kids every year.

“I’m close enough to Santa that we can discuss beforehand exactly what his elves can and can’t make!” he says. “Another interesting fact is that Santa is an outdoorsman. Last year, the kids gave Santa four new rod and reel combos and this year he received a nice gift card to Bass Pro/Cabela’s. So if you happen to see Santa in street clothes on the water or in Bass Pro after Christmas, you’re not seeing things. Santa really does love the outdoors.”

Jason and Ashely Lambert mixed things up a little for the holidays this year.

“Our Christmas was very traditional like most,” Lambert says. “Ashley would decorate the house inside and out and it was very festive. This year has been a little different for us as we decided to do some traveling. We sold our home and pretty much everything with it, and have a 43-foot-long fifth wheel that we’re traveling the country in now.

“The month of December we’ve spent in the Florida Keys: no complaints here! But we’ll go back home for Christmas because we have some family traditions we just can’t miss.”

“We have a traditional family Christmas each year here in South Carolina, but then, the day after Christmas, we head to Florida in search of warm weather and to celebrate New Year’s by catching big bass!” Robinson says.

The Howell family loves to pack as much adventure into their Christmas break as possible, but they never forget the true meaning of the holiday.

“There’s probably a three-week period that we’ve gone on Disney cruises, hunting trips, saltwater fishing trips in the gulf, and bass fishing trips at Guntersville,” Howell says. “We typically let the weather dictate which direction we go spontaneously. We don’t like cold weather and we don’t like sitting around. We’ve got so much to be thankful for! We usually do a short trip or two before Christmas, and then we enjoy the big Christmas service at Church of the Highlands in Birmingham on Christmas Eve.”

“Jesus’ birthday is the REAL reason for the season, so we stop and focus on His grace and mercy, and give thanks for another year that He’s blessed us with good health!”

Eating a lot of cookies and having wrapping paper wars is a family tradition in the Lefebre household.

“For Christmas, I usually overdo my cookie consumption, but having gone 100 percent organic everything six months ago will surely put a huge damper on that one,” Lefebre admits. “On a brighter note, I will undoubtedly partake in the sometimes violent throwing of used Christmas wrapper balls, and will most likely be yelled at by my beautiful wife, Anne. But it’s always well worth the wrath, plus I always clean up our mess and fix any lamps that may have broken in the mayhem.”

It turns out, Anne has a tradition of her own.

“My wife dresses our poor dog, Isabella, up differently each Christmas,” Lefebre says. “Well, not sure if it’s ‘officially’ worked its way into an actual tradition yet or not, but lately I seem to look forward to the first dog sighting on Christmas morning. Another tradition I hope I started successfully last Christmas was to go fishing and catch my final fish of the year.”

Dustin Connell says he has a low-key Christmas routine.

“I enjoy time off and spending time with the family,” he reports. “I’m normally fishing a tournament somewhere on New Year’s Day because I have to start the year off right!”

Looking back on childhood Christmases, he says his favorite memory was getting into trouble with his brother.

“I was 12 years old and my brother and I got a go-cart for Christmas,” he says. “Within an hour, we wrecked it and the wheel fell off. I was devastated. But now it’s hilarious!”

For Cody Meyer, Christmas is all about spending time with family and making memories. On Christmas Eve, they’ll attend a church service followed by a big Christmas Eve dinner and Christmas movies.

“Christmas morning is the best, watching our two kids, who are two and four years old, wake up and open their presents that were left under the tree from Santa,” Meyer says. “After that, we spend the day as a family and watch our children play with their new toys and, if the weather is nice, take them fishing like we did last year which we are hoping to make a tradition!”

For New Year’s, the Meyers are planning a trip to McCall, Idaho to visit grandpa and play in the snow. They also plan on visiting the natural hot springs in the area.

Justin Lucas has a new favorite Christmas memory after his son was born.

“My most memorable Christmas was two years ago,” Lucas says. “Our son, Cooper, was one month old. We didn’t have a clue what we were doing as new parents, but it was fun and we had a lot of help from our family around that time. We will never forget it.”