Ice Ice Davey: Lefebre Puts Stress on Ice Thanks to his Chilly Hobby 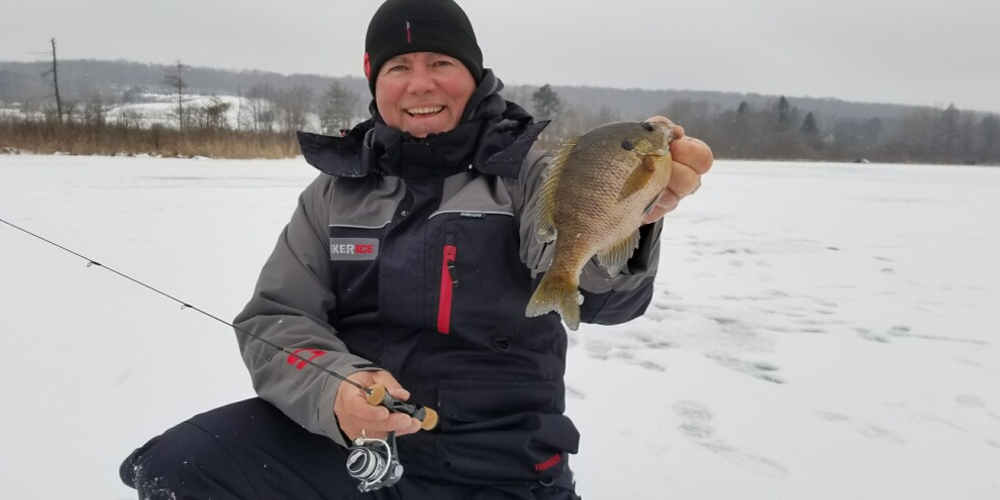 Punxsutawney Phil forecasted an early spring this year, but one Major League Fishing pro is hoping that the world-renowned groundhog is wrong, so he can get in a couple of more weeks of his favorite hobby.

You can find Dave Lefebre on top of the frozen surface of Presque Bay of Lake Erie during the winter months, drilling his way through 5 to 8 inches of ice as he prepares to go lines in. But not for bass, for crappie.

“My dad was always into ice fishing, so I grew up around it,” Lefebre reminisced. “I was out on the ice before I could remember, and I’ve been doing it pretty much all my life.”

While most people are trying to escape the below-freezing temperatures, the Pennsylvania pro packs up his 13 Fishing rods and heads out to Presque Bay. Lefebre’s favorite fish to chase is crappie, be he also won’t turn away perch, walleye, steelhead or bluegill. However, one of his most fond memories involved a record-breaking crappie.

“I caught a world record crappie through the ice at around midnight one time,” Lefebre said. “It was a 3.83-pound black crappie. It was a big fiasco though, because it was the middle of the night and I was calling everyone I knew to wake them up to take pictures at 1 a.m.”

But not all memories are great ones for Lefebre.

Close Call on the Ice

“One of my first memories ice fishing, I was with my dad, uncle and my cousins when I was about 6 years old,” Lefebre recalled. “While we were all fishing, the ice cracked and we all hit the deck immediately. Everyone laid on their bellies so you wouldn’t break through the ice, because it was only about an inch thick where we were. We crawled on our bellies for about 100 yards until we got to the shore and made it to safety. I’m surprised I ever went back after a traumatic experience like that.”

The scary experience couldn’t keep Lefebre away from the ice for long. As his professional tournament career began to take off, he looked for a way to relieve some stress. While some anglers preferred to trade their boat and rod for a tree stand and a rifle, Lefebre turned to his favorite childhood pastime.

“Ice fishing really became like my hunting,” Lefebre explained. “I’m not a big hunter, so it has really been my release. It started as just something fun and non-stressful, and it’s still that way. It’s never been work, it’s just plain fun.”

Soon, the sunshine and warmer temperatures will return, melting away the ice until Old Man Winter returns once again. While the ice will be gone, Lefebre will take some of the lessons he learned there with him on his search for bass on the Bass Pro Tour.

“Ice fishing has really taught me a lot about bass fishing,” Lefebre admitted. “Just the most subtle things like drilling a hole and then drilling another hole 3 feet away. One of those holes you will catch all of the fish and the other one you will catch nothing. That happens all the time in ice fishing and in bass fishing. It showed me how precise you have to be, because it’s a lot tougher to hit these little spots where the fish are on open water.”

Lefebre and the rest of the MLF Bass Pro Tour field will return to open water for the Favorite Fishing Stage Three Presented by Evinrude from Raleigh, North Carolina on March 26.