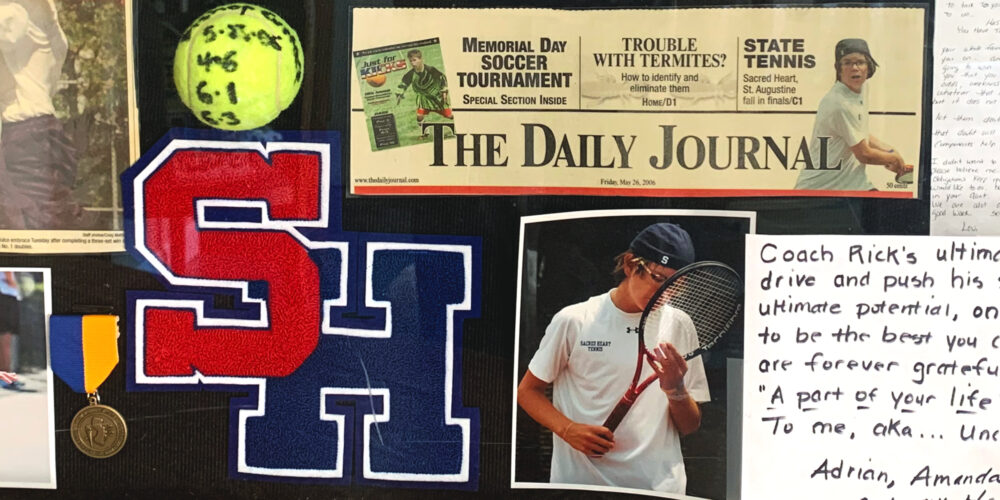 Before becoming professional anglers, some of the MLF pros were hooked on various other sports throughout their high school and college years. In several cases, skills and lessons they learned playing other sports are still helping them in their bass fishing careers to this day.

In a new series, MLF Athletes in Action, we will be diving into the pros’ athletic lives before they became professional bass anglers, and find out why they ultimately chose fishing over every other sport.

It all started when he began playing tennis at 8 years old. His family would take a trip almost every year to attend the U.S. Open Tennis Tournament in New York.

“It’s kind of where the dream of maybe becoming a tennis pro started,” Avena said. “Seeing the pros playing on the big stage and thousands of people watching them … I thought that was pretty cool.”

Over the years, playing tennis just for fun led to Avena realizing his talents on the court.

“At first, playing tennis was just one of those things we did growing up along the shore in the summertime,” Avena said. “Then, I started getting better and I realized there might be an opportunity to play in college.”

Before he reached the collegiate level, Avena was already making waves on the court with his high school tennis team. His team won state and division championships, in one case a memorable moment during his sophomore year.

After two singles matches and two doubles matches, Avena found himself in the position of “tiebreaker”.

“It was tied 2-2 and I was the only one left on the court so everyone there gathered to watch the final match,” Avena recalled.

The match went three full sets, and Avena ended up winning in a tiebreaker.

“That was our first conference championship that the school had won in a really long time. It was probably one of the coolest moments I ever had,” Avena said.

After showcasing his talents in high school, Avena caught the attention of a handful of colleges that offered him scholarships to play tennis for their program. Avena ended up choosing Chestnut Hill College in Philadelphia. It was exactly what he wanted in his college experience since he wasn’t a “big university type of guy.”

“I liked this college because it was just far enough from home, but close enough that you could come home for a weekend,” he said. “I grew up in a smaller town, so that’s what I wanted in my college experience.”

Playing tennis in college helped Avena get involved and meet other people with similar interests.

“I played a sport that I was passionate about amongst other guys that were passionate about it, and naturally they kind of become friends,” Avena said. “I feel like it’s easy to get distracted in college, but playing tennis kind of kept me on a path.”

From the Baseline to a Bass Boat

Avena added bass fishing to his list of serious interests his freshman year.

“It just so happened that the college fishing program started my freshman year and I was able to establish a club while playing college tennis,” Avena said.

Eventually, going to school, playing tennis and participating in his college bass fishing program led to a crossroads in Avena’s schedule.

“My junior year, my coach told me that I needed to pick between bass fishing or tennis, and as you can see it was a pretty easy decision and it ended up working out,” Avena said.

Avena started to get serious about competitive bass fishing his junior year, and went on to fish the FLW Tour his senior year.

The Benefits of Sports

If you watch Avena fish on the Bass Pro Tour, you may notice that he’s ambidextrous, which he credits to his years of playing tennis and the hand-eye coordination associated with the sport. Growing up, his family helped him establish the quick hands he has today.

“My dad was always throwing things at me… not like plates or anything dangerous,” Avena laughed. “I’m talking about balls or crumpled pieces of paper. I was always catching something.

“I’m just as good casting with my right hand as I am my left hand. And I feel like that’s important in bass fishing because it’s all about time and the most casts you make the better your chances are.”

Even though he traded his racket for rods and reels, Avena does get back on the court every once in a while.

“I’m not going to lie, when I told my college coach that I was going to pick bass fishing over tennis, I didn’t touch a racket until a couple years ago, which is a really long time,” Avena said. “I kind of got away from it. I played a few times a couple years ago and it’s like riding a bike, but of course you’re a little rusty and can’t move as well.”

When he’s not fishing or playing tennis, you can find him on a smaller court playing ping pong.

“I’m a really good ping pong player,” Avena jokes. “You can put it out there: I can beat anybody out there in ping pong!”