Poche Banking on Flint River for Championship Saturday on Seminole 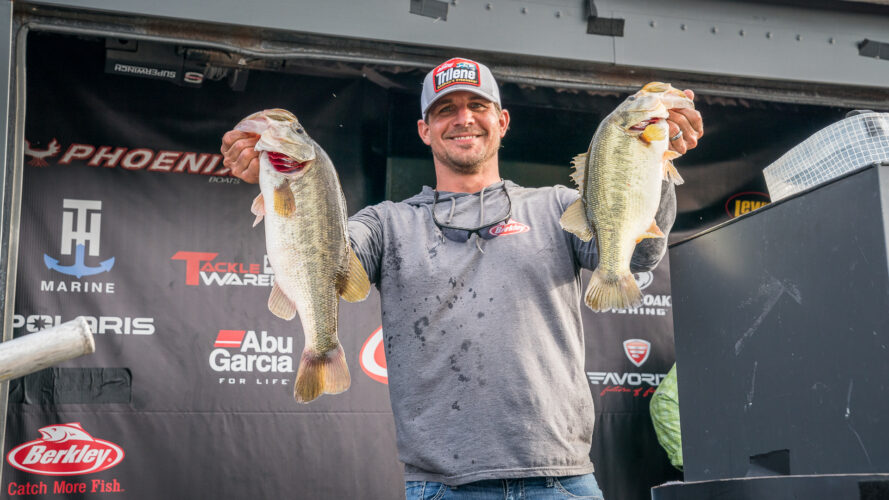 Keith Poche weighed-in a limit of 17 pounds, 14 ounces on day one of the Toyota Series Southern Division event. He has 31 pounds going into the final day, 6-4 out of the lead.
November 7, 2020 • Rachel Dubrovin • Angler News

BAINBRIDGE, Ga. – At the start of this week, MLF pro Keith Poche was “on the fence” about throwing his hat in the ring for the final Toyota Series Southern Division event of the season. Now, after two solid days on Lake Seminole, he’s fishing on Championship Saturday.

Poche lives in Pike Road, Alabama, which is just a couple of hours away from Bainbridge, Georgia, where the tournament is based this week. He says he drove out to take a look at the lake on Monday, signed up Tuesday, and practiced on Wednesday. Come Thursday, day one of the tournament, he caught a limit of 17 pounds, 14 ounces. On day two, he weighed-in a lighter limit of 13-2. Now he’s sitting in fourth place with 31 pounds, 6-4 behind leader Dillon McMillan.

“I like fishing Seminole, I like going up the Flint River. This time of year, you can compete up there,” Poche said.

Poche says that he’s been running about 45 miles up the river to an area that features a lot of rock and shoals. He’s focusing on eddies formed by laydowns, trees and cypress knees. Or in his words, “trash.”

“The fish will sit in that slack water, and I’m just throwing a Berkley Pit Boss, green pumpkin, a 3-inch,” he explained. “Just flipping it up there and trying to cover as much water as I can, and hoping I can get some good bites.”

This week, Poche has been fishing out of a smaller 18-foot aluminum boat with a 90-horsepower Mercury. He says that opens up a lot more options for him, allowing him to access areas that you simply can’t in a fiberglass boat.

For Poche, the benefit of a “little boat” is twofold: He gets to fish the way he likes to fish, and he can set an example for other anglers who may be reluctant to compete because they’re not able to afford a full-sized bass boat.

“I’m trying to encourage people to get out on the water and fish tournaments,” he said. “A lot of people just feel like they can’t get out there and compete because they don’t have the right equipment. But it ain’t about the equipment. It’s about the person, and what you can do as an angler.”

On Championship Saturday, Poche’s plan is to do more of the same: cover water and hope to land five big ones so he has a shot at winning. But he admits it’ll be no easy feat.

You can watch the weigh-in from Lake Seminole live on FLWfishing.com, Saturday at 3 p.m. ET.