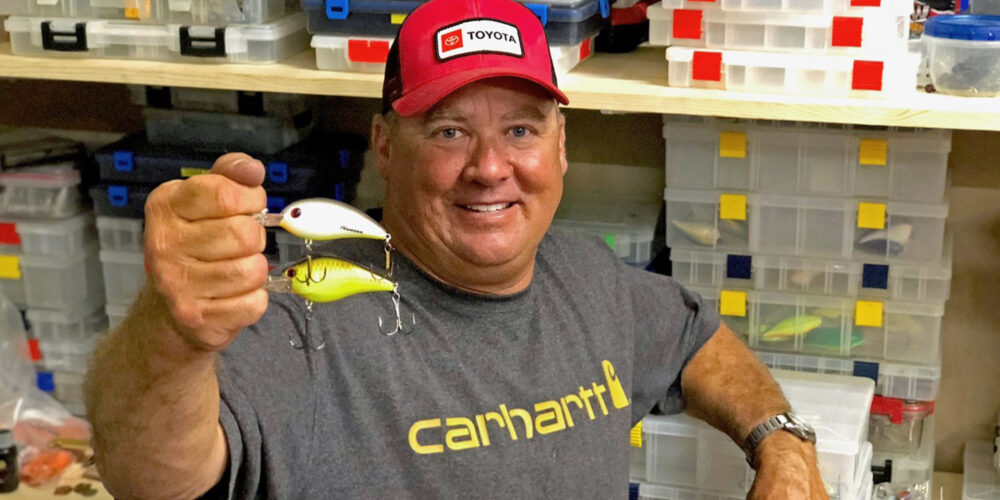 Team Toyota pro Terry Scroggins is using this down time to reorganize the hundred of lures in his shop. Photo by Alan McGuckin
April 26, 2020 • Alan McGuckin • Angler News

To know Terry Scroggins is to realize the man does just about everything in excess. From the size of pork butts and rib eyes he smokes and grills to the amount of tackle he owns, the nickname “Big Show” fits the generous Team Toyota pro perfectly.

Like a lot of anglers, Scroggins has been safely passing time at home during the pandemic by reorganizing tackle. However, the actual lures he’s racking on his recently added garage shelves are likely unrivaled by just about any angler in America in terms of how many he owns, and the uniqueness of each.

“My longtime buddy Dave Dotson is a handyman. He’s the guy I call for help with anything from hooking up a new TV to installing shelves. He tells me the shelf braces he screwed into the studs in my garage can support hundreds of pounds, and I’m dang sure putting them to the test,” grins Scroggins.

Speaking of braces, you might want to brace yourself for Scroggins inventory estimates.

It’s no surprise that soft plastics, many of which he designed the molds for himself, occupy the majority of the weight load. But, are you ready for this? Scroggins guesses he’s got somewhere in the neighborhood of 3,000 crankbaits – and many of those are still in the original package.

“A lot of them are the discontinued Bomber Switchback Shad in a particular color I helped paint on the originals,” says Scroggins, who painted cars in the family auto body business for 16 years before turning pro.

“The Bomber Switchback series dove 8 to 14 feet, and the color I designed had a chartreuse belly with an orange throat and white sides to produce a lot of flash in dark tannic water, or anywhere with a healthy stain to the water,” he explains.

When Scroggins found out the Switchback was never coming back, he gathered up about 500 of them, and much the same can be said for a particular Lucky Craft 2.5 that’s no longer made. He thinks he’s got about 500 of those too and adds the color really doesn’t matter, because he repaints them to his liking anyhow.

Since he purchased the place 13 years ago, Scroggins’ house has been host to darn near every top name pro and service crew mechanic for his famous home-cooked dinners. Heck, during the 2012 Elite Series event in Palatka, Scroggins served up 45 pounds of smoked Boston butt in one night. And in the case of guys like VanDam and Swindle, his centrally located abode between Palatka City Dock and Lake George has been a home-away-from-home during tournament weeks on the St. Johns.

Now, thanks to a very unexpected extensive break in the tournament schedule, it’s also home to one of the most massive, freshly-organized, and hard-to-get bass fishing lure inventories in America.