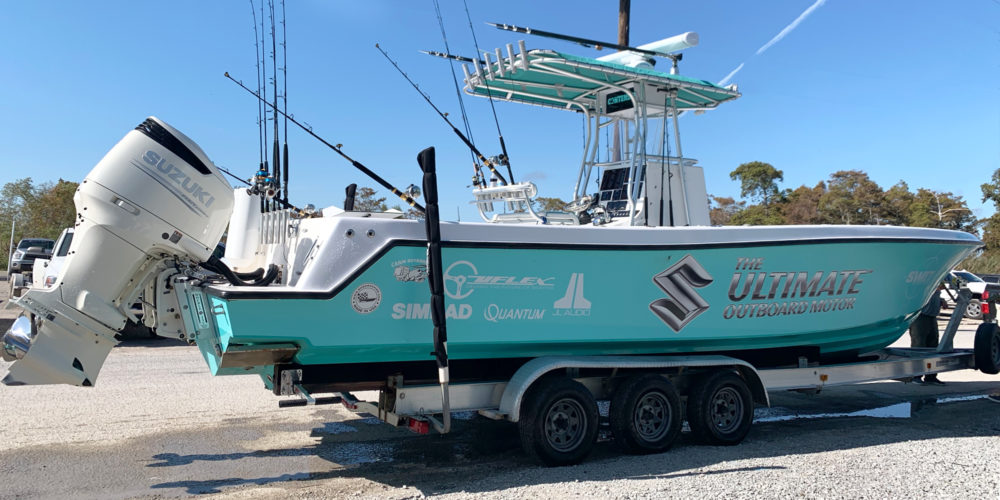 Everyone needs a hobby to pass the time during the Bass Pro Tour offseason, and Gerald Spohrer has found a doozy. Over the past few months as he waited for the 2020 Bass Pro Tour season, Spohrer was elbows deep into rebuilding a 32-foot 2004 Contender saltwater boat.

The Louisiana pro had always wanted a saltwater boat to take out into the Gulf of Mexico, and this summer while at ICAST he found the perfect one.

“I wanted to get kind of an older boat and use all of my sponsors in the business to help me rebuild it,” Spohrer said. “Randall Tharp showed me this 2004 Contender while I was in Florida that was exactly what I was looking for. Rebuilding that boat has really been my full-time job since the season ended.”

The Suzuki pro outfitted his new project with all the bells and whistles he could get his hands on. Two Suzuki 300-horsepower engines on the transom and Lowrance Simrad products all around started to bring this 15-year-old boat into the future. But all of that was the easy part, according to Spohrer. After examining the Contender and seeing some of the flaws, Spohrer knew his work was far from done.

“The hardest part about the project was replacing the fuel tanks,” Spohrer revealed. “These older boats have aluminum fuel tanks in them that pretty much expire over time. There are three tanks that were underneath the floor that you couldn’t get to because they were fiberglassed over. I stripped the boat down completely so I could put new fuel tanks in there, which was pretty difficult and time consuming. In the end, I’m glad I did it because it greatly increased the value of the boat.”

Once the new tanks were in, the Lowrance pro started working on rewiring the entire boat.

“There’s not one original wire in that boat now,” Spohrer said. “All the pumps and fuel lines are new as well with those new fuel tanks. The only thing that’s original on the boat is the hull. The entire process of rebuilding took about four months to complete from start to finish.”

The Right Brakes Tame the Towing

While the rebuilding process was time consuming, none of it would have mattered if Spohrer hadn’t been able to tow his new boat back home to Louisiana from Florida. The heavy vessel was twice the size of his truck, according to Spohrer, but he had plenty of faith in his brakes.

“Anything can pull a big and heavy boat like that forward,” Spohrer explained. “Once you get going, stopping is the main safety concern. That’s why having the right brakes were so important to me. My Power Stop brakes gave me the confidence to be able to stop while towing that big boat, even when I was going 70 mph on the interstate.

“The boat itself didn’t really fit on the trailer that I was towing it on that well. Plus, that trailer had really bad tires, so I just knew that I was going to blow some. To know that I could rely on my brakes to be the one thing in control, it was great having that peace of mind.”

With his saltwater refurbishment venture complete, Spohrer can step back and not only appreciate his new boat, but the journey and hard work it took to get it up and running.

“I’ve never done a project of this magnitude, so when we took the boat out on its maiden voyage the other day I was just happy that everything worked,” Spohrer said with a laugh. “Looking back on it, there was just so much to do and I never really saw the light at the end of the tunnel. It was such a rewarding experience, and I’m glad I did it.”