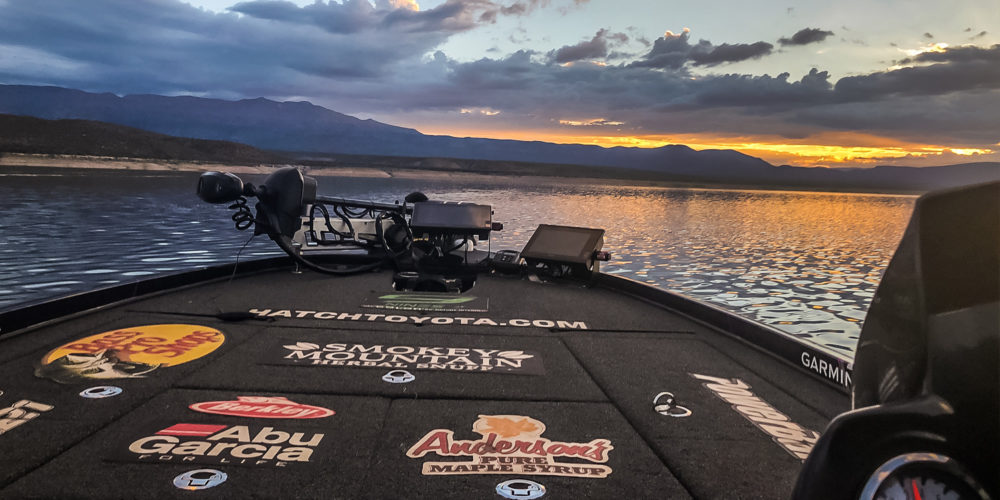 Follow the Salt River from Phoenix, Arizona for about 80 miles to the northeast and you’ll find Theodore Roosevelt Lake, the largest reservoir in the state. There, on one of the many sun-soaked days in Arizona, you will probably find Major League Fishing pro Josh Bertrand plugging away on his favorite lake.

For 18 years, the now 30-year-old Bertrand has fished the waters of the central Arizona lake, and it has always been special to him. The desert is an inhospitable environment for most, but it’s where Bertrand feels right at home.

“I love it because it’s out in the desert and I grew up fishing this lake,” Bertrand said. “I have a lot of memories there. It’s the biggest lake we have in central Arizona and our best tournament lake.”

The Grand Canyon State only sees about 8.04 inches of rainfall per year on average, which does not come as a surprise to most. Because of that limited precipitation, Roosevelt Lake has undergone plenty of changes over the course of Bertrand’s time fishing there.

“What’s cool about it is that it has a lot of water level fluctuation,” Bertrand explained. “Every year it’s like a different lake. One year it’s 50 percent full, the next it’s 80 percent. It’s always changing.”

Bertrand’s fishing career began on Roosevelt during a team tournament he entered with a friend when he was 14 years old.

“It was with about 150 boats and I thought I was fishing the World Championship,” Bertrand said through a chuckle. “I thought it was such a big deal at the time.”

As the years went by and a young Bertrand got more tournaments under his belt, the memories started to stack up. Roosevelt is responsible for some of his favorite moments with friends and family.

“I was fishing in a night tournament there one time and me and my buddy had the biggest bag I ever caught with 34 pounds,” Bertrand recalled. “Another tournament I was with my dad – we struggled all night and didn’t have much in the boat. Then, I’ll never forget, on back-to-back casts we caught an 8.5 and a 10-pounder to win the tournament. I reeled in the 10-pounder and I still don’t know how I got that thing in the boat.”

Like much of the state, Roosevelt Lake is surrounded by desert. There’s not much in terms of vegetation surrounding the water, or in the water iteself, but Bertrand says there is copious amounts of brush. When the water level is high and facilitates more brush in the water, Bertrand knows exactly which bait he reaches for.

“I love to use a crankbait when I’m out there,” Bertrand divulged. “I love deep cranking with a Berkley Dredger 17.5 and a 20.5. It’s also a great flipping lake because of the brush. I do a lot of flipping with a Berkley PowerBait Power Hawg.”

Bertrand thinks one of the greatest characteristics of the lake is the number of quality bass that live there.

“You can always catch them when you go to Roosevelt Lake because it has great numbers of fish,” Bertrand said. “It’s about an hour and a half from my house and I have other lakes closer to me, but I always choose to go to Roosevelt. Even on a slow day, I can catch 15 to 20. On a good day I could catch 50 to 100.”

Bertrand has learned many lessons throughout his years on the desert lake, including one he continues to use to this day on the Bass Pro Tour.

“The lake has really taught me how to target bigger fish because the lake has so many,” Bertand explained. “To catch bigger ones you have to specifically target them out there, and that’s helped me as a professional learn how to get some bigger numbers in the boat, wherever I am.”

As he prepares to head out the North Carolina for Stage Three of the Bass Pro Tour, you can bet that Bertrand will try to spend some quality time on his favorite lake before he heads back east.