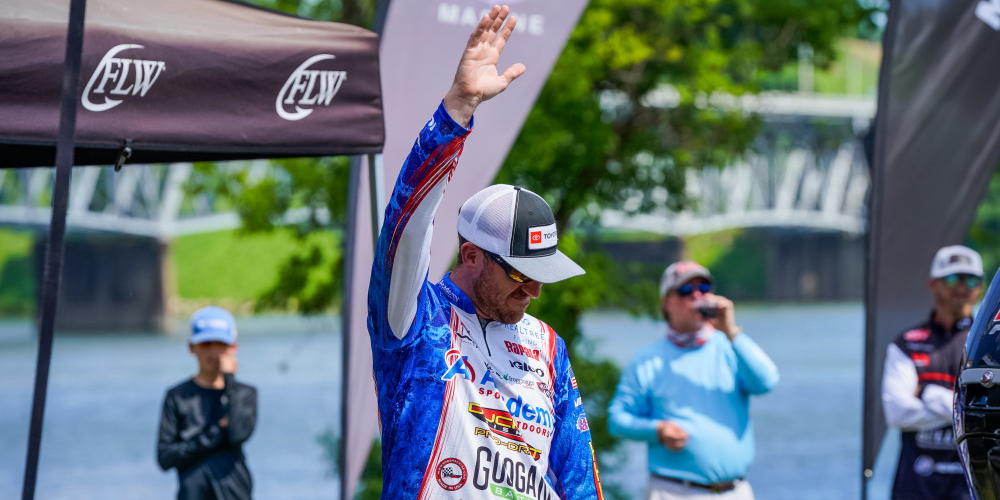 If Toyota pro Jacob Wheeler has proven anything over the course of his bass-fishing career, it’s this: open-mindedness and diversity pay off.

Maybe not every single time, but the astounding Top 5 consistency the Tennessee pro has displayed in his nine-year career (mostly thanks to his ability to assess and adapt) is impossible to argue with.

Wheeler did it yet again Saturday, wrestling the championship trophy away from a Top 10 field of Tennessee River hammers at the Toyota Series Central Division tournament on Pickwick Lake. Wheeler weighed in 17 pounds, 11 ounces for a three-day today of 56-8, comfortably ahead of Buddy Gross (52-0), Michael Bean (49-9), Michael Brewer (48-13) and fellow MLF pro Justin Atkins (48-12).

“It really came down to having multiple places,” said Wheeler, who claimed his first FLW win since he won the Forrest Wood Cup in 2012. “It wasn’t just about trying to find spots that were a little bit out of the way, it was also important to be able to rotate through community holes, and trigger a few fish into biting. There was no ‘glory hole’. I caught them in 10 feet of water and I caught them in 30 – the big thing was keeping an open mind.”

Wheeler left takeoff every morning with 15 to 20 rods on deck and caught fish on several different baits, but relied heavily on two baits: a Rapala DT20 in Carribean Shad and a Googan Baits Mondo Worm.

“That DT20 is a sleeper,” Wheeler said. “It’s a balsa bait, and a balsa bait triggers fish better than any other type of plastic crank, for me. I also went a little old-school with a Mondo Worm and Lunker Log. These fish are tired of the hair jig and this and that – sometimes old-school stuff is the way to go. The key was to be able to pull up on a spot, stop in and make a few casts, and catch a few fish. Each place was so different – one place you’d crack ‘em on a crankbait, the next place on a worm, the next place on a spinnerbait.”

For complete coverage of the Toyota Series, log on to FLWFishing.com.