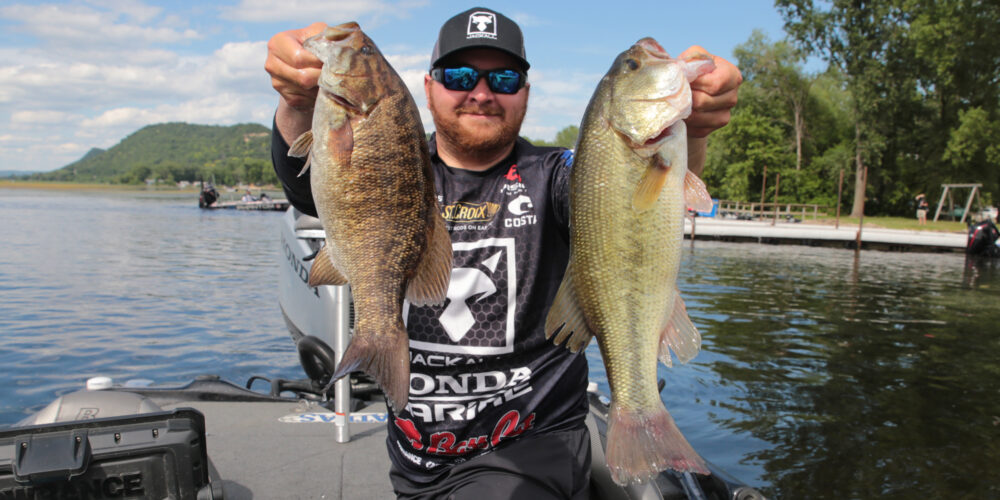 Jesse Wiggins was one of eight MLF pros in the Top 20 after Day 1 on the Upper Mississippi River. Photo by Mason Prince
July 29, 2020 • Mason Prince • Angler News

LA CROSSE, Wi. – After a more than 70-minute fog delay on Wednesday morning, the second FLW Tackle Warehouse Pro Circuit Super Tournament of the year got underway on the Upper Mississippi River. The pre-tournament buzz was that it was tough to get bit in practice, but Day 1 was more productive than expected for many in the field.

Here’s how a handful of MLF anglers anglers fared on Pools 7, 8 and 9 of the Upper Mississippi River.

Jacob Wheeler entered the second Super Tournament with a target on his back after winning the first one of the year on Lake Chickamauga. Wheeler weighed in five bass for 14-14, good enough for second place behind Scott Wiley’s bag of 15-3. Wheeler spent the majority of his day on Pool 8, not really willing to take a chance with the busy locks.

That strategy paid off in a big way for him on Day 1.

“I found the right fish, there just weren’t a lot of them,” Wheeler said. “With that fog delay this morning, I just never felt like I had a long time to fish, that’s why I didn’t want to mess with the locks. I feel good, I just know that I can do better tomorrow hopefully.”

Just a little behind Wheeler in fifth place is Alabama pro Jesse Wiggins. While other anglers were left shaking their heads looking for answers on the dock, Wiggins walked to the weigh-in feeling pretty good thanks to his 14-5 bag.

“It’s tough out there but you can find some good ones,” Wiggins said. “I spent my day up north and it worked out for me. It gave me some confidence heading into the rest of the week for sure.”

Keith Poche ended the day inside the Top 20 with five bass for 13-1. It was a mixed bag that did the trick for Poche today, but the story wasn’t so much how he caught the fish, but what he was fishing out of.

Poche made news to begin the 2020 Bass Pro Tour by announcing that he would be fishing out of an aluminum Triton boat for the year. He didn’t bring that exact boat with him to La Crosse, but it’s still aluminum.

“I got this old boat from my uncle a few years ago and I gutted it all out and re-did it,” Poche explained. “This one is a little lighter and smaller so it’s easier to get around with up here. I’m less likely to get stuck, basically. I’ve won money every time I’ve fished out of this boat so I guess it’s my good luck charm.”

Coverage of Day 2 begins at 7 a.m. CT on FLWfishing.com.