Cane poles on the tailgate 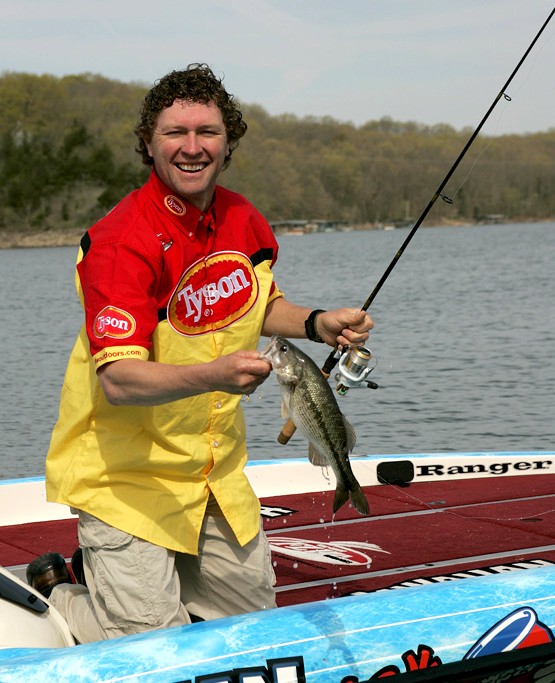 Country music singer and songwriter Craig Morgan lands a bass on Beaver Lake the day of his free concert at the 2005 Wal-Mart Open. Photo by Jason Sealock.
May 19, 2005 • Jennifer Simmons • Archives

In Craig Morgan’s recent No. 1 hit, “That’s What I Love about Sunday,” he waxes nostalgic about taking a walk down a back road with a tackle box and a cane pole. It’s not the first time a Craig Morgan song with a mention of fishing has graced the top five: His 2003 tune “Almost Home” featured a homeless man daydreaming about “cane poles on the tailgate, bobbers blowin’ in the wind.”

Think Craig Morgan likes to fish? He wrote “Almost Home” as well as his latest single, “Redneck Yacht Club,” that even mentions an Evinrude. All those fishing memories that are now manifesting themselves in his songs came from the waters near his hometown of Nashville, Tenn.

Morgan spent a lot of time fishing as a kid, enjoying wetting a line as well as pursuing other outdoor activities, such as hunting. He recalls fond memories of Harpeth River and fishing with a good friend of his in school.

“I had a three-wheeler, and on Fridays after school, we’d hop on that three-wheeler and literally drive into the Harpeth River, fishing,” he said. “But most of my memories come from my 13-year-old son, Kyle. He’ll get up in the morning on his own accord and take off to go fishing.”

View from the top 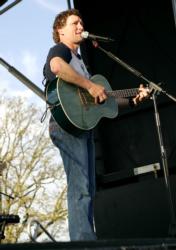 While Morgan may have a long history of outdoor pursuits, his burgeoning career has limited his fishing time in recent years. In 2000, his first major-label project was released by Atlantic Records and produced only modest success. His debut single, “Something to Write Home About,” peaked at No. 48 on the charts, and his follow-up, “Paradise,” fared little better, clocking in at No. 46.

Before Morgan’s recording career had a chance to take off, however, Atlantic closed its doors.

“From the time Atlantic closed and I signed with Broken Bow Records, it was about a year,” Morgan said. “I basically took a year off. I spent a lot of time writing.”

After one underperforming single on Broken Bow, Morgan released “Almost Home,” a moving portrait of a homeless man content to lie in the cold and daydream of days gone by. The song struck a chord with listeners and became the biggest hit of Morgan’s career at that time.

In 2004, his third album, “My Kind of Livin’,” was released, featuring the single “That’s What I Love about Sunday.” Soon enough, Morgan found himself at the top of the charts for the very first time.

“It’s good,” Morgan says of the No. 1 experience. “I don’t feel any different than I did before. The neatest thing is seeing the excitement in everyone else’s eyes.”

A world of experience

The road to the top was a long and winding one for Morgan, paved with once-in-a-lifetime experiences and even near-death situations as a member of the U.S. armed forces. Soon after high school, Morgan left his Nashville home behind and joined the Army, which took him to such far-flung places as Panama and Korea.

“I grew up in Nashville, and my dad was a bass player,” he said. “I just wanted to try and get out of that small town and experience some things. I thought I’d stay a couple of years, but I ended up finishing college in the Army and staying 11 years.”

In Panama, Morgan dealt with the harrowing experience of losing two of his fellow comrades, a situation that prompted him to make an annual trek to the Central American country in their honor. Although his touring schedule has not allowed him to return the last couple of years, he still holds their memory close to his heart.

“I think (the Army) gave me experiences that a lot of people read about,” he said. “It gave me a greater appreciation for the luxuries we have here in America because of the hardships I’ve seen.”

Naturally, though, Morgan always found the time to go fishing no matter where he was stationed. As a result, he has had the opportunity to cast a line in areas of the world most people could only dream of fishing.

“We’d fish off the coast – we’d go out and catch anything we could catch,” he said. “We’d typically catch grouper and those kinds of things. I have fished about everywhere in the world – Alaska, Canada, Panama, Costa Rica.” 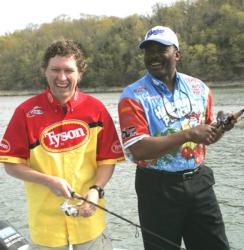 Nevertheless, there are a few things Morgan hasn’t sampled that he’d love to try.

“I see those TV shows where they catch those peacock bass – I’d like to catch one of those,” he said. Then, slapping his hand on the table, he says, “I want to go ice fishing. I’ve never done that. I think that would be such a blast to sit out there in that little box, drink some coffee and fish out of that little hole.”

When Morgan ended his stint in the Army, he left it to pursue his life’s great dream – songwriting. For six months, he says he did nothing but write and play at writers’ nights in the local clubs.

Those odd jobs included working as a sheriff’s deputy in his current place of residence in Dickson, Tenn., as well as a job at the local Wal-Mart.

“I was the dairy manager,” he said.

Somewhere in the middle of stocking the shelves with skim and 2 percent and patrolling the streets of Dickson, Morgan got his big break. He had been recording demos of the songs he had written, which were eventually heard by the top brass at Atlantic Records. They quickly offered him a recording contract. He was an exception to the rule; most singers experience several years’ worth of rejection and heartbreak before finally receiving an offer they can’t refuse.

“Mine was that easy,” he said.

After the major label shut down, Morgan considered offers from other majors before eventually settling on Broken Bow, an independent label based in Nashville. In today’s climate of consolidation and near-monopolies on both the label side and the radio side of the music industry, the career of an independent-label artist is often an uphill battle. Once again, Morgan is the exception.

“I think I’ve made the right decision – we’ve had two top-fives in the last two years,” he said. “Radio believed in me when I wasn’t very popular. For them, (the No. 1 single) is kind of like, `I told you so.'”

True to his roots 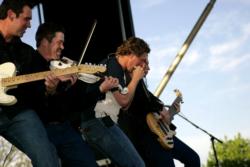 These days, Morgan roams the country in a tour bus, playing to crowds like the one gathered in Rogers, Ark., recently for his concert at the FLW Tour’s Wal-Mart Open. Typically, Morgan performs his show and then rides all night to the next destination, a schedule that sometimes leaves him time for a little fishing and hunting.

“We schedule time,” he said. “Usually the morning before the show, we’ll have four or five hours.”

Morgan and his band and crew also cultivate a passion for motorcycle riding, a pastime helped by their recent purchase of a trailer to cart around their bikes.

“I just love the outdoors,” he said. “I probably spend more time hunting than fishing. It’s all just to be outside. There’s not one aspect of it I don’t enjoy.”

“They’re the closest and the places I’m most familiar with,” he said. “Being a Southerner, (smallmouths) were the big game of fishing.”

He says his favorite lure is probably a spinnerbait or a good rubber worm, but he’s been known to catch his own bait a time or two.

“If I’m fishing the Harpeth River, I’d want a crawdad bait,” he said. “I usually just walk the creek and grab a few.”

Meanwhile, Morgan continues to work on his career and set goals for himself that include platinum records, more No. 1 hits and financial stability. He’s written a new tune called “The Song” that he says is the best he’s ever written.

“It’s kind of a neat deal,” he said. “I’ve written a thousand, probably. Everybody says their best one is their most recent one.”

Morgan also hopes to add to his list of meaningful accomplishments that includes everything from sharing the Grand Ole Opry stage with his idol George Jones to meeting President George W. Bush and performing for the troops. No matter the accolades and accomplishments, though, Craig Morgan just wants to be known as a good guy.

“I’m honest,” he said. “I’m a family man. I believe in God. I support my country. And I’m not going to change. I’m going to be who I am, whether I’m doing this or hanging cabinets for somebody. I’m still the same.”