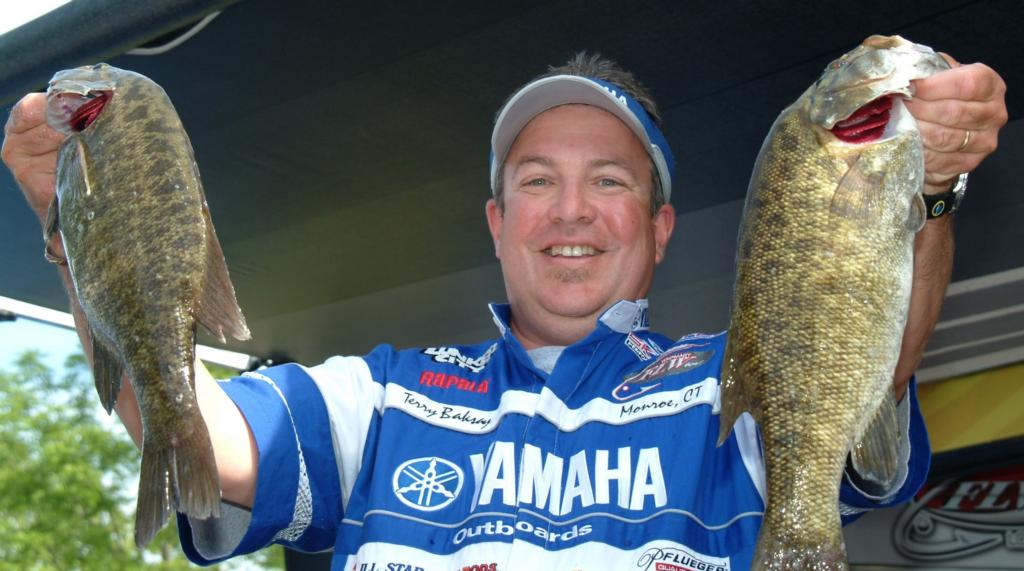 Comebaksay … Comebacks and wipeouts have been dramatic and frequent this week on Lake Cumberland, and today was no exception. The most dramatic comeback tale of the day belonged to pro Terry Baksay, who was the runner-up at the last FLW Series event on Lake Lanier. Baksay caught 1-6 on day one and blanked on day two and was foundering in 186th place when today, he busted the day’s heaviest pro sack weighing 14 pounds, 3 ounces. He jumped from 186th to 72nd, not high enough for a check but certainly high enough to gain a lot of extra points – 72nd awards 129 points, and 186th awards only 15. In addition, Baksay’s day-three co-angler partner was tournament winner David Lawson, who brought in 13-2 today to defeat J.B. King by more than 6 pounds. “I fished the same places I’ve been fishing, but I figured out how the fish wanted to eat the bait and how I needed to position the boat,” Baksay explained. What is even more unbelievable is the fact that Baksay claims he lost seven – yes, seven – big ones today, and he says his weight should have been at least 19 pounds. “This is what I thought I’d catch every day,” Baksay said. He said he didn’t give up on his spot even though it failed him the first two days because he could see the fat ones with his own two eyes. “I was seeing so many fish,” he said of the sweet spot. “They’d swirl at the boat. Today was a hoot. I had a good time.”

Delivering a Surman … Yesterday’s No. 2 pro Clark Wendlandt was one of the first anglers to weigh in today, and he brought in a surprisingly small catch of one bass weighing 1 pound, 15 ounces, quite a drop from his weights of 16-14 and 10-12 on days one and two, respectively. With nearly 200 pros left to weigh in, Wendlandt’s chances of making the finals didn’t seem too hot at the time, but he ended up finishing the day in fifth. However, he is currently more than 5 pounds behind the leader, a fact that doesn’t matter on cut days on the FLW Tour. But on the FLW Series, the winner is determined by the heaviest four-day weight, so Wendlandt’s day-three stumble could cost him. “The disappointing thing is it’s a cumulative-weight tournament, so if I do make the cut, I’ll have a lot of ground to make up,” Wendlandt said as he weighed in. “I had a lot of sight fish today that I just couldn’t catch, and then it started raining.” … Now that Wendlandt is definitely in for tomorrow, he has already started to formulate a plan to get back on top, and that plan involves milking his roommate and good friend Mike Surman, fishing tomorrow from the No. 6 spot. “Mike and I are 7 ounces apart,” Wendlandt said. “I’m going to ask Surman where he’s going tomorrow, and I’m going to go to the same places. So when someone asks, `What is Clark Wendlandt’s plan for tomorrow?’ just say, `He said, “Surman.”‘” Though he’s joking – we think – he might be onto something. Surman caught 7 pounds or so of bass the first two days but busted 14 pounds today to bring in one of the day’s heaviest stringers. Something’s obviously working.

Berry very sleepy … Art Berry is tired. Fishing all day in the rain might make anyone a little drowsy, but Berry did it with only an hour and a half of sleep. Seems he was having some mechanical trouble, and he knew after day two that his rig was not going to be operable for the remainder of the tournament. “I asked on stage yesterday if there was anyone who had a boat I could borrow, and no one came forward,” Berry said. “My brother called – he lives in northern Ohio – and he got off work at 9 o’clock.” Luckily, Berry’s brother had a boat. Unfortunately, northern Ohio isn’t exactly close to Somerset, Ky., and 9 p.m. is a late time to get started. “We each started driving,” Berry said. “We met at about midnight. I got back at 3 o’clock and got up at 4:30.” Complicating matters is that Berry now has to make the four-hour drive to western Kentucky to begin practice for next week’s FLW Tour event on Kentucky Lake, and on top of that, he still doesn’t have his boat fixed. But Berry is nothing if not positive. With bloodshot, sleepy eyes, he said, “We’ll be laughing about this next week.”

Super charity … Woo Daves is one of the well-known pros who signed on to fish the FLW Series this year, and the more tournaments Daves fishes, the better it is for the Super Kids organization. Super Kids are a group of mentally challenged adults in the Hopewell/Petersburg/Richmond areas of Virginia, Daves’ native state. Super Kids is a charity that is close to Daves’ heart, and he gives 10 percent of his earnings at every tournament to the Super Kids. “We’ve been trying to raise them enough money for a home,” Daves said. “We’ve bought them a nice bus so they can go bowling and stuff together.” Daves said that so far, a couple hundred thousand dollars have been raised toward the home. So how did he get involved with this charity? It was more than 10 years ago, and he was introduced to Super Kids by pro Jacob Powroznik’s father. “He and I fished a lot of team tournaments, and he got me involved in it years ago,” Daves said. “We’ve got several corporations involved, and a lot of fishermen, like Stacey King, Lendell Martin Jr. and Charlie Ingram, have helped out.” If you’d like to help out Daves’ Super Kids, you can log onto his Web site at woodaves.com and click on Contact Woo, and he’ll be glad to tell you all about it.

Hit the road, Jacques … After posting zeroes on both days one and two, co-angler Jacques Fleischmann would have been lucky just to catch some fish and get on the board for some points today. Instead, he brought in the tournament’s heaviest co-angler stringer so far, four bass weighing 14 pounds, 5 ounces, to nearly win the tournament. In the end, it was Lawson who took the crown, but needless to say, Fleischmann is still thrilled with his third-place finish. After all, third is a long, long way from last. “I wanted to go to bed early,” Fleischmann said of how he felt last night. Today, he might just want to stay up all night celebrating. “The area I went to today, I was drop-shotting,” he explained. “The first two days, we were fishing too close to the bank to drop-shot. This is fantastic.” For Fleischmann, the $9,000 payday was worth it all, even though he didn’t add a win to his resume. “As long as I’m in the money, I’m happy,” he said.

7-11: Pounds and ounces separating Hoernke and No. 10 Luke Clausen.

3: Number of days that the big bass caught by pro Mark Rose and co-angler Mike Miller held up. Rose and Miller caught their big bass, weighing 6-0 and 5-5, respectively, on day one and went uncontested the next two days to take the big-bass awards for the tournament.

6-5: Margin of victory, in pounds and ounces, of Lawson over King.

3: Number of top 10 co-anglers who zeroed at least one of the three days of co-angler competition.

“I say when they throw dirt on his face.” – Pro Dion Hibdon, on what he says when asked when his father Guido will retire. Lake Cumberland gave Guido Hibdon one of his best finishes in a while – 15th, worth $12,500.

“I had 40 bass come up and look at my bait today. It was just frustrating.” – Pro Mark Davis, who nevertheless caught more than 8 pounds today and finished the tournament in 23rd, a position worth $11,500.

“I’ve already caught about 22 pounds more than I thought I would.” – Daves, who ended the tournament in 18th with a three-day catch of 24-13.

“If the guy in the Hostess truck doesn’t move, I’m going to steal every freaking Twinkie he’s got.” – Co-angler Nick Hamra, who was blocked in with a serious need to hit the highway.