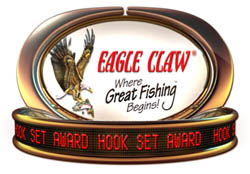 Second-year FLW Tour pro Kevin Long paved the way to his first Forrest Wood Cup appearance in 2007 with several top-50 finishes. But the rubber really met the road at the Detroit River, the final stop of the tour’s regular season, where Long fished his way to a runner-up finish. One of his finest hookups from that event was captured on video, and fishing fans overwhelmingly voted him winner of the Eagle Claw Hook Set Award for the Detroit River tournament.

The pro from Berkley, Mich., more than doubled his career earnings at the Detroit River, and the Eagle Claw Hook Set Award caps off his finest bass-fishing season with FLW Outdoors to date.

Long’s runner-up status didn’t deter visitors to FLWOutdoors.com from anointing him hook-set king at the Detroit River even though his video went up against that of tournament winner Steve Clapper and 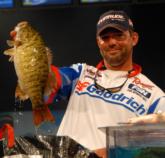 FLW Tour veteran Terry Baksay. In fact, Long’s footage reeled in three times as many votes as that of either of his fellow competitors, easily granting him the Hook Set Award. Those casting online ballots in the contest made Long the winner after viewing fishing footage from the event that appeared both on the “FLW Outdoors” TV show on FSN (Fox Sports Net) as well as at FLWOutdoors.com. For his impressive hook set, Long earned a $500 Wal-Mart shopping card.

Eagle Claw Hook Set Award voters were able to choose from video footage of three pro anglers’ hook sets as captured by camera crews during the July 12-15 FLW Tour event on the Detroit River and lakes Erie and St. Clair near Detroit. The contest and award are presented by Eagle Claw. The online polls are now open for the Forrest Wood Cup; click the following link to visit the Eagle Claw Hook Set Award page, watch video footage of pros David Dudley, Scott Suggs and Clark Wendlandt, and then vote for your favorite.

FSN provides FLWOutdoors.com with video footage of three of the best hook sets from each FLW Tour event throughout the season. The hook sets are seen on FSN’s “FLW Outdoors” program, which airs Sundays at 11 a.m. Eastern, and are then viewable at FLWOutdoors.com. After voting has closed for a given contest, the winner will be announced on television and through this Web site.