Going big with a spinning rod 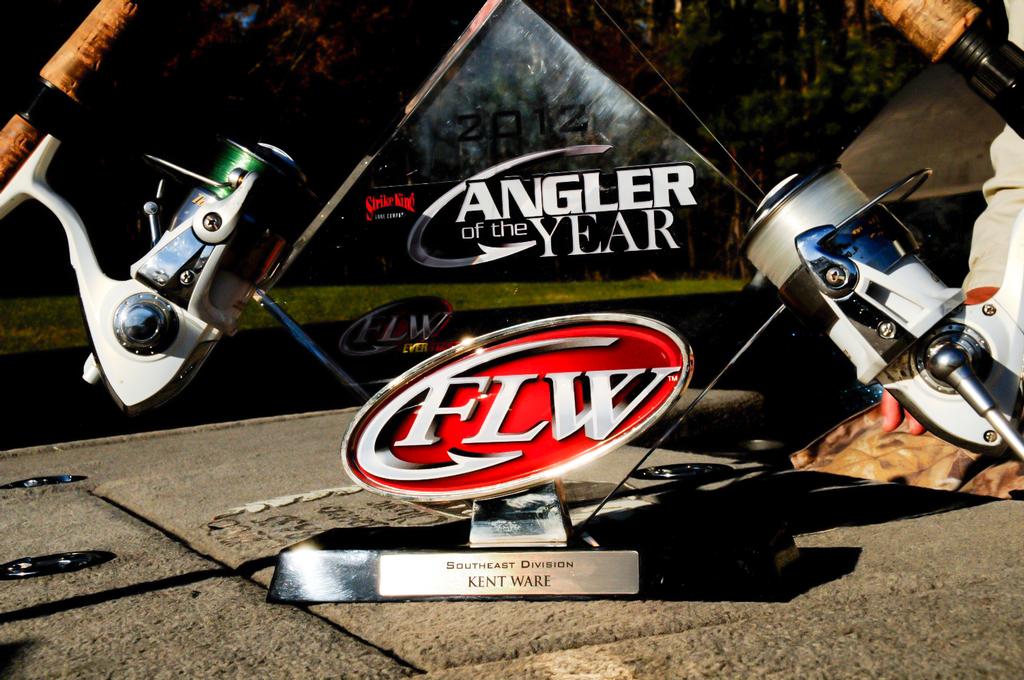 Apparently Kent Ware of Wadmalaw Island, S.C., did not get the memo on spinning rods from the Department of Conventional Spinning Tackle. The lures on Ware’s spinning rods defy the norm: big tungsten weights made for punching thick vegetation; hollow-bodied floating frogs known for catching big bass; flipping jigs for gnarly brush; and even Z-Man Original ChatterBaits.

To hear of such power baits on spinning gear might make a few baitcasting purists laugh. But before you chuckle too much, consider that Ware won the Rayovac FLW Series Southeast Division Angler of the Year in 2012 when the Series visited Okeechobee, Seminole, Santee Cooper and Guntersville. In that same season he finished runner-up in the Rayovac FLW Series Championship on the Ouachita River. In the last three seasons, Ware has scored five top-10s (out of 11 events), and collected roughly $50,000 in winnings 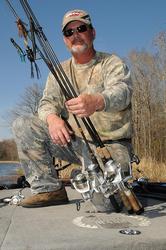 That all might not sound like a big deal until it’s revealed that he has done it all with a spinning rod in the ultra-competitive Southeast Division where casting tackle is considered the norm.

In essence, Ware has shattered the convention that big baits and big line can only be fished on casting equipment. He regularly fishes big “bubba-style” lures on spinning rods by basically beefing up all his equipment to 7-foot, heavy-action rods, 50-plus-pound test braid and large 4000 size spinning reels.

Ware has nothing against baitcasters. In fact, he owns a few casting reels but he simply doesn’t get the time on the water needed to stay target sharp with casting equipment. He relegates his casting gear for straight-up cast-and-reel techniques that don’t involve specific targets, such as lipless crankbaits over submerged grass. If the technique requires any kind of accuracy, Ware reaches only for a spinning rod.

“I want to make Bryan Thrift-like presentations with my lures, but I simply do not spend near the number of days on the water to stay in that kind of rhythm with casting equipment,” Ware says. “For that reason, I’m far more comfortable and efficient with spinning tackle. I can establish an accurate rhythm with it quickly.” 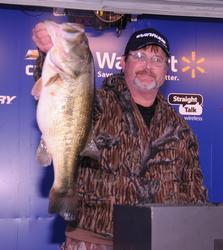 “I don’t get to fish very much between tournaments,” Ware says. “When I hit the water for practice, I’ve got to put baits right where I want them and I can do that with spinning tackle. Even if I haven’t made a cast for three months, I can pick up a spinning rod and start putting baits right where I want them. It takes me a day or two to get into that kind of rhythm with a casting rod and I simply don’t have that much time to waste.” 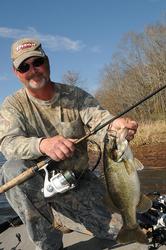 from 40- to 80-pound braid, depending on the technique. Also, he never uses a fluorocarbon leader. In fact, Ware never uses fluorocarbon at all. His version of spinning “finesse” is dropping down to 17-pound-test Berkley Trilene XL monofilament.

As for not using fluorocarbon, Ware says in his opinion it’s simply not applicable on spinning rods beyond 12-pound test because it’s too coily and wiry when compared to mono or braid in heavier pound tests.

“Light fluorocarbons of 10-pound test or less are fine on a spinning rod, but that’s not the way I prefer to fish,” he adds. “I like big baits on big line and they work great on big spinning rods and reels.”

Ware says the critical part of making big baits and big line work on spinning gear is using a big spinning reel in a 4000 size or bigger. The Cabela’s reels he uses are no longer made, so he is currently 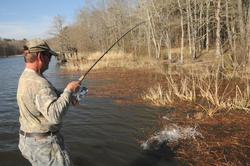 experimenting with other reel brands. But no matter the brand, Ware suggests the 4000 size is best (some reel companies designate this similar size as a size “40”)

“The bigger the diameter of the reel spool, the easier the line feathers off the reel,” Ware says. “Even 80-pound-test braid just floats off a 4000 size reel. You simply can’t use little 2000 or 3000 size reels for these bigger line techniques. The spool is too small and the line is wound too tight for its size, causing problems.”

Some of the big-line techniques Ware performs on his spinning rods are impressive. For instance, punching the thickest matted vegetation is not a problem for him. He takes a rod with 80-pound test PowerPro, threads a big tungsten weight on the braid, ties on a 4/0 Gamakatsu straight shank flipping hook, adds a craw or beaver-style punching bait and goes to work.

“I can get away with a lighter weight when punching with a spinning rod,” Ware reveals. “I’m a firm believer that the lighter the weight, the more bites you get and the better the hookup ratio. In mats where it takes a 1 1/4- or 1 1/2-ounce weight to get through with a casting rod, I can get through with just an ounce or even a 3/4-ounce on the spinner – the difference is amazing.”

Another surprising technique Ware employs effortlessly on the 7-foot, heavy-action IMX spinning rod is a hollow-body topwater frog. He will go as heavy as 80-pound test on the frog as well.

If skipping the frog under bushes and trees is in order, he will drop back to a 6-foot heavy action rod. 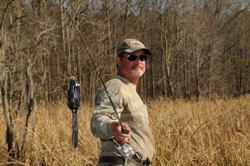 “The places you can skip that frog on that shorter rod with a big spinning reel is incredible,” Ware says. “Way up under shallow docks, around behind trees, through holes in bushes – it’s just a blast to fish that way. In tournaments I’ll catch bass in places where it’s nearly impossible to get a lure. Those fish are there for a reason and I love figuring out how to get a lure to them.”

Other money lures on the big spinner for Ware include a Yamamoto Senko and an Eakins finesse flipping jig.

The Senko is rigged weightless on a 7-foot medium-heavy action IMX with 17-pound-test Trilene XL on a 4/0 EWG style hook.

Ware will also use the 17-pound test Trilene XL teamed with the 7-foot, medium-heavy IMX for the Eakins finesse jigs when fishing docks in clearer, deeper water but will beef up to as much as an 80-pound-test braid on the 7-foot, heavy-action rod if faced with skipping and pitching thick bushes in stained or dirty water.

“To me, there is an added bonus to those two lures (Senko and a jig) on a spinning outfit,” Ware says. “Not only can I skip them into tiny places, but spinning reels, by their nature, throw a lot of slack out with the lure, allowing it to sink immediately and freely. By comparison, a casting reel does not throw slack with the lure, so as soon as the lure hits the water, it’s on a taught line, which encumbers its initial fall. The way a lure falls on a spinning rod is very different than the way it falls on a casting rod – especially a Senko.

So far, Ware has not found a lure he can’t incorporate into his big spinning rod program. At the Rayovac FLW Series Championship on the Ouachita River in 2012, Ware found it necessary to skip ChatterBaits way back underneath pier walkways to get better quality bites. For that application he used the 17-pound-test Berkley Trilene monofilament on his oversized spinning reels to finish second. 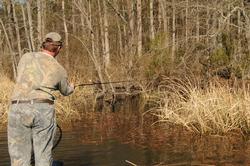 “That’s what I am always searching for in tournaments,” Ware explains. “I am looking for those little nooks and crannies that other anglers are not going to take the time to access. No matter if it’s way back under docks, far back into the bushes, shooting little gaps in reed clumps to hit the water behind them, skipping to the tree that’s behind the tree that’s behind another tree – those are the single-cast shots I love to make and the only way I can do it accurately and efficiently is with a spinning rod.”