Pros share what they’re thankful for this holiday season 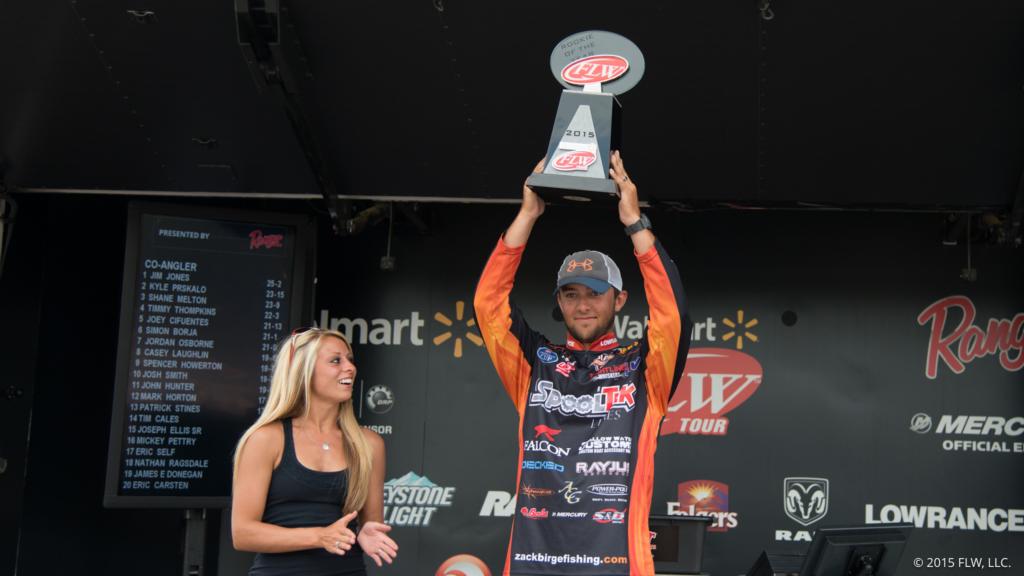 Brad Knight putting together a near-perfect tournament to claim the 2015 Forrest Wood Cup.

Scott Martin seemingly coming out of nowhere to win what is arguably the most difficult title to attain: the Walmart FLW Tour Angler of the Year.

A number of pros have reasons to be grateful this Thanksgiving holiday as they contemplate the season behind them and what they managed to accomplish. Yet there are others who didn’t make quite as many ripples in the tournament waters this year, but nevertheless have cause to celebrate and look to the future.

Here are a few we managed to round up:

In 2014, at the tender age of 23, Zack Birge won the Rayovac FLW Series Championship and then switched over to the Walmart FLW Tour. His first goal there was to win the 2015 Rookie of the Year title. He did that with room to spare, and along the way made a serious run at the Angler of the Year crown and finished eighth in the Forrest Wood Cup. Not bad for a rookie.

“It was a great start to what hopefully will be a long career,” says the Oklahoma pro. “I set out [on the Tour] wanting to do my best, and being Rookie of the Year was my No. 1 goal. A fisherman only gets once chance to win it.”

Mission accomplished. So what’s next? Birge has set his sights on the 2016 AOY title, and, as his FLW Series and Tour performances indicate, it’s not a long shot. In the immediate future, however, Birge plans to spend some quality family time in Blanchard, Okla., and do the usual Thanksgiving stuff: eat, talk, nap, hunt ducks, eat, watch football games, talk, eat some more.

The family got good news just in time for Thanksgiving, however, as Jill was pronounced free of the disease.

“She’s doing awesome,” says Meninger of his sister. “She had reconstructive surgery that went on for 13 hours, and she came through it fine. Now she’ll recuperate for several more weeks, but everything is looking good.

As he promised earlier this year, Meninger donated $8,000 in winnings from his 2015 Tour performances to the Young Women’s Breast Cancer Translational Program at the University of Colorado Cancer Center on his sister’s behalf. Through the Zucker Family Foundation philanthropic trust, Jonathan Zucker of Z-Man donated another $2,000 to the cause, bringing the total to $10,000. 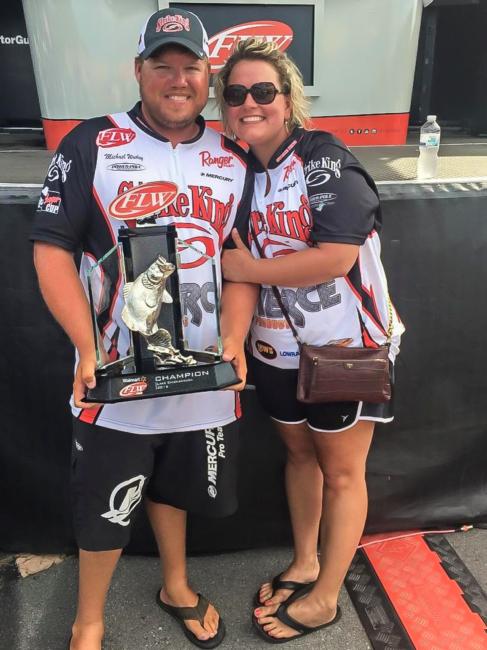 A walk down the aisle is in the future for FLW Tour pro Michael Wooley, and he’s thankful for finding his life partner. The Tennessee pro popped the question to his girlfriend, Brittany McCoy, recently, and she accepted. The pair will be married next August, two weeks after the 2016 Forrest Wood Cup.

The couple met a few years ago when, after a morning of fishing on Pickwick Lake, Wooley stopped to get a bite at the restaurant where Brittany works. After they return from their honeymoon, which hopefully will be funded by a big check earned at the Cup, the Wooleys will reside in Booneville, Miss.

“Booneville is about 30 minutes from Pickwick,” says Wooley. “That’s where Brittany’s family is, and so we’ll be travelling between there and Collierville, where my folks are, on Thanksgiving.”

The Pitter Patter of Little Feet 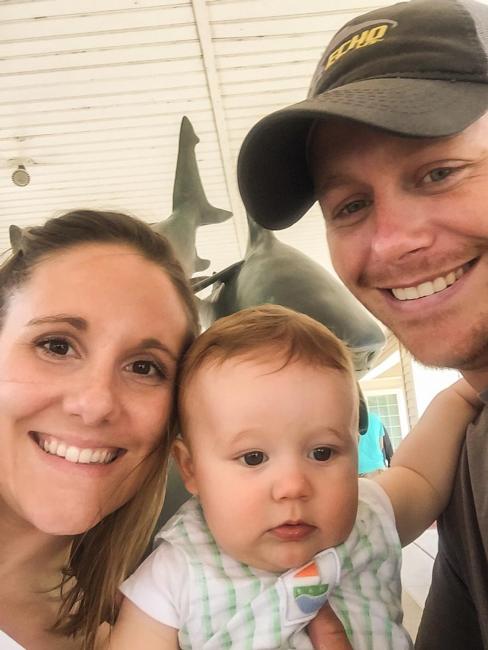 Tour pro Andrew Upshaw and his wife, Valerie, give thanks for their son, Cain, who’ll observe his first Thanksgiving this year. Cain walked by himself for the first time Nov. 18, which is good progress for a baby born on Dec. 22 last year.

As for their Thanksgiving plans, turkey and dressing aren’t the only things on the menu.

“We’ll be doing the usual things – eating too much food, visiting with family and friends we haven’t seen in a while, and doing some shopping,” says Upshaw, who was recently featured in TulsaPeople magazine. “I miss so many holidays and birthdays travelling and fishing that any time I get to stay home for Thanksgiving is really nice. There’s no place like home for the holidays or any other time.”

Thanksgiving also will be relaxful for Dustin Grice and his wife, Jenna. On April 19, just before the Beaver Lake event got underway, Jenna delivered their son, Asher.

“I went straight from the hospital to the tournament,” recalls Dustin, a second-year pro who lives with his family near Waco, Texas. “I didn’t have time to practice and didn’t do so hot in the tournament, but I was too excited about Asher to care.

“He’s been the best thing to ever happen and put everything in a different perspective for me. He helped me understand that there were some things that I thought were important before that weren’t really so important, and that your family is everything.”

Rejoicing for a Great Season

As Jayme Rampey can attest, his road companion, Brandon Cobb, qualifies as a good breakfast and supper cook. Now Cobb will tackle a Thanksgiving meal and prepare roast turkey with all the trimmings for his mother’s family. Perhaps while he’s working his magic in the kitchen, Cobb will reflect on his stellar second year as an FLW Tour pro: finishing 17th in the AOY running and third in the 2015 Forrest Wood Cup – his first appearance there.

“My career is progressing well, and I couldn’t have done it without having my family behind me all the way,” says Cobb, a former Clemson University team angler. “My whole support group, including my sponsors and friends, has helped make it possible. So I’m especially grateful after the year I’ve had.” 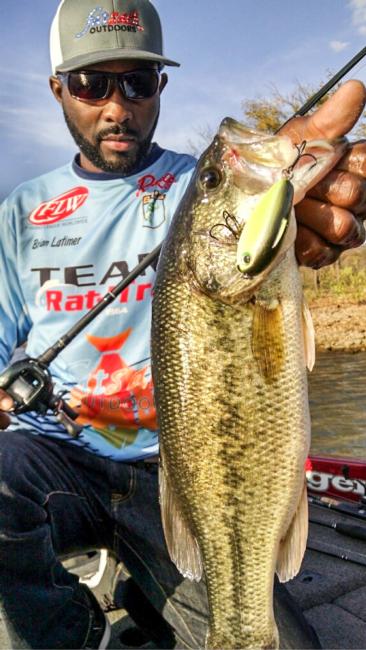 South Carolina pro Brian Latimer will move from the Rayovac FLW Series Southeastern Division to his inaugural season on the Walmart FLW Tour. He could speak for most young anglers who are embarking on a new adventure in 2016 and beginning their pro careers in earnest.

“I’m thankful most of all that God gave me an optimistic outlook on my future,” says Latimer. “I never had the support to pursue my goals financially or morally until recently. I just figured it would all iron itself out somehow, even though I sat on the sidelines for years watching my peers move on. Next year will be my rookie season on Tour despite countless setbacks. I’m most thankful for the hope I feel.”

South Florida pro John Cox has a number of loyal sponsors, but perhaps his pal Bill Taylor is the staunchest of the lot. No, not that Bill Taylor – the Dr. Bill Taylor who owns River of Life Osteopathic in Ocoee, Fla.

“I’m thankful for all my sponsors, but especially Billy because we’ve been good friends since I was about 16 years old,” says Cox, who came within a gnat’s eyelash of winning the 2015 AOY title. “He staked me when I was just starting out and didn’t have enough money to pay a tournament deposit. Unless he’s awfully lucky, it’s hard for a young pro to get going without somebody like Billy standing behind him. He’s always been there for me.”