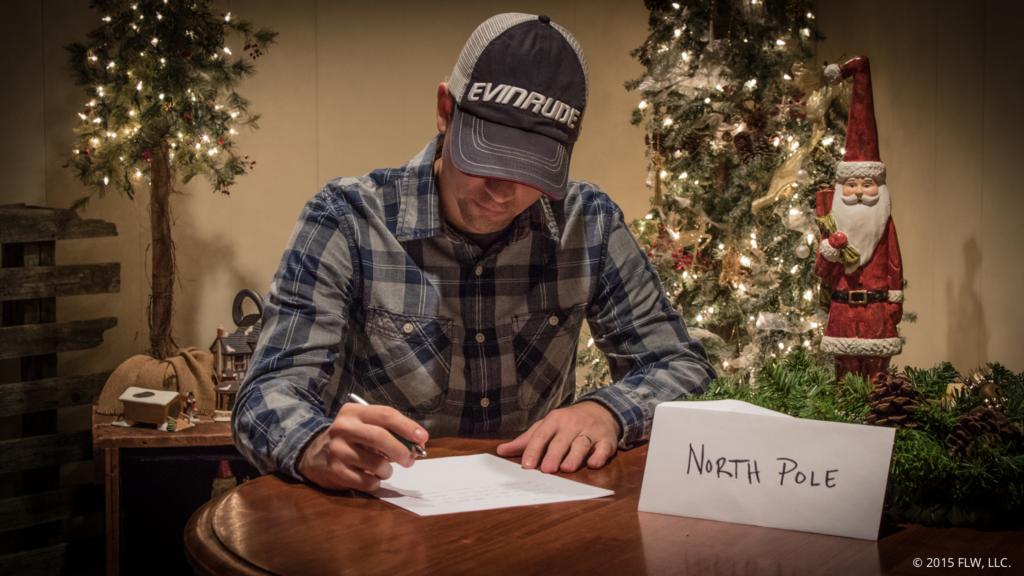 Whether they’ve been naughty or nice, every pro fisherman has a wish list for Christmas. We surveyed a few to determine what they hoped to find under the tree – at least figuratively speaking. Here’s what they had to say:

Brad Knight: What does a guy who won the Forrest Wood Cup in 2015 want in the way of fishing treats that he hasn’t already got? Not much, but with one eye on the thermometer in east Tennessee, and the other on the upcoming 2016 Walmart FLW Tour campaign, Knight still has something in mind.

“I want good weather at Okeechobee,” says the Tennessee pro of the first Tour stop in February. “All I want to do is be able to fish wearing a T-shirt and shorts.”

Charlie Ingram: Ingram is one of those guys likely to be found in a tree stand somewhere if he’s not in a bass boat. It figures his gift idea would be something associated with his favorite winter sport.

“I’d like a battery-operated OZonics scent eliminator to kill my scent when I go deer hunting,” says Ingram. “It’s pretty expensive, but it works. I just wish I’d had one starting about 30 years and 200 deer ago.”

Greg Bohannan: Déjà vu is on the Christmas list for the Arkansas angler, who spends time with his family in Florida each year – usually so he can sample the lake where the Walmart FLW Tour season opener will take place in the coming year. In 2016, that would be Okeechobee.

“I want a do-over of the 2014 Okeechobee tournament,” he says. “I don’t mean it in the sense of going back and correcting something I did wrong, but just experiencing the type of incredible fishing I had there. I caught over 82 pounds and finished second to Brett Hite. What was amazing to me is that I caught all my fish on top with a Gambler Big EZ and saw every one of them when they took it. Of course, I would like to finish one place higher than I did then.”

Bryan Thrift: This North Carolina pro is another FLW angler who can count many more blessing than setbacks. As the Thrift family of Bryan, Allison and son Wylie enter the Christmas holidays, they look forward to occupying a new home in April. Like their current home, where Allison and Bryan began their life together, their next house is being built in Shelby. This time, Wylie will be there to help make the new home brighter.

“I just want the weather to cooperate so that we can get the house built and move in,” Bryan says. “Everything is chugging right along, and there haven’t been any glitches, but it’s getting close enough to being finished that we’re getting anxious and wanting it to be done.”

John Cox: The Florida angler came within an eyelash of winning the Angler of the Year title in 2015, only to fall short in the last tournament of the season on the Potomac River. By that time, it had boiled down to a race between Cox and Bryan Thrift, but it was Scott Martin who had the final say-so as he claimed the crown for himself. Cox wound up second. Coming so close, yet faltering at the end, still haunts him. He remembers the instant when the AOY slipped from his grasp and wants another chance at it.

“Can my Christmas present be retroactive? I want the 3 1/2-pounder my co-angler caught on the second day at the Potomac and have it count in the final standings,” Cox jokes. “Heck, I barely caught any fish over 2 pounds in the tournament, but on that last day I needed a little over 2 pounds to move from 42nd into 20th. Being able to fish that third day would have done it for me. So if I can’t have that good kicker for Christmas, I want an Angler of the Year trophy. Wait til next year, right?”

Mark Rose: One of the stalwarts of the Tour for many years, Rose has commanded the respect of his peers and fans on and off the water because of his fishing skill, sportsmanship and ethics. Typically, his Christmas gift list first and foremost includes his family.

“All my life I’ve been blessed to have more than I ever deserved. As far as material things, there’s nothing I need that I don’t already have. I want all the best for my wife and my two girls, and for them to be safe and happy in the coming year.” Rose says. “The only thing for me that I wish I had is a private crappie lake, but I don’t know that I’m ever going to get that.”

Dan Morehead: Christmas week found the Paducah angler and his family enjoying some R&R at Branson, Mo., and Table Rock Lake prior to returning home for the holidays. When considering the perfect Christmas gift for himself, Morehead was in a reminiscent mood regarding his stellar career as an FLW pro. Although he’s accomplished much, he still has one mountain he’d like to climb – with or without Santa’s help.

“I want to win the Forrest Wood Cup; I want to stand up there and lift that Cup above my head,” Morehead says. “That would definitely be the icing on the cake of my career. I finished seventh in 1999 at Fort Gibson [Lake], but that’s as close as I’ve come – so far.”