How the Walmart FLW Tour Works 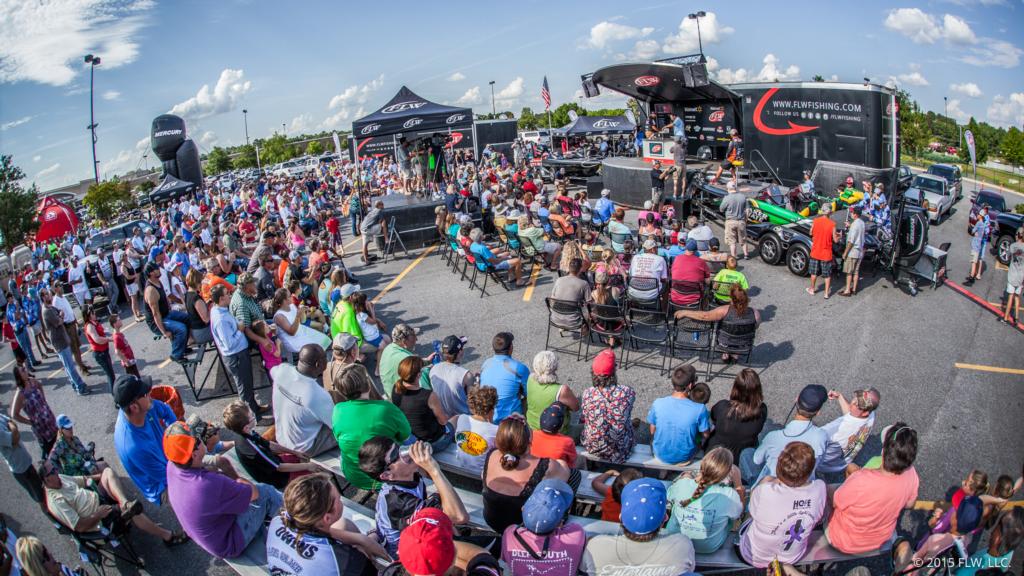 Eufaula, Ala., showed out for a dramatic final weigh-in. Photo by Jody White.
January 8, 2016 • MLF • Archives

The Walmart FLW Tour’s 171 pros represent the top anglers in the sport of tournament fishing, and they’ll compete for millions in prize money over the course of the 2016 season.

Follow along as they pursue their dreams in the richest series of them all. But to be an ultimate fan of the Tour, you first must understand how the competition works.

The heart of the FLW Tour is the six-tournament regular-season schedule, which is as follows:

Competition Format: FLW Tour events last four days. All 171 pros will fish the first two days. Pros run the boat and choose the fishing locations, but each is paired with a co-angler partner who fishes from the back of the boat and competes only against other co-anglers.

Each pro and co-angler can bring five fish to the scale per day, and the weights of each from days one and two are combined. The co-angler competition ends after two days, and the co-angler with the heaviest two-day total wins a new Ranger bass boat. On the pro side, the top 20 after two days qualify to fish on Saturday. Saturday’s weights are added to the weights from days one and two, and the top 10 pros after three days get to fish the final day on Sunday. The heaviest four-day total weight wins.

The top prize at Tour events is $100,000, with a possible bonus of $25,000 to pros who participate in the Ranger Cup contingency program. FLW pays prize money to the top 50 pro finishers. For every additional angler beyond 160 in the field, FLW pays an additional $4,000 prize to the next-highest-finishing boater below 50th place.

Championship Qualification: To qualify for the Forrest Wood Cup, which is FLW’s championship event, pros earn points at each regular-season tournament. First place earns 200 points, second earns 199, and on down the list. The 35 pros with the most points at the end of the season qualify for the Cup.

Angler of the Year: In addition to Cup qualification, the season-long point standings also determine the Angler of the Year, which is the person with the most points after six events. The AOY earns $100,000, plus entry into the 2017 Forrest Wood Cup.

The Co-angler of the Year is determined in the same manner through the season-long point standings. FLW awards a Ranger Z518C with a 200-hp Mercury or Evinrude outboard to the COY, and the rest of the top 10 finishers earn cash prizes.

Held on Wheeler Lake in Huntsville, Ala., Aug. 4-7, the Forrest Wood Cup is the richest championship in bass fishing. Not only do the top pros from the Walmart FLW Tour get to fish, but FLW also invites the champions from its affiliated circuits. Here’s how the field is composed:

10 – The top anglers from the 2015 FLW Series Championship

1 – One member of the 2016 FLW College Fishing National Championship-winning two-man team, as determined by a fish-off

Format: The format for the Forrest Wood Cup is the same as regular-season Tour events, except it’s a pro-only tournament. Pros will be paired with observers and media members for four days of competition. Another unique feature is that every angler in the field earns a check, and there is no entry fee. The winner earns $300,000.

New for 2016, a pair of Walmart FLW Tour Invitational tournaments will be held in the fall. They feature a reduced field size, pro-only format and six-figure payouts, as well as Forrest Wood Cup implications. The schedule:

Qualification: As the name suggests, the Invitationals are exclusive tournaments – only anglers who qualify through the Walmart FLW Tour and FLW Series are invited to enter. The field will consist of 125 boaters. Here’s how the invitations are granted:

5 – The top co-anglers from the 2016 Walmart FLW Tour, who will fish as boaters in the Invitationals

20 – The top four pros from the season-long standings from each of the five FLW Series U.S. divisions

Format: All 125 pros fish the first two days of competition and can weigh five bass each day. Their weights from days one and two are combined, and the top 20 anglers by weight advance to the third and final day. The winner earns $100,000. FLW pays out cash prizes through 61 places.

Cup Qualification: In addition to cash, the winner of each Invitational earns entry into the 2017 Forrest Wood Cup.