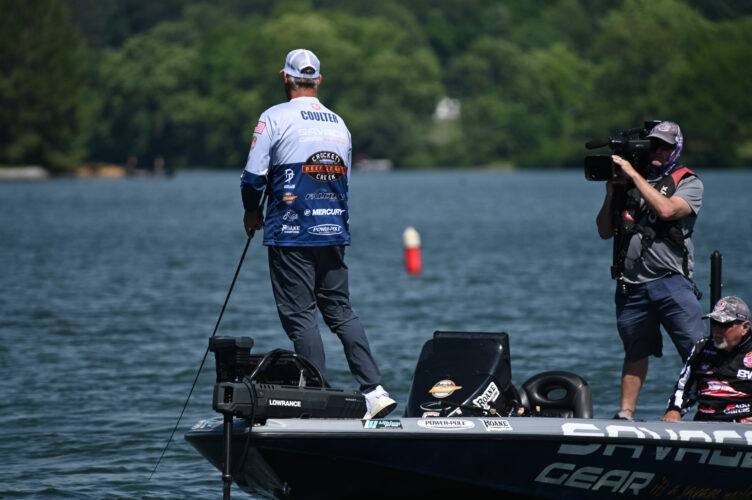 SPRING CITY, Tenn. – Despite only catching one bass in the third and final period of the day, pro Brandon Coulter of Knoxville, Tennessee managed to stay atop the leaderboard and grab the early lead for Group A on Day 1 of the General Tire Stage Five on Watts Bar Lake Presented by Covercraft in Spring City, Tennessee.

The six-day event, hosted by Rhea County Tourism and Fish Spring City, features 80 of the top professional bass-fishing anglers in the world competing for a total event purse of $805,000, including a top cash prize of $100,000 to the winner. The tournament is live-streamed each day at MajorLeagueFishing.com and the MOTV app and filmed for broadcast later this fall on the Discovery Channel.

Coulter brings a modest lead into Monday’s second day of competition for Group A, with a mere 11-ounce margin over second place angler Takahiro Omori of Tokyo, Japan, who caught 13 bass totaling 29-11. Port St. Joe, Florida, pro Randall Tharp sits in third place, with a total of 11 bass weighing 24-9. After leading at the end of the first period, Bass Pro Shops pro Timmy Horton of Muscle Shoals, Alabama , finished the day in fourth place with 11 bass for a total of 22-7, while General Tire pro Andy Montgomery of Blacksburg, South Carolina finished the day with 11 bass weighing 21-11 to round out the top five.

“Well, that was unexpected. I mean, I do have a house here on Watts Bar Lake, but I don’t fish here nearly as often as some of these other guys, so this was really unexpected,” Coulter said. “I thought I had a good game plan – it’s a Saturday and there was a big team tournament out there today – but I had a good plan and I stuck to it.

“We really had a blast today, just bounced around,” Coulter continued. “There were a lot of boats on the water, but we just fished little ditch places until we finally landed on them – and when we did, man was it fun.”

Coulter said he left his main spot after 30 minutes when he had only caught one fish. But after catching a few more in some brush piles, he decided to hit it one more time before leaving the area.

“I’d caught a four-pounder there during practice – so I ran back to it, and it was lights out,” Coulter continued. “You’ve really got to have a place that will fire on the Tennessee River, and we had that today.”

“The biggest player for me today was the Savage Gear Savage Grip Treble Hooks,” Coulter said. “It’s basically a triple-grip treble with braid instead of a traditional loop. I didn’t lose a single fish today, thanks to those hooks – and reeling in that 6-8 – that was incredible.

“Not sure if we will find it again on Monday, but we survived today and have a shot to win our Qualifying Round and go on to the Championship Round, so that’s what we’re working towards. It was a great day, all in all,” Coulter finished.

The Top 20 pros in Group A after Day 1 on Watts Bar Lake are:

The 40 Anglers in Group A compete in their two-day Qualifying Round on Saturday and Monday – the 40 anglers in Group B on Sunday and Tuesday. After each two-day Qualifying Round is complete, the anglers that finish in 2nd through 20th place from both groups advance to Wednesday’s Knockout Round, while the winner of each group advances directly to Thursday’s Championship Round. In the Knockout Round, weights are zeroed, and the remaining 38 anglers compete to finish in the Top 8 to advance to the Championship Round. In the final day Championship Round, weights are zeroed, and the highest one-day total wins the top prize of $100,000.

Anglers will launch each day at 7:30 a.m. ET from the Spring City Boat Ramp, located at 417 Toestring Valley Road in Spring City, Tennessee. Each day’s General Tire Takeout will be held at the ramp, beginning at 4 p.m. Fans are welcome and encouraged to attend all launch and takeout events and to follow the event online throughout the day on the MLF NOW!® live stream and SCORETRACKER® coverage at MajorLeagueFishing.com.

The MLF NOW!® broadcast team of Chad McKee, Marty Stone and J.T. Kenney will break down the extended action on all six days of competition from 7:45 a.m. to 4:30 p.m. ET. MLF NOW!®  will be live streamed on MajorLeagueFishing.com  and the MyOutdoorTV (MOTV) app.

Television coverage of the General Tire Stage Five on Watts Bar Lake Presented by Covercraft will premiere at 7 a.m. ET, Oct. 29 on the Discovery Channel. New MLF episodes premiere each Saturday morning on the Discovery Channel, with additional re-airings on the Outdoor Channel. Each two-hour long reality-based episode goes in-depth to break down each day of competition.