How (and why) John Cox succeeded on his three-tour mission 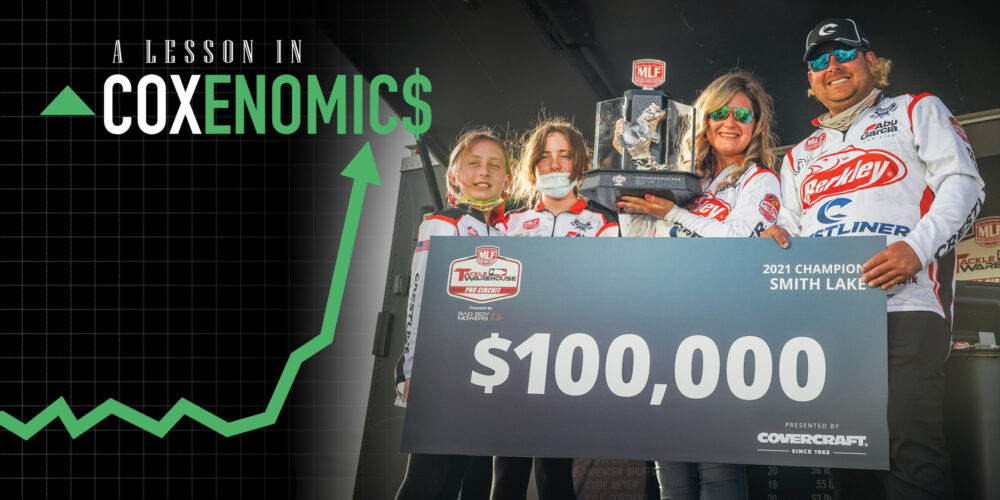 If you’ve followed the career of MLF pro John Cox, you’re well aware that almost nothing he does is “by the book.”

From the moment the happy-go-lucky, self-admitted “fish bum” burst onto the national tournament-fishing scene in 2011 with a win on the Red River in Louisiana – a tournament in which he squeezed his 17-foot aluminum boat through a 30-foot drainage pipe to reach his winning fish – Cox has gone about the business of catching bass for a living in truly unconventional ways.

He nearly won the 2015 FLW Tour Angler of the Year award fishing out of a 19-foot aluminum boat that had no depth finder. He claimed the 2017 Forrest Wood Cup after finagling his tin boat into backwater nooks and crannies on Wheeler Lake that had surely never seen another human being previously. Cox pulled into the parking lot of Day 1 of the 2020 Tackle Warehouse TITLE on Sturgeon Bay after driving all night to get there, backed his boat into a fishery he had never seen before, and promptly finished third in the event thanks largely to his “KISS” approach to catching fish (more on this later).

So in November of 2020, when the Berkley pro announced that he would be fishing three major professional tournament circuits in 2021 – the MLF Bass Pro Tour, Tackle Warehouse Pro Circuit and Bassmaster Elite Series – very few people in the fishing world batted an eye.

Somewhere in the Cox household in Debary, Florida exists a well-marked calendar and a notepad upon which Cox began to lay out his 2021 tournament plans. On the heels of a 2020 season in which he banked just over $288,000 in tournament winnings fishing 16 total events on two major tours – the FLW Tour and Elite Series – Cox was confident in his ability to find and catch fish (and cash checks) on a heavy tournament schedule with limited practice.

He had already committed to fish the seven-event Bass Pro Tour and six-event Pro Circuit (with the possibility of making the TITLE and four MLF Cup events to boot), but as Cox surveyed the three schedules side-by-side and started to put the puzzle pieces together, the glimmer of a three-tour schedule began to take shape.

“I don’t know if I thought it was a good idea, honestly, but the more I looked at all the schedules the more I liked them,” Cox admits. “Sam Rayburn, Chickamauga, Smith, Harris Chain, St. Johns River, St. Lawrence River … there were just so many good tournaments. When I put it all on a calendar, they kinda followed each other, if I wanted to just go straight from one tournament to another to another without really practicing. The more I looked at it, the more I realized that I really wanted to test it and see if it was possible to pull it off without practice.”

Coxenomics 1: The Cost of Doing Business

Of the things that John Cox does well in life, by his own brutally honest admission, “Accounting is not one of them.” For starters, one might suspect that Cox and wife Melissa would tally up the entry and participation fees for the three leagues’ 2021 seasons – a $115,000 bill – and get cold feet. But in typical Cox “glass half full” fashion, the entry expense didn’t even slow him down when he pitched the idea to his family.

“The goal of the job is to make money, so I mostly thought about how much I could make if I fished well,” Cox says. “I didn’t think about the (entry fee) number much until payments were due – $30,000 was due in February and I think another $30,000 in March. That’s when it really set in how much that amount was. Sponsor money doesn’t come upfront – you get that quarterly or monthly – so Melissa and I had to just make it work.

“That took me back to the days when I first started fishing the FLW Tour and I had to beg (tournament director) Bill Taylor for a couple of extra days to pay my entries. I actually felt kinda good about it. It was a big gamble to put that much money up, but I was fishing good and didn’t spend too much time worrying about it.”

Coxenomics 2: Flying By the Seat of Our Pants

You can scan Cox’s tournament notepad front to back and not find a single word about travel plans. No hotel bookings, no itineraries for Airbnbs, no flight reservations, no estimates on fuel costs. With the exception of a handful of tournaments where they shared a house rental with fellow Pro Circuit angler Tom Redington, John and Melissa flew by the seat of their pants when it came to tournament travel.

They stayed mostly in hotels, which Melissa frequently booked on Expedia while they were driving to each tournament city. They did it that way for two reasons: because they never really knew when John would be finished with one tournament to leave for the next, and because that’s just the way John has always traveled.

“It doesn’t make much sense to book anything in advance, so we kinda just go with it,” Cox admits. “Most of the tournaments this year were sort of in the same areas (of the country), so we just bounced from one spot to the next. We didn’t even know when we were going to get to a tournament, and sometimes you’ll get there and there won’t be enough parking or power. So a few hours before we get there, Melissa will get on Expedia and really scope it out. We can’t really do Airbnbs because, well, Airbnb involves planning to be there awhile.”

Cox has banked nearly $2 million in tournament winnings in his career by sticking with techniques that universally catch bass. He catches an estimated 90% of his fish flipping or Ned-rigging/drop-shotting/swimming/etc., a Berkley The General, Magnum Bottom Hopper, Jerk Shad, Meaty Chunk, Lil’ General or Lil’ Trooper; the remaining 10% come on a hodge-podge of frogs, crankbaits and various other topwaters.

While other anglers might feel compelled to pack every rod and tackle box they own into a boat and truck bound for 24 different fisheries in eight different states, Cox’s tackle management is a study in economy.

“I visually see over 90% of the fish I catch,” Cox says. “It’s always shallow for me – it’s a Texas-rigged or weightless The General, a Jerk Shad, a swim jig with a Meaty Chunk on Back, that sort of thing. Smallmouth is all drop-shot or Ned rigs with Berkley plastics. I really never threw crankbaits until I won on Sam Rayburn (in 2020). I really don’t need a bunch of different gear. I left Florida in February, had all the same stuff in the boat until we hit the smallmouth swing (in June), and then took everything out except spinning rods and a few baitcasters that are so tangled up you’d have to cut them out with a knife.”

Cox’s goal heading into the 2021 season was to cash at least a $10,000 check at each event. He started the 2021 campaign like a house afire, cashing $40,000 of checks on the St. Johns and Tennessee rivers, and then claiming a championship trophy (and $100,500 payday) at the Smith Lake Pro Circuit tournament in mid-March.

But the schedule bit him for the first time shortly thereafter.

Cox finished 79th at Pickwick Lake six days later after a forgettable first day where he caught one fish for 3-9.

“I was just exhausted at Pickwick,” Cox admits. “I’d actually had a couple of days off between Smith and Pickwick, but I had put so much mental energy into winning at Smith that I was still dead tired. I made some terrible decisions that first day … just terrible. My brain was tired, I guess.”

Cox rallied with 13-5 on Day 2, but almost as soon as he walked off the stage, John jumped into the truck with Melissa to start the 561-mile drive from Florence, Alabama, to Brookeland, Texas, the site of Bass Pro Tour Stage One on Sam Rayburn Reservoir. Nearly 10 hours (and multiple Red Bulls and McDonald’s Frappes) later, the Coxes pulled up to the tournament staging area on the south end of Rayburn, 90 minutes before John was to meet his MLF official and cameraman.

He took an hourlong nap, picked up his official and shooter, and launched onto Rayburn for his first-ever day of competition on the Bass Pro Tour.

The day started well – Cox caught a 3-1 almost immediately – but then unraveled when he decided to put his boat back on the trailer and drive to a spot way up the Angelina River, where he won the 2020 Pro Circuit tournament on Sam Rayburn. Upon arriving after a 60-minute drive, Cox discovered that his honey hole was fenced off and unfishable – a fact that he would’ve known if he had practiced for the tournament.

“Man, that day really slapped me in the face,” Cox says. “I was so confident because I had won there, but I really tried to do too much – especially without practicing. Right then and there I realized that I had to change the way I fished and practiced. I can’t just go run stuff.

“The tournaments I’ve done the best, I’ve picked a small area, fished it really thoroughly the first day, and then expanded on it the next day. My practices are really short when I get them, I know now that I can’t get too crazy trying to look at multiple (areas). If I fish with no practice, I can’t be making those dumb, big moves.”

I don’t know if I’ll ever do it again, but, man, what an experience.

Coxenomics 5: Playing out the Season

Cox hit one more speed bump in May with a 96th-place finish at Neely Henry (just two days after he cashed a $30,000 Top 5 check at Bass Pro Tour Stage Two on Lake Travis) and another in September when he fished only one day of the final BPT event of the season due to illness.

Cox hit his most consistent groove on the backstretch of the season, ringing up nearly $81,000 in winnings between Mother’s Day and the Fourth of July, settling into the Top 30 in Bass Pro Tour AOY/REDCREST 2022 standings, qualifying to fish the Patriot Cup in the fall and narrowly missing Heavy Hitters 2022 qualification.

His final tournament winnings for 2021 tallied $307,000, the most of his career. He had his family along for much of his three-tour walkabout – either flying them in for distant tournaments or having them tag along on shorter drives (“shorter” being under 10 hours in Cox’s vernacular) – and has deemed the season a success.

“I knew going in that just to survive (the season) would be a win,” Cox jokes. “But I think we’re doing good. I wanted to do better in some of those tournaments and I know I missed on a few opportunities, but overall I think the season went quite well. At the end of it all, if we can break even when Melissa and I tally up all the entries and expenses and subtract that from the winnings – and then keep the sponsor money – I’ll consider it a good year.

“I didn’t think my family would go for it when I sprung the schedule idea on them, but they all said ‘Do it, do it!’. At that point, I kinda had to do it. I got pretty tired a few times and thought ‘Maybe I’m crazy’ a few times, but it’s also been a lot of fun. I don’t know if I’ll ever do it again, but, man, what an experience.”

To get all six yearly issues of Bass Fishing magazine, click here.