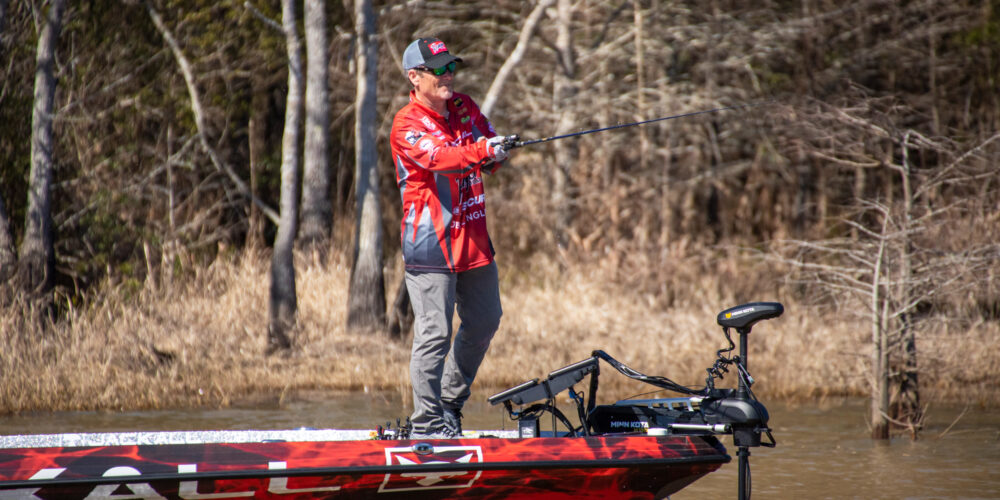 EUFAULA, Ala. – Kevin VanDam spent the early part of his second period of Knockout Round 1 bouncing around from boat ramp to boat ramp on the northern end of Lake Eufaula. But from the looks of each stop he made, he was looking for certain characteristics.

Each ramp had a dock close by with a metal retaining wall on the shoreline. VanDam is throwing a white vibrating jig the entire time, getting one non-scorable bite while we were on him.

Once he ran out of ramps, VanDam found some cypress trees with a little bit of flooded vegetation around. He had a vibrating jig tied on, but this time it was a much darker color: black with a black trailer.

As of this report, VanDam has still been unable to get his second scorable bass of the day since catching a 5-6 to start his morning.

Sixth-place angler Stephen Browning wasn’t mimicking VanDam’s boat-ramp pattern, but instead was focusing on the bank with trees and other vegetation. Browning also relied on a vibrating jig in a light color. Like VanDam, he was able to get one bite while we were with him, but it was non-scorable.

Once VanDam left the area with flooded cypress trees, Browning waited about five minutes and made his way over to that same area. The Arkansas pro didn’t want to spend too much time going through the area, but was sure to make sure he casted his vibrating jig at any visible targets.

“It’s tough out here today, boys,” Browning said as he was preparing to speed off and head to a new spot. “It’s not going to take much to move on, but I have to start finding them if I want it to be me.”