Bally Bet AOY by the Numbers: Some Key Stats Behind the 2022 Bass Pro Tour Race 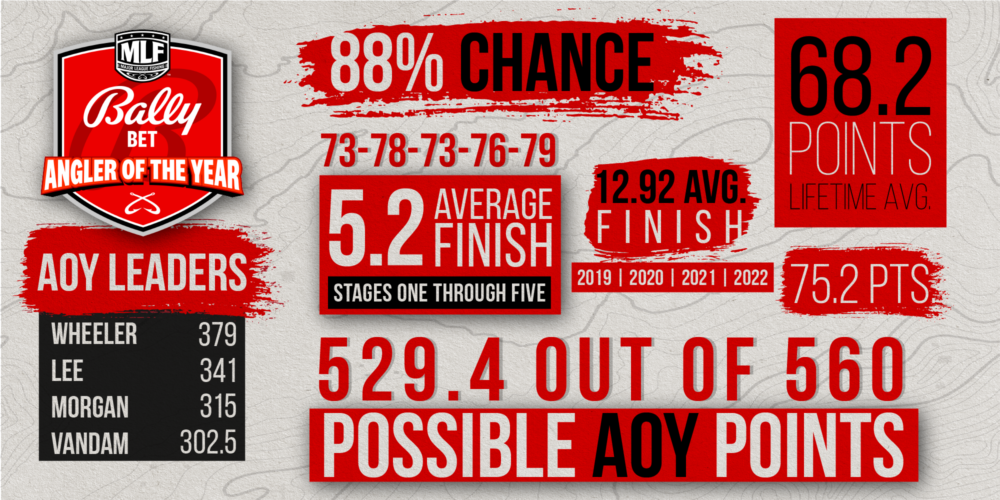 Winning the 2022 Bally Bet Angler of the Year award seems like a straightforward enough mission: Fish well enough in seven Bass Pro Tour tournaments to accumulate the most out of 560 available points. Win the Angler of the Year trophy. Cash a $100,000 check courtesy of Bally Bet.

If it was only that simple.

Five events into the seven-tournament 2022 BPT schedule, Tennessee pro Jacob Wheeler holds a commanding lead in the AOY race with 379 of 400 possible points. His closest purser is 2020 AOY Jordan Lee with 341 points. Andy Morgan is third with 315, and Kevin VanDam and Randall Tharp fill out the top five with 302.5 and 302, respectively.

As black-and-white as those figures seem, nothing is ever that straightforward in a season-long competition as unique as a tour-level Angler of the Year race.

Wheeler’s 58-point lead heading into Stage Six at Cayuga Lake, New York, is significant enough on its own, but a deeper dive into the numbers shows just how impressive the Tennessee pro’s 2022 campaign and Bass Pro Tour career have been to date.

The defending Bally Bet AOY has finished in the Top 10 in seven of eight tournaments in 2022 (including REDCREST and Heavy Hitters) and has finished no lower than eighth in the five regular-season BPT events contested. Based on just that Top 10 performance trend, there’s an 88% chance that Wheeler will earn at least 71 points at both Stage Six at Cayuga Lake and Stage Seven at Mille Lacs Lake.

Wheeler’s average finish in five Bass Pro Tour events this season is 5.2, which means that if Wheeler fishes to his season average – say that again, his average finish is fifth! – he’ll earn 75.2 points at each remaining event. That would put him at 529.4 out of a possible 560 AOY points, which would be a 6.3% improvement over his AOY-winning performance in 2021.

Lee has also been exceptional in 2022, surging to the Bally Bet AOY lead after three events on the strength of Top 3 finishes in Stages One and Three. The 2020 AOY has doggedly pursued Wheeler throughout the season, averaging 68.2 points per event in 2022 – barely behind his AOY-winning pace of 70.2 two seasons ago – and staying within striking distance as the schedule heads north to New York and Minnesota.

The Alabama pro is a staple in tour-level AOY races – he’s finished in the Top 10 in four of the six full seasons he’s fished since his rookie year in 2015 – and he historically performs well in end-of-season events (three Top 10s in six season-ending events since 2015).

Tharp has put together a stellar year through five events, finishing fourth at Watts Bar to rack up 77 AOY points and consistently piling up 54 to 58 points per tournament in Stages One through Four. Tharp has been a consistent climber in AOY points; he was 23rd after Stage One in Louisiana and rose to 14th, 10th, seventh and fifth, respectively, in the four events since.

Zack Birge finished an uncharacteristic 60th at Stage One, but rebounded with a Top 10 at Lake Fork and averaged 67.7 AOY points per event in Stages Two through Four. The Oklahoma pro finds himself in 10th in the AOY race heading into the final two events at Cayuga and Mille Lacs.

Wesley Strader started the season with two mediocre tournaments, and sat 62nd in AOY after Stage Two Lake Fork. The Tennessee pro has been on a tear since then, finishing sixth at Smith Lake, third at Lake of the Ozarks and 27th at Watts Bar to improve his AOY standing 46 places to 16th.

VanDam’s AOY-winning history is unmatched, and the Michigan pro is making his strongest run at an end-of-season trophy since he finished third to Aaron Martens and Edwin Evers in the Elite Series in 2013. VanDam has hovered in the Top 10 for much of the season and would be threatening Lee and Wheeler if not for a 52nd-place finish at Lake of the Ozarks that dropped his per-event points average from 68.25 to 60.5.

Alton Jones started off like a house afire, finishing second at Stage One in Louisiana and fifth at Stage Two on Lake Fork to take an early lead in the AOY race. Jones stumbled at Smith Lake, finishing 67th and earning just 13 ½ points to drop him to 23rd. He made up some serious ground with a seventh-place finish at Watts Bar, though, racking up 77 points to climb from 15th to seventh.

Bryan Thrift currently sits in sixth with 286 ½ points, but would easily be in the Top 5 if not for a 63rd-place finish at Lake of the Ozarks that interrupted the North Carolina pro’s string of stout points performances (he amassed 77, 67, 59 and 66 points in the other four events but only 17.5 at LOZ).