Bass Gaming Live: The Next Step in ‘Video Game Fishing’? 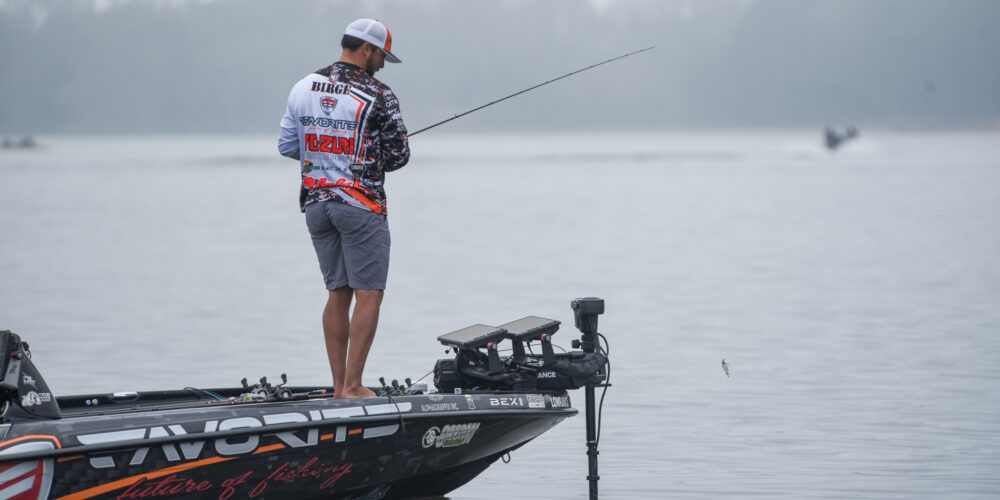 What will be the next step in the explosive productivity of forward-facing sonar? Photo by Garrick Dixon. Angler: Zack Birge.
March 3, 2021 • Rob Newell • Bass Pro Tour

Electronics have been the buzz in bass fishing for some time now. Side imaging and down scan were pretty impressive advancements, but this whole forward-facing sonar innovation is in another realm altogether.

For the last 12 months, I have watched the top pros of the sport stare at screens, make precise casts to fish they can see in front of the boat and then “work” the fish with a bait to get a reaction via sonar image.

Dustin Connell is now the Bass Pro Tour’s latest pro using this potent technology to win big. Last week at REDCREST, Connell reeled in a $300,000 payday using Lowrance’s ActiveTarget forward-facing sonar to literally “sight-fish” bass out of submerged brushpiles on Lake Eufaula. He used ActiveTarget to spot fish, cast to them and then dance a deep-diving jerkbait their heads over and over again until the bass finally crushed his offering.

With Connell’s win, I’ve come to accept the forward-facing-fish-finding genie is not going back in the bottle. But given all the information pros now render from modern-day electronics, those real-time sonar images are becoming the elephant in the room. The more pros stare at their electronics while casting and catching on live broadcasts, the more viewers are asking: what in the world are they seeing on those screens?

So where’s this all headed?

The interesting construct here is that as electronics continue to evolve, they are also getting closer to a point where what’s displayed on the screen might possibly be a “video out” to a live stream for airing.

You probably know where I’m going here: there is quite likely a day coming when a professional angler’s live video coverage will include a double-box or inset view of exactly what he is seeing on his electronics in real time. In my opinion, it’s an inevitable evolution of live bass fishing coverage.

Following that, I would think live fishing coverage would become more compelling if a screen view of what the angler is seeing on his electronics was also available for consumption. Instead of watching guys hold rods while narrating scenes of fish looking at their lures, the audience could actually see what’s happening on their screens in real time. Bass fishing meets video gaming meets live video.

Of course, there’s likely to be a tremendous backlash to this very notion. I’m guessing pros wouldn’t be really happy about this. There are literally thousands of hours of sweat equity put into the art and intricacies of reading sonar. To just lay it all out there for the world to see is somewhat akin to trying to take Yellowstone from the Duttons.

To be clear, I’m not writing this as a proponent of it; I would rather not meet Rip personally. What I’m suggesting is that the displays of those electronic screens streamed live during major tournaments have the potential to become hot content commodities. Perhaps it might cost a little more to get the “Screen Stream” package with your live fishing, but it seems to me anglers who would be willing to share such images should be compensated appropriately for doing so.

I know I would pay a few extra bucks to see Justin Lucas’ screen in real-time while he works his magic on a smallmouth shoal. During REDCREST, I wanted to get in Connell’s boat and watch the ActiveTarget display of exactly what he was doing with that jerkbait to tease those fish out of the piles.

Or should these displays be left as sacred ground for the pros; the one thing they still have to themselves to decipher without the world seeing it?

It’s probably going to be a while before such screen streams are possible, but it’s not too early to start thinking about who has the rights to those electronic impulses traveling up that transducer cord.