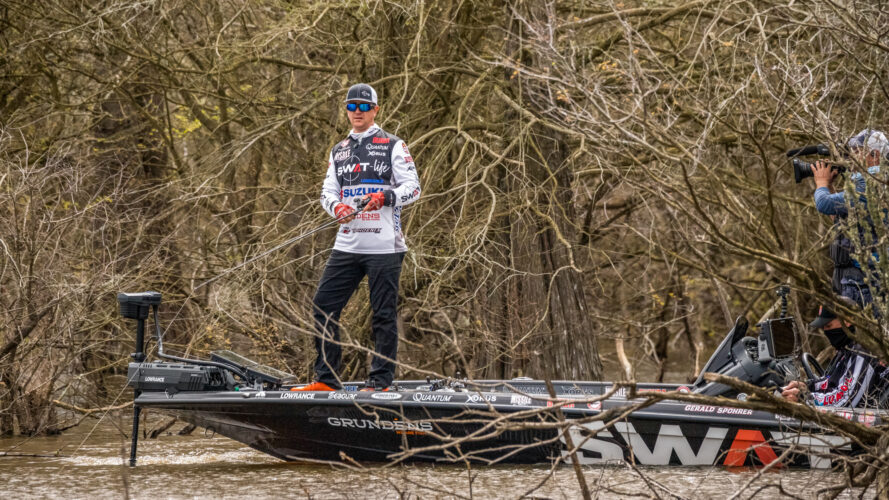 MONROE-WEST MONROE, La. – Major League Fishing is set to kick-off the fourth season of the MLF Bass Pro Tour, the most competitive circuit in professional fishing, in Monroe and West Monroe, Louisiana, next week, Feb. 5-10, with the first regular-season tournament of the 2022 season – the B&W Trailer Hitches Stage One Presented by Power-Pole.

Hosted by Discover Monroe-West Monroe, the six-day event will showcase 80 of the best professional anglers in the world, including bass fishing superstars like Kevin VanDam, Ott DeFoe, Jacob Wheeler, and Louisiana pros Gerald Spohrer of Gonzales and Cliff Crochet of Pierre Part, fishing for a purse of more than $805,000, including a top payout of $100,000 and valuable points in hopes of qualifying for REDCREST 2023, the Bass Pro Tour championship.

“We are proud to host this international event in northeast Louisiana in cooperation with the Louisiana Office of Tourism,” said Alana Cooper, Discover Monroe-West Monroe President and CEO. “We are excited to bring in some of the best fishermen to experience Sportsman’s Paradise.”

The tournament will feature the MLF catch, weigh, immediate-release format, in which anglers catch as much weight as they can each day, while also feeling the pressure and intensity of the SCORETRACKER® leaderboard. The tournament is being filmed for broadcast later this year on the Discovery Channel.

This event will mark the first time ever that an MLF tournament has taken place in Monroe-West Monroe. With no prior history on the fisheries and local experts predicting peak timing, Spohrer is expecting an extremely fun and competitive tournament.

“This is going to be such a fun tournament to start the season,” Spohrer said. “Although these fisheries are all in the same region, they are all very different. D’Arbonne is probably going to be the toughest and most challenging fishery we face. The lake is definitely the most difficult to navigate – you have to idle a lot because there are so many stumps and other things. It eats up a lot of time anytime you try to get off the main channel and to the shoreline. There are plenty of big fish that live there, but it’s not a place where you’re going to get a lot of bites.

“If you make it through the Qualifying Rounds, Caney Creek should be really good. Caney is very easy to run around and it has a lot of grass – some real healthy hydrilla. We’ll see some good fish in the Knockout Round.

“Bussey Brake in the Championship Round is also going to be very interesting,” Spohrer said. “I’m not real sure how that is going to play out. There has never been a tournament there, but I know there are some big fish there. It should be good – hopefully it will be real good.”

Spohrer expects lipless and squarebill crankbaits to be strong players for tournament competitors – he’ll have a Nomad Design Vertrex lipless crankbait and a Nomad Design Atlas squarebill tied on – but that the key to an angler doing well will be having confidence in their area.

“Guys are just going to need to keep their head down and fish, knowing that they may not get a lot of bites,” Spohrer went on to say. “It’s not going to be uncommon to go an hour or so without a bite. But it takes so much time to move – if a guy can find a pattern, put his head down and minimize the move time, I think they will do well.”

In the four-day opening Qualifying Rounds, anglers will compete on Lake D’Arbonne and launch at 7:30 a.m. from the Lake D’Arbonne State Park, located at 3628 Evergreen Road in Farmerville, Louisiana. The Knockout Round will take place on Caney Creek Reservoir, where anglers will launch at 7:30 a.m. from the Caney Creek Hooks Marina, located at 400 Spillway Road in Chatham, Louisiana. For the final day Championship Round, the final 10 anglers will compete on Bussey Brake, launching at 7:30 a.m. from Bonner Ferry Road, five miles northwest of Bastrop off of Hwy 593. Each day’s General Tire Takeout Ceremonies will be held at the respective launch ramps, beginning at 4:30 p.m. Fans are welcome to attend all takeoff and takeout ceremonies and also encouraged to follow the event online throughout the day on the MLF NOW!® live stream and SCORETRACKER® coverage at MajorLeagueFishing.com.

As part of the event, fans will also have the opportunity to come out and meet the MLF pros up close and personal at the Major League Fishing Festival, part of the North Delta Boat & Outdoor Show at the Monroe Civic Center in Monroe, Saturday, Feb. 5, from 9 a.m. to 6 p.m. and on Sunday, Feb. 6, from 11 a.m. to 5 p.m. The festival is a chance for fishing fans to meet their favorite Bass Pro Tour anglers, register for the “Pick ‘Til You Win” game with a top prize of a 2022 Toyota Tundra or a 70-inch 4K UHD Smart TV, visit the MLF Kids Zone to catch a live catfish out of the fishing pond, meet characters from the PAW Patrol courtesy of Kid Casters, and enjoy live concerts from local musicians each day. For more information on the Major League Fishing Festival and the North Delta Boat & Outdoor Show, visit MajorLeagueFishing.com.

Prior to the Major League Fishing Festival at the Monroe Civic Center, MLF will be hosting a kickoff event with kids from the Boys & Girls Clubs of North Louisiana on Friday, Feb. 4, from 4:30-5:30 p.m. The kids will be the first to get a chance to catch live catfish in the Kids Fishing Pond and win trophies and certificates. Special surprise guests are also scheduled to appear.

The B&W Trailer Hitches Stage One Presented by Power-Pole will feature anglers competing with a 1-pound, 8-ounce minimum weight requirement on Lake D’Arbonne, and a 2-pound minimum weight requirement on Caney Creek and Bussey Brake for a bass to be deemed scorable. Minimum weights are determined individually for each competition waters that the Bass Pro Tour visits, based on the productivity, bass population and anticipated average size of fish in each fishery.

The 40 Anglers in Group A compete in their two-day qualifying round on Lake D’Arbonne on Saturday and Monday – the 40 anglers in Group B on Sunday and Tuesday. After each two-day qualifying round is complete, the anglers that finish in second through 20th place from both groups advance to Tuesday’s Knockout Round on Caney Creek Reservoir, while the winner of each group advances directly to Wednesday’s Championship Round. In the Knockout Round, weights are zeroed and the remaining 38 anglers compete to finish in the Top 8 to advance to the Championship Round on Bussey Brake. In the final day Championship Round, weights are zeroed and the highest one-day total wins the top prize of $100,000.

The MLF NOW!® broadcast team of Chad McKee, Marty Stone and J.T. Kenney will break down the extended action on all six days of competition from 8:45 a.m. to 5:30 p.m. ET. MLF NOW!®  will be live streamed on MajorLeagueFishing.com and the MyOutdoorTV (MOTV) app.