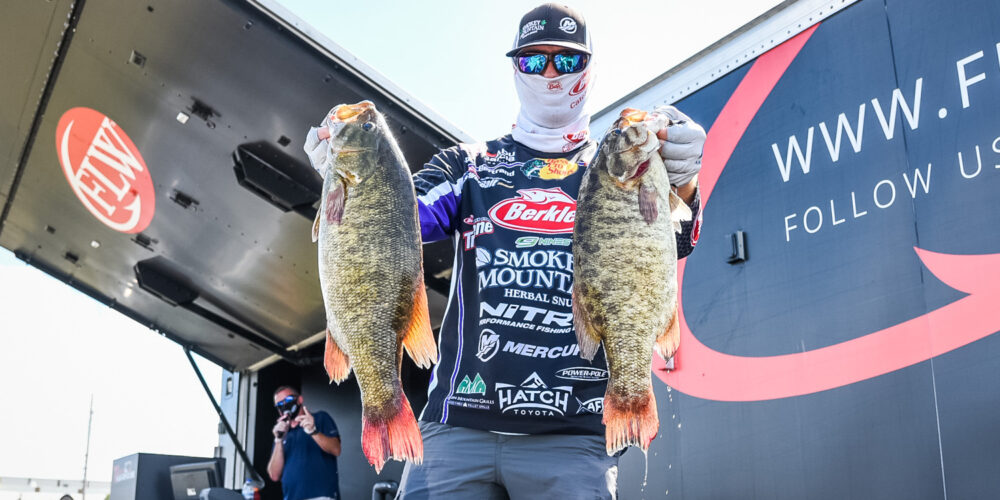 SANDUSKY, Ohio – If there’s a bass tournament where smallmouth are the key species, it’s proving to be foolish to bet against MLF pro Josh Bertrand.

Less than a month removed from third-place finish at Bass Pro Tour Stage Five (out of the smallie Mecca of Sturgeon Bay, Wisconsin), the Arizona pro is back on top of the leaderboard at a smallmouth-dominated tournament: Bertrand weighed in 22 pounds, 6 ounces of smallies to claim the Day 1 lead at the FLW Pro Circuit Super Tournament on Lake Erie out of Sandusky, Ohio.

Despite a sluggish bite, Bertrand was able to connect with enough quality fish – including a 5-11 kicker – to build a small cushion on fellow MLF pros Boyd Duckett (second with 21-14) and Justin Lucas (third with 21-7).

“I was pleasantly surprised,” Bertrand admitted. “There’s a ton of pressure in the areas I’m fishing, and there just aren’t that many fish. If a guy catches a good bag, he catches maybe six or seven fish.”

Bertrand remained in Lake Erie, forsaking the 80-plus-mile one-way runs to Lake St. Clair that multiple anglers gambled on, and instead fishing a handful of spots he’d located in previous events fishing out of Detroit.

“I’m fishing a Berkley PowerBait Flat Worm on very typical Lake Erie structure,” Bertrand said. “Nothing special, just doing what I think is my best bet to keep my head down and keep grinding.”

“The biggest challenge (on Day 2) will be adjusting to more pressure on the fish, and a wind direction change,” Bertrand said. “It’s a very fragile bite. You’re only catching a handful of fish a day, and then the fish are pressured and the wind changes direction – one thing goes wrong and you can’t catch a limit.”

Day 2 at the FLW Pro Circuit Super Tournament out of Sandusky, Ohio can be viewed live on the FLW Live stream on the home page of the FLW website, starting at 8 a.m. EDT.