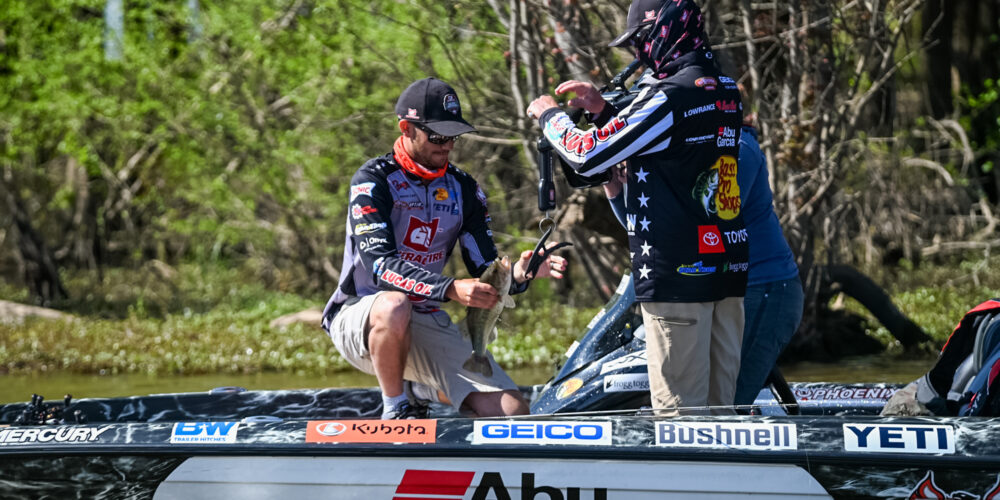 RALEIGH, N.C. – The 20 anglers of Group B made their way back to Falls Lake at General Tire Heavy Hitters Presented by Bass Pro Shops today. While it wasn’t the big-bass bonanza like Jordan Lake was for Group A, there were some solid bass landed with a variety of shallow water techniques.

Jordan Lee, James Elam, Mark Davis, Dave Lefebre and Takahiro Omori had the best days in the group, here’s how they caught their fish:

After catching three bass the first day, the reigning Bass Pro Tour Angler of the Year (and Heavy Hitters champion) found himself in 13th, but Lee he rallied to sixth place in the group after logging the best day in the field on Monday. His 27-6 on eight bass helped to vault him into the Knockout Round.

“I caught all of my fish flipping a Berkley PowerBait Power Tube in black with red flake,” Lee said. “I pitched it to anything I found sitting in the water.”

After the first day on Falls Lake, Elam sat in last place in his group after catching just two fish for 4-3. But Elam brought in 24-9 on the day and nearly made the miraculous finish – the Mercury pro made a late rally to get inside the top 10 before getting bumped in the final 15 minutes by Jacob Wheeler.

While happy with his turnaround, Elam lost additional key bass today that kept him out of the Knockout Round.

“I missed some opportunities and lost some fish,” he admitted. “I was fishing for fish that I believe were spawning on willow trees. It was very shallow, everything from ankle-deep to knee-deep.”

Elam pitched a green pumpkin creature bait with a 3/8-ounce weight with 20-pound Seaguar InvizX fluorocarbon. His rod and reel of choice was a 7-6 heavy Shimano Expride paired with a Shimano Metanium reel.

Davis is off to an excellent start to 2021 with a 10th-place finish at REDCREST and a sixth-place showing at Sam Rayburn for Stage One. After two solid days of 26-13 and 23-11 on Falls Lake, he finished second in Heavy Hitters Group B.

“I didn’t catch a lot today, but they were good quality fish,” Davis said. “It got a lot slower today, and I had a third of the number of bites I had the first day.”

He’s utilizing a one-two punch of pitching bushes and using a drop-shot in between the targets.

Lefebre has scored six bass a day each day on Falls for consistent weights of 21-9 and 22-8, putting him in fifth place. Included in today’s catch was an 8-3 that was the biggest in his group, a fish worth $25,000 as the Berkley Big Bass.

Some of Lefebre’s fish on his first day came on a 13 Fishing Trash Panda frog; most of his fish on Monday came on a green pumpkin/red-and-black-flake Gary Yamamoto Senko.

“Today, the frog bite died with the post-frontal conditions,” Lefebre said. “I picked up the Senko with a 3/16-ounce weight. I also caught some this week on a homemade swim jig.”

Cypress trees were the key target for him on Falls.

“I spent last night looking at Google Earth to find every cypress tree I could find on this system,” he said. “I caught some fish today on some of those trees I found last night.”

After catching two fish for 5-6 on the first day, Omori landed seven bass for 21-1 Monday. He ended up 13th in his group.

“I dug myself a hole that was too deep on the first day,” Omori said. “I made a mistake in choosing the wrong end of the lake and it cost me.”

His rebound came by fishing up the river, flipping and pitching laydowns with a plastic craw.