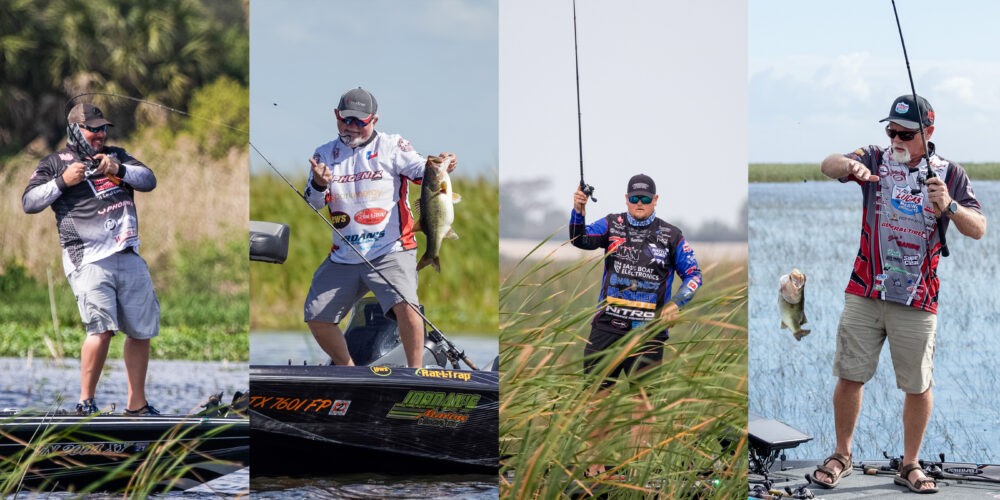 More on the 2020 Qualifiers

At the first stop of the Pro Circuit on Okeechobee, the top four pros that solely fish the Pro Circuit qualified for the Berkley Bass Pro Tour Stage Two Presented by Mercury at Lake Travis. Skeet Reese and Chris Lane finished first and second at Okeechobee, but the next four pros in the standings are exclusive to the Pro Circuit: Jim Neece Jr., Dicky Newberry, Bill McDonald and Miles Burghoff.

Here’s a look at what the four pros heading to Travis are thinking:

Neece Will Be a Texas Rookie

A longtime Tournament Assistant for FLW at the Phoenix Bass Fishing League level, Jim Neece Jr., won the Toyota Series Central Division event on Lake Chickamauga in 2020. Then, he rolled through the rest of the division and joined his son Corey Neece on the Pro Circuit for 2021.

“I ended up having an even better year after Chickamauga, I stayed right there and almost won the points,” Neece says. “I thought, it’d be cool to do it with Corey, and you only live once. So, here I am.”

After a blazing debut at Okeechobee where he was in contention to win the whole time, Neece is headed to yet another new level.

“I’ve never fished (the MLF) format, and to be honest with you, I’m pretty pumped about it,” Neece says of what’s to come at Travis. “I’ve sat and watched it on TV for years and years, thinking ‘dude, I’d love to do that,’ and now I actually get to.”

Like many, Neece isn’t going into Travis with a lot of experience, but he’s ready to swing anyhow.

“I’ve only been to Texas one time, and that was laid over at an airport in Dallas,” Neece says. “I’ve never been on the ground in Texas. It’ll be all new to me, I’m going to go fish Lake Murray, leave Lake Murray, pick my wife up and drive halfway across the country. So, we’re in.”

Not Quite Home Cooking for Newberry

A living legend in the state of Texas, Dicky Newberry has spent most of his time in East Texas, winning tens of thousands of dollars over his career from Sam Rayburn and Toledo Bend. As such, he’s never actually fished Travis before.

“I’m really looking forward to it,” Newberry says. “I haven’t ever fished Lake Travis in my life, there are a few others who have, but for the most part it’s a new lake. I used to have a friend that fished it, and he used to call me all during the day, so I like to think I have a feel for it. Plus, I like that it’s no information, so everybody is going to be on the same page.”

Though Newberry has a penchant for huge limits and lots of five-bass experience, he’s looking forward to the change up.

“I think I’m going to really like this format,” he says. “I do have a tendency to get on really good groups of fish sometimes, so hopefully, with my fingers crossed, I’ll be one of the guys to do that.

“I’ve had a lot of tournaments where I’ve set and caught fish all day long, Even though I’m old, and I don’t get around as fast in the boat as these younger guys, my mind still thinks I’m 30. I love to catch a lot of fish, if I can get it going, I think I can compete with those guys, and it will be a lot of fun seeing if I can.”

McDonald Has Experience on His Side

Lake Travis isn’t exactly a perennial tournament destination, but Bill McDonald has been there before and done well. Back in 2017, he notched a 25th place finish at Travis on the FLW Tour. Additionally, McDonald qualified for the Tackle Warehouse TITLE in 2020, so he got a taste of the MLF format ahead of time.

“That’s the only time I’d been there, I had a good event, and just missed making the cut,” McDonald says. “I’m, excited to go fish it, I like the format – I didn’t know if I liked it or not, but it was kinda cool at the TITLE, I like getting a couple days of rest between fishing. And I’ll get to see a bunch of buddies that I used to see over the years.”

A Chance to Shine for Burghoff

At least somewhat in contention for Angler of the Year since his rookie season in 2019, Miles Burghoff is among the cream of the crop when it comes to Pro Circuit anglers. So, don’t be surprised if this appearance at Travis is a precursor to a permanent spot on the Bass Pro Tour. As is, Burghoff is excited for the opportunity.

“It feels great, it’s going to be a cool opportunity to show what the Pro Circuit anglers are capable of,” Burghoff says. “It gives me good motivation to go out and show what our field can do with their field. I’m stoked for the challenge, I always like to compete against the best I possibly can, and the [Bass Pro Tour] definitely has one of the stoutest fields, probably the stoutest when it comes to legendary status.”

Between a full slate of Bassmaster Opens, Toyota Series events and the Pro Circuit, Burghoff is going to really be squeezing Travis into his schedule.

“I’ve never been to Travis, and I haven’t looked at it on a map yet,” he says. “I need to figure it out because I’ll be in like a five-week tournament stretch with the addition of that tournament. I still need to figure out what the practice days are, to see what the footprint is on my schedule. I won’t be able to go pre-practice or anything like that for sure.”

Still, even though he’s not going to be able to prepare with as much detail as he does for an even he knows about a year in advance, Burghoff isn’t planning on just showing up for the fun of it.

“I want to go into it with the same mindset I always do – go with the flow and try to put myself in contention to win,” Burghoff says. “I always shoot for Top 10s, that’s my goal, if you can put yourself in the Top 10, that’s when you win tournaments. I really want to represent the Pro Circuit there, and that’s going to be my motivating force.”