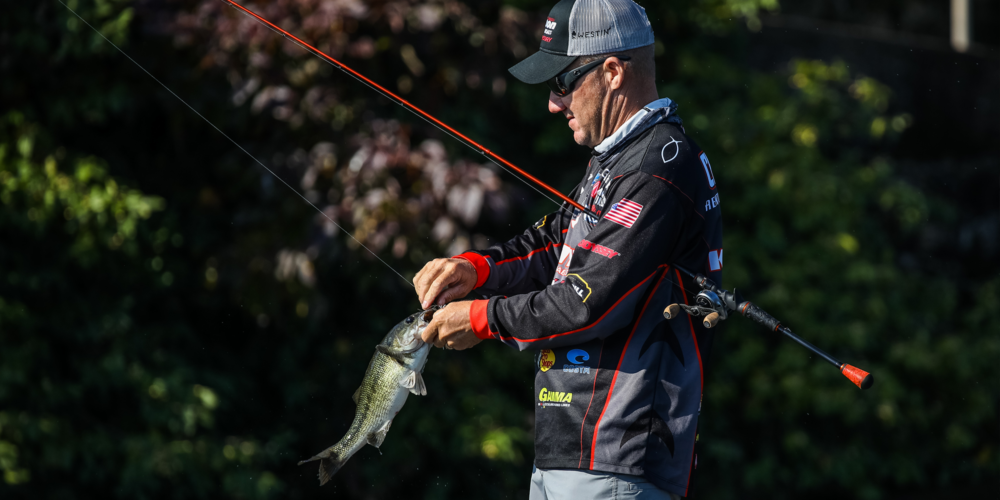 Brent Chapman shares the baits he uses when fall fishing on the Lake of the Ozarks. Photo by Jacob Fine
October 9, 2021 • Dave Landahl • Bass Pro Tour

Plano pro Brent Chapman loves fishing Ozark Mountains lakes, no matter what time of the year. However, the fall is a special time for finding and catching bass on these massive reservoirs.

Baitfish move shallow, and so do many of the bass, making them very accessible to anglers. Fall also sees much lighter recreational boating traffic, allowing you to fish during the prime times without being jostled by boat wakes.

“On the Ozarks lakes, I look for gizzard shad in the fall,” Chapman said. “I search for coves or creeks where they’ve pulled into. As the water temperatures cool off, I believe the shad get more committed to moving shallow and feeding and the bass follow and eat. This happens on all of the Ozarks lakes, but especially on Lake of the Ozarks. It’s really an ideal place to fish shallow in the fall.”

What’s in the Box?

Chapman is known for packing a Plano 3700-size “day box” that he loads with the baits he expects to use the most throughout a day of fishing. He suggests a fairly simple collection of baits for the Ozarks fall-fishing day box that cover water efficiently and mimic baitfish.

“I prefer to fish with a 1/2- or 3/8-ounce bladed jig, I think they’re the hottest bait for the Ozarks in the fall,” Chapman said. “The bladed jig is so effective and great bait to mimic shad. You can cast it under walkways or skip it under docks.”

Chapman also includes spinnerbaits, swim jigs, buzzbaits, topwaters, and crankbaits, all of which allow him to cover water quickly.

“The 1.5 or 2.5 size crankbait can cover water almost as efficiently as the bladed jig, but I lean more toward using the bladed jig – it has a higher landing ratio since it only has the one hook,” Chapman said.

If you stray away from Lake of the Ozarks and hit other area fisheries like Table Rock, Beaver Lake or Bull Shoals, add some baits for fishing deeper water as well.

“Lakes like Table Rock, Beaver or Bull Shoals can have some terrific offshore fishing (in the fall),” Chapman said. “There’s always a portion of the shad population out in deeper water – they can be suspended over submerged trees in very deep water. A drop-shot, a football head jig, or a jigging spoon can produce excellent results there. This is where using a Garmin Panoptix to help locate the fish is really valuable.”

Chapman prefers a sunny fall day to fish in the Ozarks, and insists that you don’t have to be an early riser to catch the most bass.

“There’s the typical morning and evening activity for bass in the fall, but I love more of that midday fishing, especially when it’s sunny,” he said. “Bass set up tighter on cover in the middle of the day. They’re usually roaming more in low light. When the sun is out, it’s easy to know where they’ll be. They’ll be tight to a brushpile, under a dock or walkway, or suspended deep in the trees.

Chapman’s key time for bigger fish is around the lunch hour.

“In over 25 years of fishing tournaments, I’ve found that 11 in the morning until about 1 in the afternoon produces more big fish than any other time of the day,” he said. “Bass, like people, may skip breakfast, but not lunch.”

Chapman confesses that – although he enjoys all of the bass lakes in the Ozark Mountains – he prefers Lake of the Ozarks above all others this time of year.