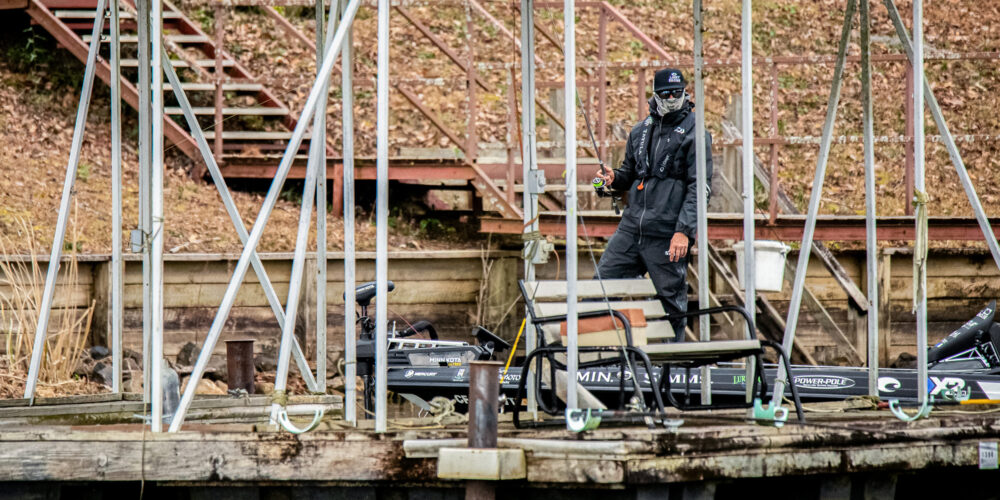 The term “dock talk” refers to gossip and fishing information shared among anglers after a day of fishing. In a tournament situation, it’s best to avoid it (or take the tales with a grain of salt).

The information that follows will be more reliable as California pro Brent Ehrler engages in some more helpful dock talk: How he narrows down his focus to the most productive docks, and how he positions his boat for the best success.

On many lakes with residential areas, docks are everywhere from the mainlake to well inside creeks and pockets. When faced with an overload of docks, Ehrler simply tests them all to begin.

“If I’m going into a bay or pocket with a lot of docks, the only real way to start is to fish them all until I start to see some common themes,” he said. “It might be the first three docks, or it might be the last one or two docks, or they could be way in the back or out on rounded points. You’ll start to figure out the right depth needed to get bites, but you really have to start by fishing them all.”

Aside from depth and dock positioning in a creek or bay, Ehrler is always on the lookout for brush.

“All of the best docks will have some brush around,” he said. “In deeper water, brush is almost a requirement to give the fish something to hold to. I use my Garmin SideVu a bunch to look for the brush when I’m idling and switch to Panoptix LiveScope when I’m up next to a dock fishing while running my trolling motor.”

Ehrler keeps it simple when fishing docks and will skip a wacky-rigged Yamamoto Senko to shallow docks as well as pitching and skipping a jig. For deeper docks, he employs a Neko rig or a drop-shot.

“The wacky rig and jig are two of the best baits to fish around shallow docks because they skip so well,” Ehrler said. “The jig I use is one I designed for Boss with a real flat bottom so it can plane and skip much better. I’ll skip it with a Daiwa Tatula Elite Skipping Rod with the Tatula Elite Pitch and Flip reel spooled with 20-pound Sunline Sniper. That rod loads well for skipping and the faster retrieve on the reel is very important since it seems like every dock fish that eats a jig immediately comes toward you. Picking up line quickly is important to get a good hookset.”

He’ll fish a drop-shot or Neko rig for deeper docks but generally only fishes deeper docks if they have brush or some other type of cover located underneath.

When approaching a line of docks, Ehrler always wants them on the left side of his boat.

“It’s much easier to skip baits without anything in the way,” he said. “The other thing to keep in mind is to take your time and not get in a rush. If I’m in a hurry, I tend to fish too fast, and I’ll hit every pole, boat, or cable around a dock.”

Another key when skipping, according to Ehrler, is to do it gently.

“(A controlled cast) is important when skipping a bait because a softer presentation with a little flick of the rod will go further,” he said. “The harder you (cast), the more the bait will dig.”