Brett Hite: Next Level with the Bladed Jig 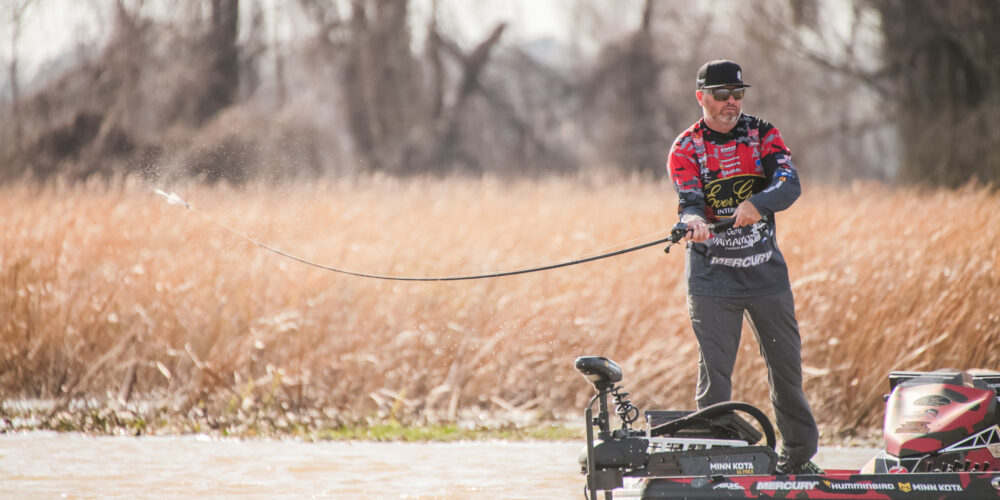 But the bladed jig is here to stay.

“You look at any major tournament angler, and he has one tied on pretty much year-round now,” says Brett Hite whose mastery of the bait and tournament success helped put the bait in tackle boxes everywhere.

Success has led to greater bladed jig variety and broad experimentation in a wider range of depths, habitat and water conditions.

“The biggest thing we’ve learned is how versatile this bait really is,” says Hite. “Everyone initially thought of it as an aquatic vegetation-style bait. But now we know it works in almost every scenario as long as those fish are up in the water column where the bait is.”

With discovery has come explosive market segmentation not only to capitalize on qualitative improvements and the craze itself but to refine the capabilities of the vibrating jigs in a wider range of applications. New varieties hinge on jig size and weight, blade size and style, snag resistance, durability, hook variation and other attributes.

Bladed jigs are ideal for covering water and finding active fish quickly. But if you are using your ChatterBait JackHammer, which Hite calls “the No. 1 selling ChatterBait on the market the last three or four years,” strictly as a cast-and-wind bait to work a shoreline, you’re missing out on much of its utility.

“Some guys are missing out on the capabilities of the 1-1/4-ounce JackHammer,” says Hite. “I like to fish a flat, say 15 to 25 feet deep. I let the bait go to the bottom and sweep it sideways, like sweeping a jig, so it starts vibrating. You can cover water that way. I like to keep it close to the bottom and side sweep it. Pull it up, and let it go back down. I’ve been very successful fishing it on rock piles, over brush piles or even deep grass. No major tournament has been won doing that. But the time will come when things will set up right and fishing that depth zone with that 1-1/4-ounce JackHammer will be a huge factor.”

Dock fishing largely has been the domain of jigs and Texas-rigged plastics. Bladed jigs have changed that game, too.

“What’s amazing is how well a ChatterBait skips,” says Hite. “It allows you to put a reaction bait in places most people can’t reach. I can skip it 30 feet under a dock.”

The bladed jig is most viewed as a lure to generate reaction bites, but more subtle jig-type presentations account for catches, too.

“I had wanted a more subtle bait, something not so aggressive,” he explains. “The JackHammer Stealth Blade vibrates but not as aggressively. I wanted a clear plastic (polycarbonate) blade, just slightly smaller. It’s virtually invisible in the water. It has that erratic hunting action, too…I caught three 5-pound smallmouth on it one day last spring.”

With autumn underway, Hite says he will be making one particular adjustment.

“I’ll be fishing mostly all shad patterns with fish feeding up for fall and big schools of shad migrating up creek arms,” he says. “I’ve made my living on green pumpkin, but for me ChatterBait fishing in fall is about shad patterns.”

In clearer water, he will go with more translucent shad patterns; in stained water, bright white.

“I’ll let it go to the bottom and either pump it like I’m snapping a jig or slow it down, let it fall to the bottom, and reel again,” he says. “One day they want it one way; another way the next.”

Plastic trailer preference is one area where pro anglers have individualized bladed jig offerings. While trailers affect bait action and profile, much of the decision making simply boils down to personal preference.

“Anglers switch up their trailers,” he says. “That’s a confidence deal. What I like may not be what someone else likes though they both work. I still fish  the Yamamoto Zako as a trailer. Yamamoto has also come out with a paddletail, the Kickin’ Zako. I like it as a trailer when the water warms up and the fish want more kicking action in the bait. Sometimes they want a more subtle, natural look; sometimes they want that paddletail kicking. Let the fish tell you what they want.”

Hite’s not at all surprised bladed jigs have become so popular in the tight constraints of MLF competition.

“When you have such little time to practice and can’t talk to anyone, you need a bait that can cover water and catch quality fish,” says Hite. “You can fire it in a lot of places – over vegetation, under docks, ticking rocks. It checks off all those boxes.”