Christie Surges 25 Places up SCORETRACKER, Advances to Knockout Round on Smith Lake 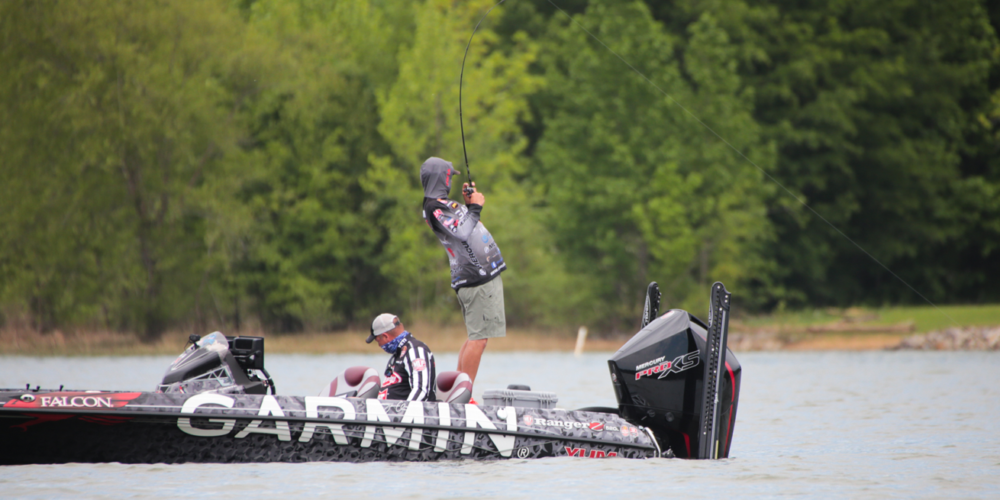 Jason Christie sets the hook on one of his Elimination Round fish. Photo by Phoenix Moore
May 3, 2019 • Joel Shangle • Bass Pro Tour

CULLMAN, Ala. – As you take a look down the list of anglers who finished above the Elimination Line Friday at the Bass Pro Tour Phoenix Boats Stage Five Presented by Mercury, you notice the obvious numbers: Jesse Wiggins at No. 1 with nearly 100 pounds on his home lake; Todd Faircloth, Tim Horton and James Watson easily in the Top 20 with over 80 pounds apiece; six more anglers with more than 65 pounds over two days of competition.

That’s how much more weight the Oklahoma pro put on SCORETRACKER® on Friday than he did during his Shotgun Round on Wednesday, an improvement that catapulted Christie from 37th place to 12th and qualified him for his first Knockout Round since Stage Two. And he did virtually all of it in two periods.

After weighing only one fish in Period 1 while fishing shallow, Christie switched up to a deeper offshore point in Ryan Creek and settled into groove in Period 2 with a shaky head, connecting with 27 fish over the final five hours of competition time. The Mercury pro finished the day with 51-0 and a two-day total of 65-13.

“It felt good to finally catch a few,” Christie said. “I stayed shallow the first day, but since we’ve been here, it’s gotten so warm, the fish have moved out. Today I fished an area where I knew there were a lot of fish because I’ve seen them chasing bait, but instead of fishing in 3 feet of water I started fishing in 20.”

He’s been known as “The Squirrel” for years, but it seems just as appropriate to call Jeff Kriet “Cardiac Kriet” after his latest flirtation with the Elimination Line. Kriet, who entered the day in 11th place with a seemingly comfortable 8-pound cushion between himself and the 20th spot, found himself gradually falling down the Top 20 throughout the afternoon.

By the final 30 minutes of the round, Kriet was scrapping with Bradley Roy, John Murray, Anthony Gagliardi and Mark Daniels, Jr., for the 20th and final spot in the Knockout Round.

The Oklahoma pro caught four fish for 5-8 in the third period to finish the Elimination Round with 54-8 – just enough to finish 4 ounces ahead of Mark Daniels, Jr., to lock up the final spot in the Knockout Round.

“Lesson learned: you can’t miss a step against these sharks or they’ll tear you apart,” Kriet said of the rest of the field. “I can’t believe I put myself in that position again: that’s three times in a row that I’ve been down in that 20th-place battle, and it’s making me older by the minute.”

The Game Changes for Knockout

With weights starting back at zero for Saturday’s Knockout Round, the game of cat-and-mouse among anglers practicing and running new water in the Elimination Round now becomes a one-day scramble that will likely be influenced by a storm system that is due to arrive late Friday night and continue throughout the day on Saturday.

“You definitely play this game different than we used to, and I think we’re all still trying to figure that out,” admitted Brent Chapman, who caught 28 fish for 42-8, finishing eighth in Group B. “It’s going to take a lot of weight to advance to Sunday’s final round, without a doubt. I’m just guessing it’ll take 45 to 50 pounds to make it to the Championship Round, especially with the weather we have coming. The fish should bite really, really well.”

Knockout Round competition among the final 40 anglers begins Saturday, May 4 at 6:30 a.m. CT, with live, official scoring available via SCORETRACKER® on MajorLeagueFishing.com and on the MLF app. The MLF NOW! live stream starts at 9 a.m. CT, with live, on-the-water coverage continuing until lines out at 2:30 p.m. The Berkley Postgame Show live stream will start at approximately 4 p.m. daily.