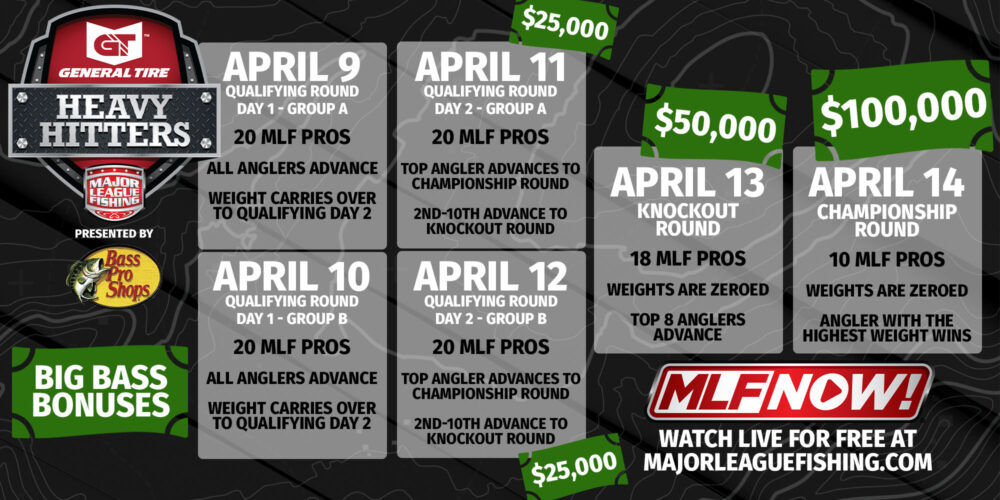 General Tire Heavy Hitters will be contested on the same waters that produced a big-fish bonanza at Bass Pro Tour Stage Three in 2019: Jordan Lake, Falls Lake and Shearon Harris Reservoir outside of Raleigh, North Carolina.

That event produced 57 largemouth weighing 6 pounds or more, including a 9-4 by Todd Faircloth.

But unlike that event in 2019, where anglers flip-flopped back and forth between Jordan and Falls lakes in the five days leading up to the Championship Round on Shearon Harris, the 20 anglers in Group A will fish both of their Heavy Hitters qualifying days on Jordan Lake while Group B focuses two days solely on Falls Lake.

That change will allow anglers to focus their three-day practice time on one less lake, providing them a better chance to identify big-fish patterns on the lakes they’ll fish.

“The fact that we don’t have to break down three lakes in three days is a huge, huge deal,” admitted Geico pro Mike McClelland. “It allows a guy to maybe figure out how to catch one of those $25,000 or $50,000 fish by spending more time on one particular body of water. This event has a major focus on catching big ones, and generally, you’ll catch bigger ones the more time you spend on one body of water.”

As part of Group A, McClelland will fish two days on Jordan’s 13,900 acres. That fishery – which produced one of the best days of big-fish action in recent memory on Day 1 of the 2019 Bass Pro Tour event – is loaded with hard cover in the form of riprap, submerged roadbeds, etc. The 12,000-acre Falls of the Neuse River is a mix of riverine water on the upper end and wider, flatter, deeper water on the lower end.

“Falls and Jordan are really different fisheries,” McClelland asserted. “At Jordan, you’re more than likely going to be catching them shallow one way or another, but at Falls, you have the option to go up the river as far as you can go, or you can go to the bottom end, which is totally different. Focusing on just one lake, hopefully, you can get on some kind of solid pattern, and then maybe think ‘What will I drag out of the tackle box that’ll get a big ol’ one to bite?’ You’ll have a better opportunity to focus on big fish.”

The two individual winners of Group A and Group B’s Qualifying Rounds have the option of advancing straight to the Championship Round if they so choose.

The anglers who advance to the Knockout Round will compete on Shearon Harris; that lake will also serve as the site of the 10-man Championship Round the following day.

Unlike the 2019 Bass Pro Tour event, where anglers were only allowed a half-day “ride-through” on Shearon Harris, Heavy Hitters competitors can allocate as much of their three-day practice period to the 4,151-acre power-plant lake as they want.

“Regardless of how practice goes on Jordan the first day, I’ll devote at least a half-day to a full day to Shearon Harris” McClelland admitted. “That flexibility gives me some options as an angler. Depending on the conditions and what mode I feel the fish are in, I could go to Shearon Harris my first day of practice and then fish my first lake closer to my competition days. If the weather isn’t favorable for a good practice day on Jordan, maybe I’ll go to Shearon Harris and figure out what might work to catch a big fish there. I like the options.”