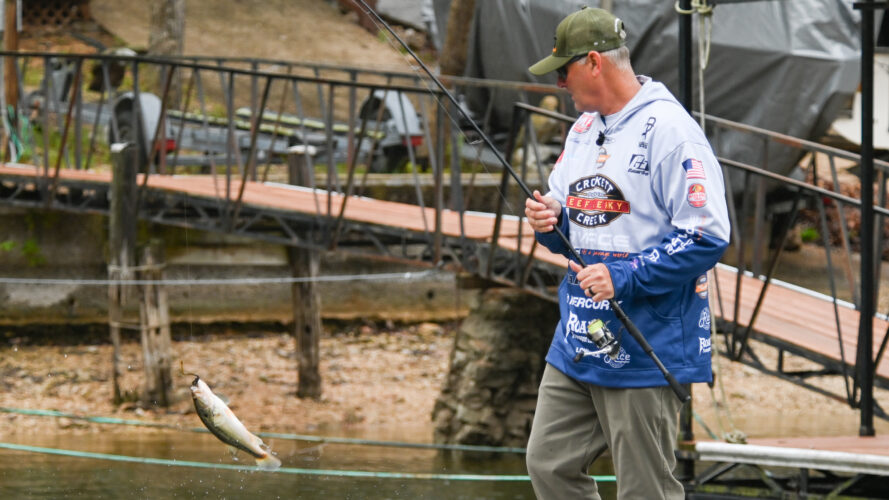 SPRING CITY, Tenn. – Many questions loomed heading into General Tire Stage Five Presented by Covercraft on Watts Bar Lake. The fishing quality, how the lake would produce on a busy boating day, and what part of the water column the fish would be in, were all hot topics that remained up in the air.

The lake was relatively unknown to everyone in the 80-angler field before this week, as most tournaments that come to the area focus on neighboring Lake Chickamauga. Turns out the fishing was challenging for most of the field, even for local pros with ample experience on Watts Bar – fish are firmly in the postspawn period, with bass both shallow, deep, and in the transition areas between the two.

Among the Bass Pro Tour field are eight East Tennessee anglers with plenty of experience. Some – like Brandon Coulter – fared very well. Coulter, from Knoxville, took the early lead with 12 bass for 30 pounds, 6 ounces. Other local anglers had mixed results and found themselves hovering around the Top 10 at the bottom of the standings.

Sporting a Bill Dance-inspired University of Tennessee hat, Coulter did everything he could to make the Volunteer State proud on his home waters. Coulter’s Watts Bar history paid off handsomely as he had the most weight and added the Berkley Big Bass of the Day for good measure with a 6-8.

Coulter owns a home on the lake, but admitted that he doesn’t fish it as much as he’d like to. Consequently, his Day 1 lead was a surprise to him.

“That was unexpected to be in first,” Coulter admitted. “I do have a place here, but I don’t fish here as much as some of the other guys. The good thing is I’ve put myself in a good position to make the Knockout Round and already caught a big one for Heavy Hitters.”

Coulter was firing on all cylinders after setting a plan to survive today with a large local event also fishing the lake.

“I had a game plan to stick to smaller places because I knew the other tournament guys would cover up all of the community holes,” he said. “I stuck to that all day and just went fishing for the most part. I landed on a few places where the fish were firing and that’s what you need this time of year on the Tennessee River lakes.”

Omori Right Behind in Second Place, Tharp Lurks in Third

Takahiro Omori finds himself in second place, just 11 ounces back of Coulter. Sticking to his strengths of power fishing in shallow water, Omori is pleased with his first day but knows there is a lot of fishing left.

“I had a good day, but it’s just the first day,” Omori said.

Randall Tharp has had an excellent start to the season, entering the event in seventh place in the Bally Bet Angler of the Year standings. He’s in a position to rise even higher after his solid first day of fishing on Watts Bar, where he landed 11 bass for 24-9.

“I’m hoping to push Brandon a little when we come back out here on Monday,” Tharp said with a laugh. “I’m going to try to catch him and if he’s going to win the automatic qualifying spot, he’s going to have to work for it.”

The second group of antlers gets its first shot at Watts Bar tomorrow. Day 2 kicks off at 8 a.m. EST on Sunday. Live coverage starts at 7:45 a.m. EST on the MLF NOW! live stream. Watch for free on MajorLeagueFishing.com, the MLF app, or the MyOutdoorTV app.

The 2022 Bally Bet Angler of the Year will take home a $100,000 prize at the end of the 2022 Bass Pro Tour season. Jacob Wheeler leads the race entering this event with 300 points, followed by Jordan Lee with 283 points and Andy Morgan with 255 points.